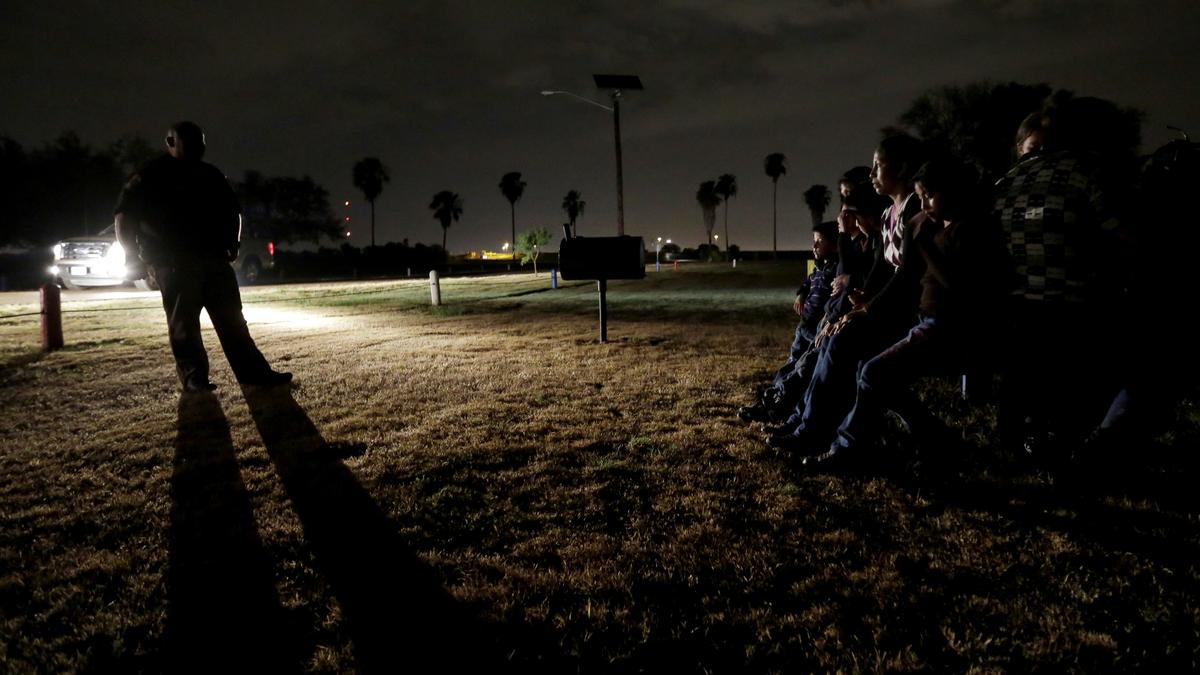 Immigrants from Honduras and El Salvador who illegally crossed the U.S.-Mexico border are stopped in Granjeno, Texas, on June 25.

The U.S. Border Patrol's annual report had some startling apprehension statistics, but the report was taken down hours after it was posted online last month, leading some to wonder if the midterm elections played a part in the decision.

Most of the people the U.S. Border Patrol stopped from sneaking into the country last year were from countries other than Mexico, according to agency statistics, a startling shift that might have provided fodder for politicians leading up to Tuesday’s election.

But they didn’t get much of a chance. The Border Patrol’s annual statistics were posted on the U.S. Customs and Border Protection website for about five hours on Oct. 10, then taken down. Now some are questioning whether the decision to pull back the data was another example of the Obama administration playing politics with public information.

Even before Tuesday, the Obama administration said it was waiting until after the midterm elections to deal with immigration reform so that any losses would not be blamed on the Democrats’ proposal. For some, removing the apprehension statistics – which both parties could use to criticize U.S. immigration laws – was another flatly political move.

“It worries me that they may have been taken down for purely political reasons,” said U.S. Rep. Jason Chaffetz, R-Utah. “If the information is ready it should be made available. The idea that it was and then yanked down for political reasons is outrageous.”

But Customs and Border Protection spokesman Christopher O’Neil said in an email that the decision to remove the briefly released data had nothing to do with the midterm elections, but instead was an effort to provide all of the agency’s statistics, and not just the Border Patrol’s, “in one concise and comprehensive package.”

He said the agency had intended to publish the data by Oct. 31. But administrative delays in gathering statistics by operational elements caused the date to be delayed several days. Customs and Border Protection now plans to publish before Nov. 15, he wrote. He blamed the early release on a miscommunication.

“Someone got ahead of us, and then, someone else gave them to a reporter (without) coordinating with us,” he wrote, adding that in past years, the agency didn’t release statistics until well after January for the previous fiscal year. “No conspiracy, no politics, just good governance.”

Victor M. Manjarrez Jr., a retired Border Patrol chief in Tucson, Arizona, said the numbers can be interpreted — and exploited — different ways, depending on the political party.

He recalled feeling mounting pressure to reduce the number of apprehensions in Tucson – by half – before he retired four years ago, amid efforts to push comprehensive immigration reform. Many Border Patrol chiefs, he said, continue to feel “an incredible amount of pressure.”

Holding off on posting the data “is about the midterm elections,” said Manjarrez, now associate director of the National Center for Border Security and Immigration at the University of Texas, El Paso. “The fear is timing. If this was next year, it wouldn’t be a big deal.”

Since the 2014 fiscal year ended Sept. 30, bits and pieces of the annual statistics have dribbled out. The data show mixed results for the Obama administration, which has touted that its border apprehensions, largely from Mexico, remain near the lowest level in decades.

Department of Homeland Security Secretary Jeh Johnson spoke about the number of Southwest border apprehensions in a speech he gave at a Washington think tank on the state of border security shortly after the 2014 fiscal year ended.

Using slides to illustrate his remarks at the Center for Strategic and International Studies on Oct. 9, Johnson announced that the Border Patrol had made 479,377 apprehensions last year on the Southwest border. He saluted Customs and Border Protection for recently making public an internal report and new policy on the agency’s use of force. And he underscored “a commitment to transparency.”

“There is much more we can do to inform the public about our border security efforts on their behalf,” Johnson said as he concluded his talk.

But the new annual statistics were pulled off the Customs and Border Protection website within hours of being posted the following day.

The agency has kept posted data relating to the surge of unaccompanied minors from Central America caught at the border, which was a driving factor in the spike in so-called Other than Mexican apprehensions in 2014.

But the full data set, obtained by The Center for Investigative Reporting, shows a mixed bag.

Apprehensions at the Southwest border have increased for the past three straight years. Yet border deaths fell to the lowest amount since 1999. A majority of migrants – 252,600, or about 53 percent  – caught at the Southwest border in 2014 were not Mexican. In contrast, a decade ago, Mexicans accounted for 93 percent of apprehensions, according to government statistics.

Also, after about a decade of steady growth, the number of Border Patrol agents assigned to the Southwest border dropped for the first time since the 2004 fiscal year. The agency’s budget was at an all-time high of $3.6 billion.

Chaffetz, who chairs a House Oversight and Government Reform Subcommittee on National Security, criticized the Obama administration for repeatedly withholding statistics from Congress. He said if such information is ready it should be made publicly available.

“Immigration is a hot topic and it needs to be dealt with – both sides agree with that,” he said in an interview. “If we have information that gives a snapshot, I’d rather see that sooner than later.”

This story was edited by Amy Pyle and copy edited by Sheela Kamath.
Andrew Becker can be reached at abecker@cironline.org.

By Andrew Becker Reveal from The Center for Investigative Reporting November 6, 2014