California taxpayers spend about $40 billion a year to pay their fire chiefs, mayors, tree trimmers and thousands of other city and county employees. Some – including harbor pilots in Los Angeles – make more than $300,000 a year. Others receive as little as $190, the payout for one planning commissioner in tiny Alpine County.

Although the salaries of government employees are public, most taxpayers know little about whether these paychecks, which typically represent more than a third of communities’ spending, are fair.

No statewide standards govern how local pay is set, leaving the public in the dark about whether their city managers, for example, are paid appropriately for the job and the community.

With that in mind, The Center for Investigative Reporting analyzed four years of data – from California’s 482 incorporated cities and 58 counties – to see what factors correlated with top officials’ compensation. Most of the time, the larger a community and the higher its median rent, the more money its leaders tended to make.

Stay Up to Date

Sign up for our email newsletters and you’ll never miss out on the stories that matter to you.

But CIR’s analysis, based on data that cities and counties report to the state controller, also found that top officials in a few communities bucked the trend, earning significantly more than their counterparts in similar places.

Butte and Yolo counties are about 90 miles apart in the Sacramento Valley and similar in size and living costs. In 2012, then-Butte Sheriff-Coroner Jerry Smith earned about $183,000 – about the same as his counterparts in similar counties. But Yolo Sheriff-Coroner Ed Prieto made almost 40 percent more ­– about $256,000.

The difference is largely explained by money Prieto received in lieu of retirement pay. Prieto, a retired California Highway Patrol captain, chose not to participate in Yolo’s retirement system, so he receives extra pay equivalent to what the county would otherwise contribute to his pension, said Assistant County Administrator Mindi Nunes.

The analysis also showed that pay can spike significantly when officials leave office.

After Greg Johnson was forced to resign as city manager of Indian Wells, he became California’s highest-paid municipal employee for 2011. His severance package included a year’s salary and benefits and about $65,000 in unused vacation, administrative and sick leave. Johnson, whose desert resort town had about 5,000 residents and 39 people on its payroll, took in more than $677,000 that year, compared with his regular annual salary of nearly $255,000.

“I have to say, in hindsight, it’s a very bad contract. Something none of us will let happen again,” City Councilwoman Mary Roche said of the City Council’s approval of the severance package, according to a news report at the time.

Wade McKinney, the current city manager, can bank far fewer leave hours under his contract than his predecessor could. If he were fired, his severance package would include nine months’ salary and benefits instead of a year’s.

It’s like an insurance policy for what can be a vulnerable position, said R. Craig Scott, an Orange County attorney who negotiates contracts for executives in the public and private sectors.

“They can, on any night the city council meets, find themselves unemployed,” he said. “By a 3-to-2 vote – they’re gone.”

In addition to promising severance pay, city manager contracts historically have not capped how much vacation time can be accrued, Scott said. That’s led to hefty payouts for some outgoing city managers.

Some cities have capped leave accrual and shrunk severance packages since 2010, Scott said, after officials in the small Southern California city of Bell became embroiled in a public corruption scandal. Bell, where the former city manager earned more than $1 million a year, became a symbol of local government excess, prompting the League of California Cities to recommend compensation guidelines for city managers.

The guidelines call for establishing benchmark agencies, nearby communities that are similar in services provided, population served and the number of employees. The International City/County Management Association offers similar guidelines for government managers.

Other factors – such as a city’s political stability and the scope of an official’s responsibility – are “very hard to reduce to data points,” said Chris McKenzie, executive director of the League of California Cities.

Local governments don’t use uniform metrics for setting compensation, said Norman Roberts, a consultant whose Beverly Hills firm recruits public-sector executives. “You just kind of roll your eyeballs in the back of your head because there’s no rhyme or reason in half the places.”

Even when cities and counties try to establish fair compensation by benchmarking pay to outside factors, some employers and employees can cherry-pick data to get their desired paychecks.

San Bernardino is the only city in California where public safety compensation is not set by collective bargaining. Instead, police and fire department salaries are based on the average pay for comparable jobs in similarly sized cities. 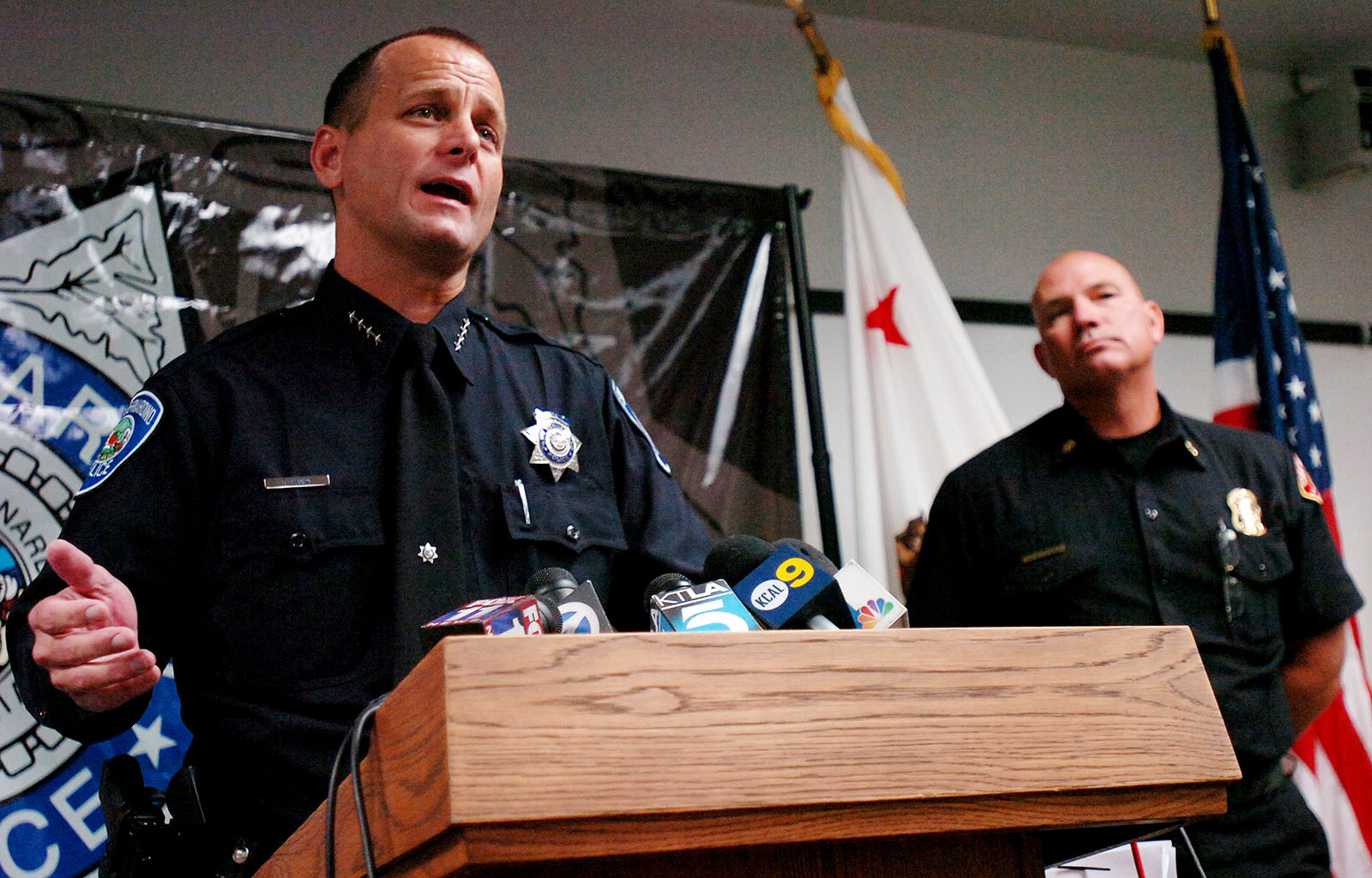 How those cities are chosen is like a sports draft in reverse: Labor and management take turns striking cities from a list until only 10 remain. The initial pool of cities is based on only one factor: population.

The unique approach means that police pay this fiscal year is pegged to cities whose median rent is 14 to 102 percent higher than San Bernardino’s.

In November, local voters rejected a ballot measure to replace the benchmarking process with collective bargaining. The city, which recently entered its third year of bankruptcy, calculates that police employee salaries will grow by about 4 percent this year.

The measure would not have fixed all of San Bernardino’s financial woes, but it would have freed the city from “a financial straightjacket,” said Thomas Pierce, an economics professor at California State University, San Bernardino who served on the city’s charter review committee that recommended the proposition.

Up north in Contra Costa County, elected officials in October chose a pay benchmark that boosted their salaries by 33 percent – to more than $129,000.

The Board of Supervisors – whose members already earned about what could be expected based on Contra Costa’s size and cost of living – voted to set their salaries at 70 percent of a superior court judge’s pay. They chose the formula, which is similar to ones used by several counties in the state, after surveying how other San Francisco Bay Area counties paid their supervisors.

“Nobody wants to be at the bottom. You’re always trying to be in the middle,” said Supervisor Candace Andersen, who cast the board’s only dissenting vote. “You escalate just because everyone else has set theirs at the median.”

However, when county employees tried to use some of the same Bay Area counties to negotiate higher pay, county officials said those counties’ larger budgets made them inappropriate comparisons. 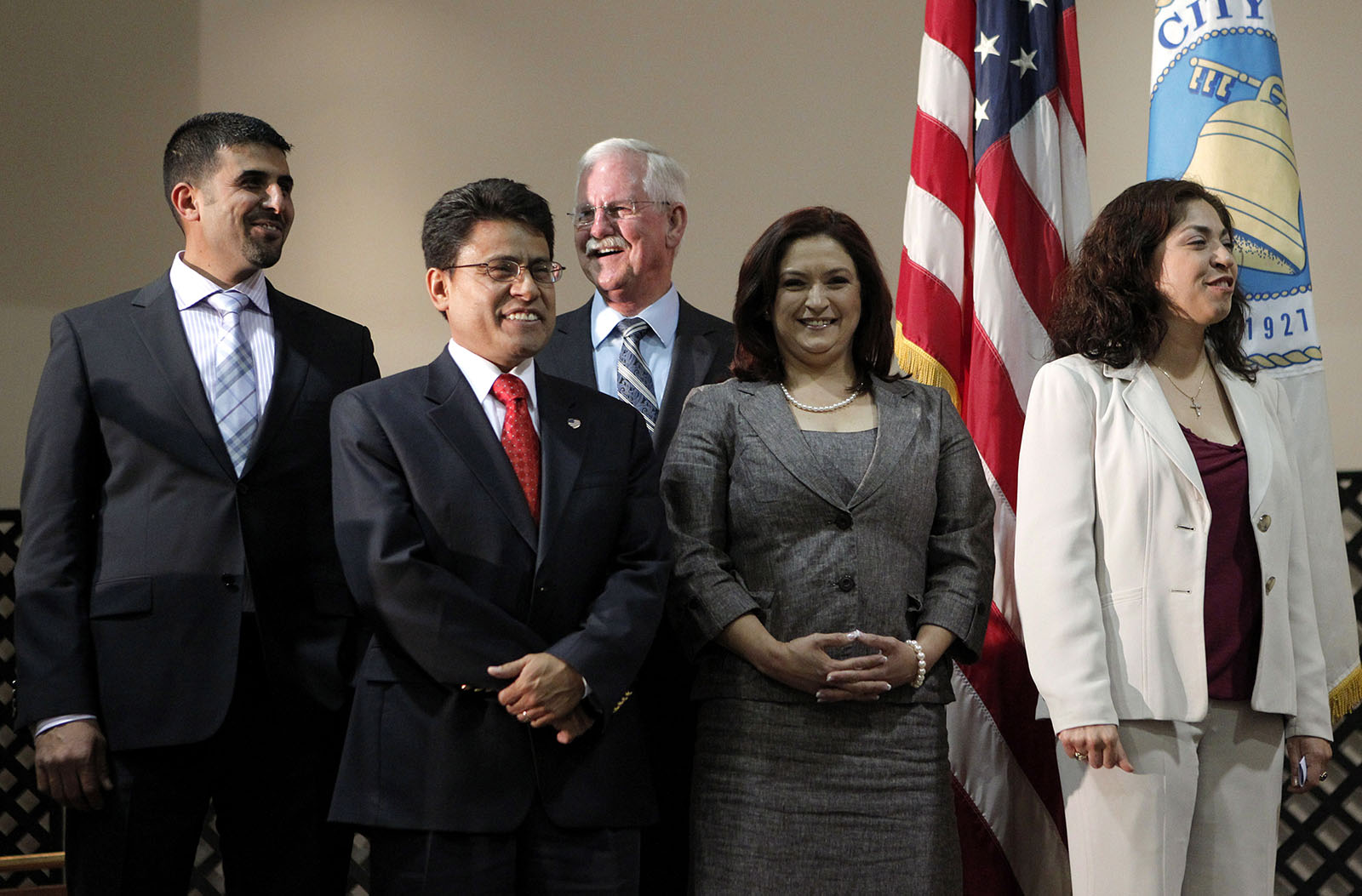 Nestor Enrique Valencia (second from left) and other new members of the Bell, Calif., City Council are sworn in in 2011. Valencia is now the mayor.

“For employees, I hate to say it, but it was a slap in the face to them,” said Andersen, who is taking the 4 percent raise that other county employees received instead of the 33 percent bump for supervisors.

Surveying salaries in other communities ratchets up pay over time, as local governments try to stay competitive, said Nestor Enrique Valencia, the current mayor of Bell. That puts some communities at a disadvantage, he said.

To even the playing field, state law should cap the amount of vacation and sick time that public employees can cash out, Valencia said. Bell limits payouts for unused vacation time to 360 hours and sick time to between 100 and 1,500 hours, depending on the type of employee.

His city now suffers, he said, for getting out in front of the issue.

“Who’s going to come work for the city of Bell,” he said, “when they know they could get these other benefits elsewhere?”

CIR reporters Jennifer Gollan and Emmanuel Martinez contributed to this story. It was edited by Jennifer LaFleur and copy edited by Stephanie Rice and Nikki Frick.

Want more in-depth investigations? Sign up for our newsletters to get stories like this delivered straight to your inbox.

By Joanna Lin Reveal from The Center for Investigative Reporting December 4, 2014