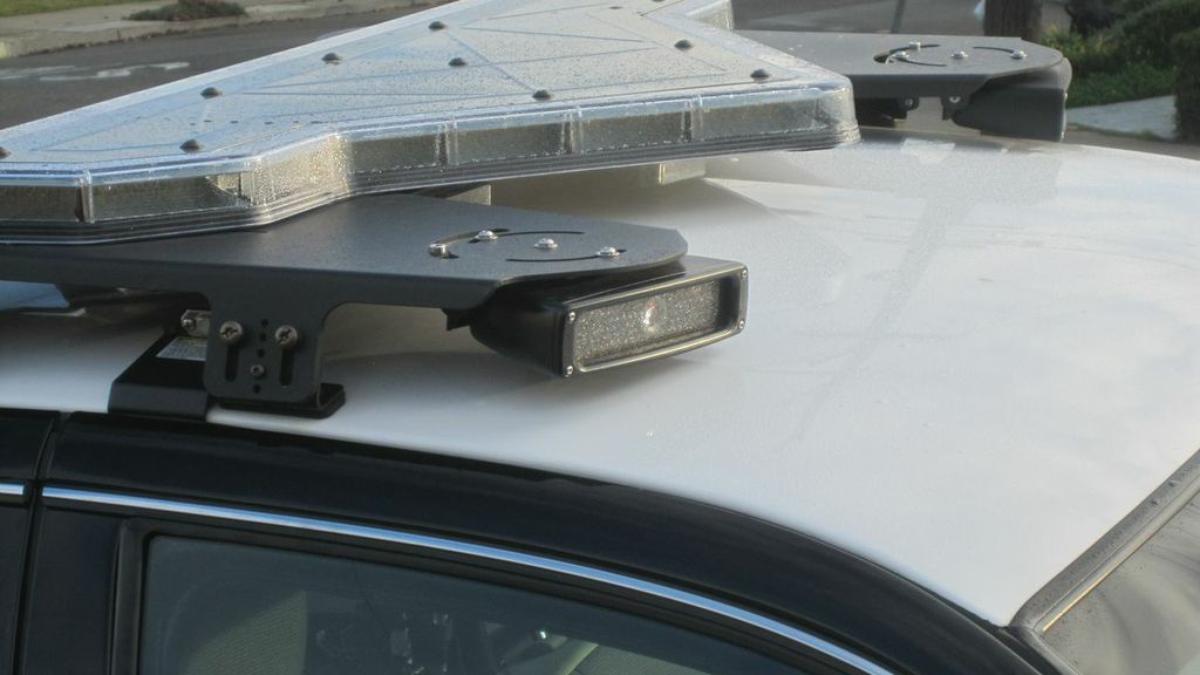 A license-plate reader mounted on a San Leandro Police Department car can log thousands of plates in an eight-hour patrol shift. “It works 100 times better than driving around looking for license plates with our eyes,” says police Lt. Randall Brandt.

When the city of San Leandro, Calif., purchased a license-plate reader for its police department in 2008, computer security consultant Michael Katz-Lacabe asked the city for a record of every time the scanners had photographed his car.

The results shocked him.

The paperback-size device, installed on the outside of police cars, can log thousands of license plates in an eight-hour patrol shift. Katz-Lacabe said it had photographed his two cars on 112 occasions, including one image from 2009 that shows him and his daughters stepping out of his Toyota Prius in their driveway.

That photograph, Katz-Lacabe said, made him “frightened and concerned about the magnitude of police surveillance and data collection.” The single patrol car in San Leandro equipped with a plate reader had logged his car once a week on average, photographing his license plate and documenting the time and location.

With heightened concern over secret intelligence operations at the National Security Agency, the localized effort to track drivers highlights the extent to which the government has committed to collecting large amounts of data on people who have done nothing wrong.

A year ago, the Northern California Regional Intelligence Center – one of dozens of law enforcement intelligence-sharing centers set up after the terrorist attacks of Sept. 11, 2001 – signed a $340,000 agreement with the Silicon Valley firm Palantir to construct a database of license-plate records flowing in from police using the devices across 14 counties, documents and interviews show.

The extent of the center’s data collection has never been revealed. Neither has the involvement of Palantir, a Silicon Valley firm with extensive ties to the Pentagon and intelligence agencies. The CIA’s venture capital fund, In-Q-Tel, has invested $2 million in the firm.

The jurisdictions supplying license-plate data to the intelligence center stretch from Monterey County to the Oregon border. According to contract documents, the database will be capable of handling at least 100 million records and be accessible to local and state law enforcement across the region.

Law enforcement agencies throughout Northern California will be able to access the data, as will state and federal authorities.

In the Bay Area, at least 32 government agencies use license-plate readers. The city of Piedmont decided to install them along the border with Oakland, and the Marin County enclave of Tiburon placed plate scanners and cameras on two roads leading into and out of town.

Law enforcement agencies throughout the region also have adopted the technology. Police in Daly City, Milpitas and San Francisco have signed agreements to provide data from plate readers to the Northern California Regional Intelligence Center. A Piedmont document indicates that city is also participating, along with Oakland, Walnut Creek, Alameda and the California Highway Patrol.

Katz-Lacabe, who was featured in a Wall Street Journal story last year, said he believes the records of his movements are too revealing for someone who has done nothing wrong. With the technology, he said, “you can tell who your friends are, who you hang out with, where you go to church, whether you’ve been to a political meeting.”

Lt. Randall Brandt of the San Leandro police said, “It’s new technology, we’re learning as we go, but it works 100 times better than driving around looking for license plates with our eyes.”

The intelligence center database will store license-plate records for up to two years, regardless of data retention limits set by local police departments.

In California, Long Beach police detectives used scanner data to arrest five people in a 2010 homicide. Plate readers in Tiburon identified celebrity chef Guy Fieri’s yellow Lamborghini in March 2011, which allegedly had been stolen from a San Francisco dealership by a teenager who embarked on a crime spree two years ago and now faces attempted murder charges.

Sid Heal, a retired commander with the Los Angeles County Sheriff’s Department, oversaw the adoption of plate readers in his agency in the mid-2000s. Heal recalled the dramatic uptick the plate readers made in the auto theft unit’s productivity.

“We found 10 stolen vehicles on the first weekend in 2005 with our antitheft teams,” Heal said. “I had a hit within 45 minutes.”

Before, Heal said, police had to call license plates in to a dispatcher and wait to have the car verified as stolen. Plate readers, Heal said, “are lightning fast in comparison” and allow officers to run up to 1,200 plates an hour, as opposed to 20 to 50 plates per day previously.

But Jennifer Lynch, a staff attorney at the Electronic Frontier Foundation, said the Northern California database raises significant privacy concerns. “Because so many people in the Bay Area are mobile, it makes it that much more possible to track people from county to county,” Lynch said.

In May, the Electronic Frontier Foundation, along with the American Civil Liberties Union of Southern California, sued the Los Angeles County Sheriff’s and Los Angeles Police departments for a week of data gathered and retained in a multiagency network. For now, it’s unknown which agency administers the Los Angeles database, how many agencies contribute or have access to the database, how many records the system retains or how long they are kept.

In San Diego, 13 federal and local law enforcement agencies have compiled more than 36 million license-plate scans in a regional database since 2010 with the help of federal homeland security grants. The San Diego Association of Governments maintains the database. Like the Northern California database, the San Diego system retains the data for between one and two years.

“License-plate data is clearly identifiable to specific individuals,” said Lee Tien, a senior staff attorney at the Electronic Frontier Foundation. “This is like having your barcode tracked.”

License-plate readers are not subject to the same legal restrictions as GPS devices that can be used to track an individual's movements. The U.S. Supreme Court ruled unanimously last year that lengthy GPS tracking constitutes a Fourth Amendment search and may require a warrant.

But plate readers might not fall under such rulings if police successfully argue that motorists have no “reasonable expectation of privacy” while driving on public roads.

Then-California state Sen. Joe Simitian, D-Palo Alto, introduced a bill last year that would have required California police to purge license-plate data after 60 days and applied that rule to companies that collect such data. Law enforcement and private businesses involved in the technology resisted, and the bill died.

“Do we really want to maintain a database that tracks personal movements of law-abiding citizens in perpetuity? That’s the fundamental question here,” said Simitian, now a Santa Clara County supervisor. “Larger and larger amounts of data collected over longer periods of time provide a very detailed look at the personal movements of private citizens.”

While some law enforcement agencies, like the California Highway Patrol, have their own data retention guidelines for license-plate scanners, Simitian said there still is no larger policy that protects the privacy of Californians on the road.

“Public safety and privacy protection are not mutually exclusive,” he said. “There's a balance to be struck, and most people understand that.”

“A lot of the guidance on this technology – the court doctrine – is nonexistent,” Heal said. “Until that guidance comes, law enforcement is in an exploratory mode.”

Correction: An earlier version of this story misstated how long the San Diego Association of Governments retains license-plate information.

By Ali Winston Reveal from The Center for Investigative Reporting June 26, 2013