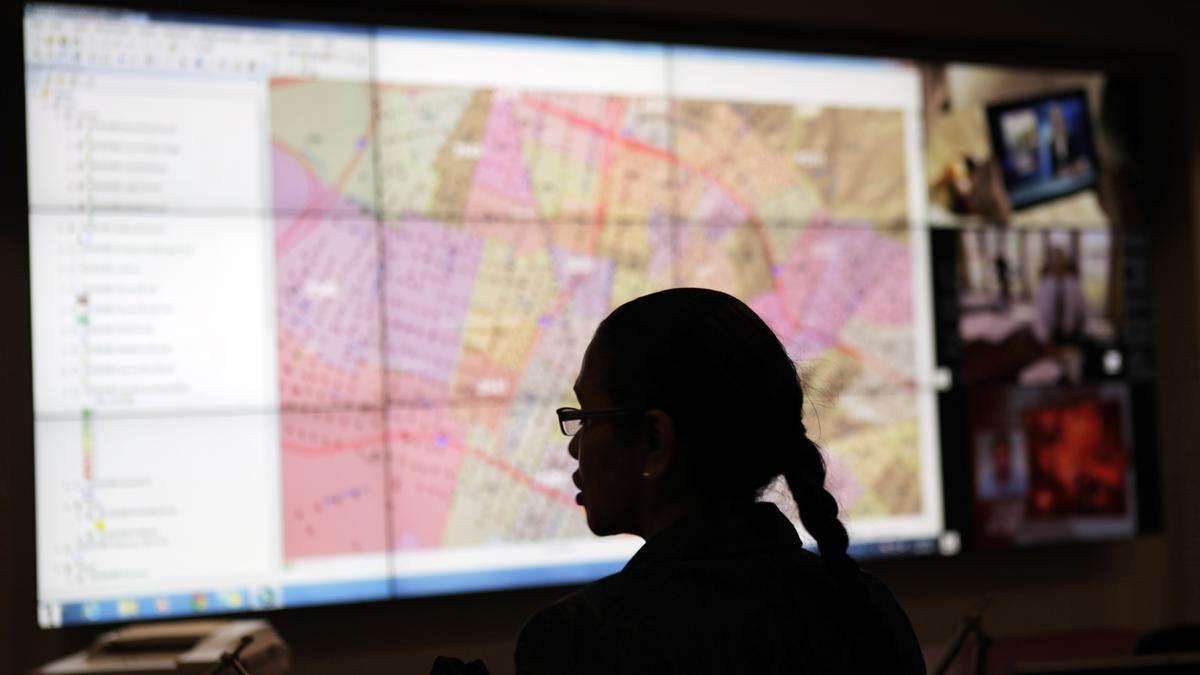 Renee Domingo, Oakland's director of emergency services, stands in front of the main monitoring screen at the Domain Awareness Center. Officials expect to unveil the surveillance center in mid-2014.

The Domain Awareness Center, a joint project between the Port of Oakland and city, started as a nationwide initiative to secure ports by networking sensors and cameras in and around the facilities. The busy port is one of seven U.S. maritime facilities that the Department of Homeland Security considers at highest risk of a terrorist attack.

Since its inception in 2009, the project has ballooned into a surveillance program for the entire city. Some officials already have proposed linking the center to a regional Department of Homeland Security intelligence-gathering operation or adding feeds from surveillance cameras around the Oakland stadium and arena complex.

On Tuesday evening, the Oakland City Council was expected to approve an additional $2 million in federal grants to fund the build-out of the surveillance center at Oakland's Emergency Operations Center on Martin Luther King Jr. Way. But following an outcry from public speakers about the center’s lack of privacy guidelines or data retention limits, the council pulled the item from the consent calendar and postponed a vote until July 30.

Councilwoman Desley Brooks criticized the decision to place the funding on the consent calendar, which normally is reserved for routine matters. “Consent items are supposed to be noncontroversial,” Brooks said. “Clearly, it is very controversial.”

Joshua Daniels, one of the speakers during the meeting, said the surveillance center would give a great deal of power to the Oakland Police Department, which he said “doesn't respect the rights” of Oakland residents.

“This city has a huge trust issue,” Daniels said, “and it's not going to be solved by spying on your citizens.”

Approval of the $2 million grant would fund the incorporation into the Domain Awareness Center of sensors and cameras from outside agencies such as the state Department of Transportation, the Metropolitan Transportation Commission, the Oakland Unified School District, the O.co Coliseum and Oracle Arena, as well as regional law enforcement intelligence centers.

The expansion of Oakland’s surveillance facilities comes after months of Occupy Oakland unrest and recent protests over the acquittal of George Zimmerman in the Trayvon Martin shooting in Florida. And it comes amid a fierce debate about government and corporate surveillance on private activities and the massive accumulation of data about ordinary activities.

The Oakland Domain Awareness Center currently does not have privacy guidelines or limits for retaining the data it collects, raising concerns from civil libertarians and privacy advocates.  Eighteen license-plate readers mounted on Oakland police vehicles and city infrastructure already collect and retain millions of license-plate records.

Linda Lye, an attorney with the American Civil Liberties Union of Northern California who led protests against the Alameda County sheriff’s proposed purchase of an aerial drone this year, called the Oakland surveillance center “a classic illustration of mission creep.”

“What are the limits on dissemination?” Lye asked. “And what are the privacy and safety protocols for handling this information internally and through outside agencies?”

Ahsan Baig, Oakland's information technology manager, said guidelines on privacy and data retention would be developed during the next year. Because the surveillance center will draw on different types of sensors and cameras, Baig said drafting such policies would be a complex process.

Lee Tien, a senior staff attorney with the nonprofit Electronic Frontier Foundation, said the level of unrest Oakland has experienced in recent years made the issue an easy sell to city. But Tien said he is concerned that the center lacks guidelines about data use or retention.

“There's no indication they've considered any privacy or civil liberties issue in the first place,” Tien said. He noted Oakland's center is explicitly oriented toward the city, unlike the center at the Port of Long Beach in Southern California, which he said has a maritime focus.

When Oakland’s project first began, it was focused on the port. But Renee Domingo, the city’s director of emergency services, said the city’s public safety challenges and the sprawling nature of the port – which also operates Oakland International Airport – prompted officials to design an “all-hazards system” capable of aiding responses to crime, terrorism, earthquakes and other disasters.

Officials expect to unveil the center in mid-2014. A sergeant and an analyst from the Oakland Police Department, as well as someone from the Port of Oakland, will work at the facility. The city and port are applying for another federal grant of $2.6 million to fund these positions.

As planned, the center would integrate computer dispatch systems for the Oakland police and fire departments, gunshot detection microphones and license-plate readers. It includes use of crime mapping software and stationary video cameras, private alarm detection programs, Twitter feeds, news feeds and other alerts for increased “situational awareness” and “more effective incident response,” according to Baig, who briefed the City Council’s Public Safety Committee this month.

Key to the operation is a geographic information system map with overlaid points that represent cameras, license-plate readers, sensors and other infrastructure that feeds into the central network. Multiple camera feeds, sensor indicators and maps can be viewed simultaneously on-screen alongside alerts from other government agencies. Alarms, crime reports and trends in offenses are accessible through a “Crime View” portal.

For the fire department, the system would greatly expand its view of a crisis situation. Battalion Chief Darin White pointed to a fiery tanker crash on Interstate 880 in 2008 that spilled a thousand gallons of fuel and prompted a massive emergency response. In such situations, White said the surveillance center “will be able to see and have real-time situational awareness as they're responding to an incident.”

Former New York and Los Angeles Police Chief William Bratton suggested that the Oakland Police Department make use of the port surveillance project in his May report on improving the department’s investigations. The report recommended that the department “significantly increase” its surveillance cameras in commercial areas “to provide identifications and evidence in robbery, burglary and some shooting cases. Cameras would be monitored and recorded at the Domain Awareness Center that is currently under construction.”

Even before the Domain Awareness Center is open, some officials are talking about expanding its scope.

At the recent Public Safety Committee meeting, Domingo said Coliseum complex officials are willing to integrate into the system the 135 surveillance cameras around the stadium and arena.

The item the Oakland City Council postponed until July 30 would have approved a contract for Science Applications International Corp. – a Virginia-based company that builds large-scale surveillance systems, drones and computer networks for the private and public sectors – to construct the new center. The company also would have received a waiver to the company from competitive bidding rules, because it won the contract for the surveillance center's design phase.

Mary Madden, an activist with Alameda County Against Drones, highlighted the proposed extent of the surveillance center's reach. “This would integrate city and port surveillance with private surveillance, as well as the CCTV (closed-circuit television) feeds monitoring children in Oakland schools,” she said. “How this will help protect the port, I have no idea.”

Long Beach is the site of the only other Domain Awareness Center in California, where a $21 million surveillance center monitors port facilities, surrounding waterways and rail and road infrastructure. Los Angeles and Seattle are building their own domain awareness centers for local ports with federal funding. New York and Chicago also have networked surveillance centers led by local police departments.

The Southern California fusion center and local law enforcement have access to the Port of Long Beach system, which also makes use of cameras, alarms and sensors from port facilities. Eighty-seven private and public entities participate in the system, according to Cosmo Perrone, the port’s former security director.

Perrone said the Long Beach system is oriented toward the water and facilities surrounding the port rather than the entire city. But he emphasized that each port facility has its own unique geography and security concerns.

“Each port is so different in the way they operate,” Perrone said. “It's very hard to make comparisons between ports.”

This story was edited by Robert Salladay and copy edited by Nikki Frick and Christine Lee.

By Ali Winston Reveal from The Center for Investigative Reporting July 18, 2013