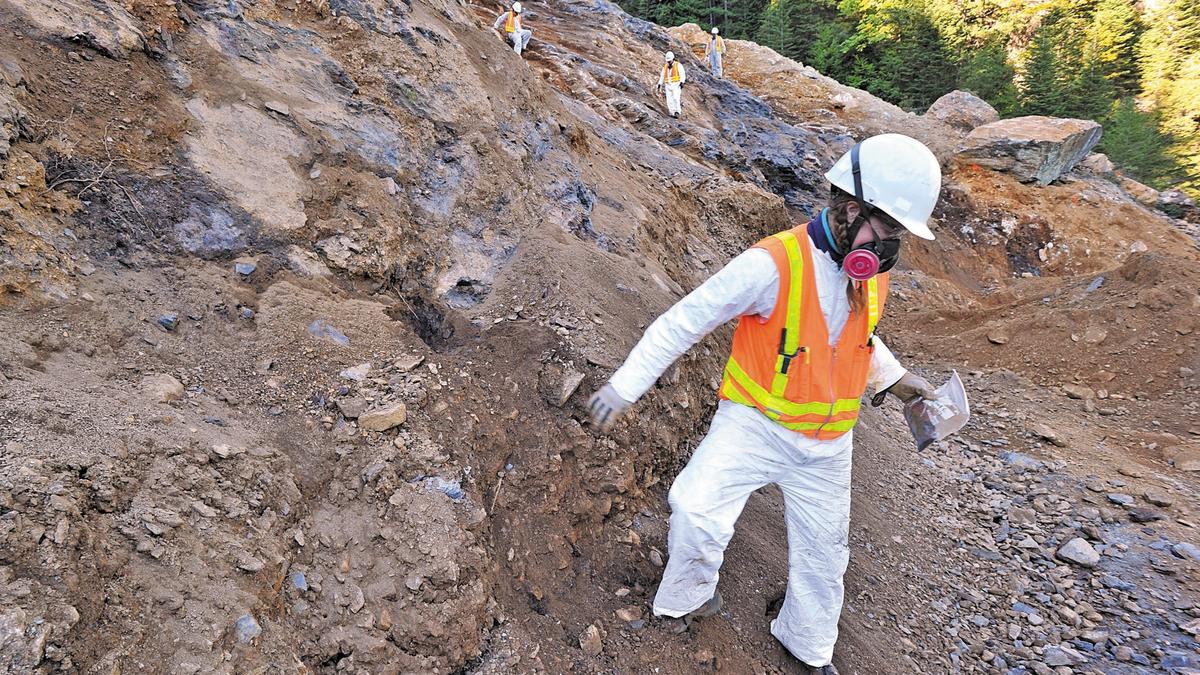 Joell Stine of Southern Oregon University takes soil samples at the Blue Ledge Mine, a Superfund site near the California-Oregon border, in 2010.

The worst of America’s toxic abandoned mines get federal Superfund money for cleanup. The rest – and liability for their pollution – are left to states, private organizations and nonprofit conservation groups to clean up.

Hundreds of thousands of abandoned mines litter the West: gold, silver, lead, copper. Some are left from the California gold rush; some were abandoned just a few decades ago.

Today, acidic water and heavy metals from mines slowly leach into groundwater, lakes and streams. Corrosive water destroys aquatic ecosystems. Fish – the ones that don’t die – become loaded with arsenic or mercury. People swim in contaminated lakes. They hike over contaminated soil, breathing in dust laced with lead and arsenic. There are about 500,000 abandoned mines in the U.S., contaminating tens of thousands of miles of waterways.

To say the least, America has a problem with abandoned mines.

The worst of the worst get federal Superfund money for cleanup. The rest are left to the states, private organizations and nonprofit conservation groups to clean up.

They’re also left with the liability. Under the Clean Water Act, anyone altering a water source needs to have a permit. And getting that permit requires assuming responsibility for water pollution. In many cases, if a nonprofit decides to clean up waste at an abandoned mine, it also could be on the hook for the water quality of the entire watershed – a prohibitively expensive task.

So the waste site sits untouched, and acid continues to drain into nearby water.

U.S. Sen. Mark Udall, D-Colo., has sought without success to remedy this for more than a decade. Udall and others have tried during every Congress since 2002 to pass legislation to relieve some of that liability. His current good Samaritan bill, as with every previous one, was exiled to committee to wait out the end of the session.

The proposals have failed for various reasons. Mostly, according to Steve Moyer of the water conservation group Trout Unlimited, it’s that no one really cares.

“It’s not a burning priority on anybody’s agenda,” he said.

But for locals living near abandoned mines, it is a priority. In the Sierra Nevada, which provides 60 percent of California’s water, mercury from the days of the gold rush contaminates waterways flowing into the Sacramento River. In Montana, an abandoned copper pit mine is filled with water so toxic that birds that land on it die. In some Southern California desert towns, wind blows arsenic-contaminated dust from abandoned mines into residents’ backyards. In Patagonia, Arizona, toxic orange sludge has drained from two abandoned mines into waterways that feed into Patagonia Lake, a state park. Residents eat fish from that lake, and cattle graze near the source of the runoff.

“There's the potential of these heavy metals getting into our food supply,” said Wendy Russell, a coordinator for the Patagonia Area Resource Alliance. “Even if you don't live near these abandoned mines, you can certainly suffer the consequences.”

But another stumbling block to a good Samaritan law is environmentalists, who fear any attempt to change the Clean Water Act would open the door for relaxing other parts of the act. That’s essentially what the good Samaritan legislation does – relax the rules. And that’s got some people scared.

In many cases, what happens when a group tries to clean up contaminated water is that it’ll install a sort of treatment system downstream from where contamination flows in. The system filters the toxic water and releases water that’s, say, 90 percent cleaner. But under the Clean Water Act, the cleanup group is considered responsible for the 10 percent of contamination that’s left. That puts the group at legal risk – it could be considered a polluter under the law.

“There has always been a split in the environmental community because some folks feel like we shouldn’t be giving liability waivers to anyone,” said Lauren Pagel, policy director at Earthworks, a conservation group focusing on mineral and energy development. “Once you go in and start tinkering with the Clean Water Act – it just makes us a little nervous.”

They just don’t want to open the door.

Pagel referred to a 2006 abandoned mine cleanup bill brought by then-Sen. Ken Salazar, D-Colo., who later served as secretary of the interior from 2009 to 2013. His bill included waivers not just to the Clean Water Act, but also to the Toxic Substances Control Act and Solid Waste Disposal Act.

“There’s always been a fear that even if the bill started out as something very limited, through the legislative process, there’s a chance to morph into something similar to the Salazar bill,” Pagel said.

Udall’s most recent bill creates a special permit for good Samaritan mine cleanups. It says that as long as you “significantly” improve the water quality – even if it’s not as good as mandated by the Clean Water Act – you’re protected.

In 2012, the Environmental Protection Agency issued a memo to clarify protections for cleanup groups. But Leon Szeptycki, a lawyer at Stanford University specializing in water quality and restoration, said the EPA guidance doesn’t include enough detail.

One of the biggest concerns is how long a group would be on the hook after installing a treatment system, he said. Many good Samaritans are local groups with limited funding.  They may have the money to install a treatment system, but not necessarily to maintain it for decades to come. At what point can the group walk away? Is it liable for poor-quality water if the system breaks down in 10 years?

This uncertainty in the memo leaves organizations hesitant to test the policies. So nothing gets done.

This story was edited Robert Salladay and copy edited by Nikki Frick.
Rachael Bale can be reached at rbale@cironline.org. Follow her on Twitter: @Rachael_Bale.

By Rachael Bale Reveal from The Center for Investigative Reporting November 4, 2014