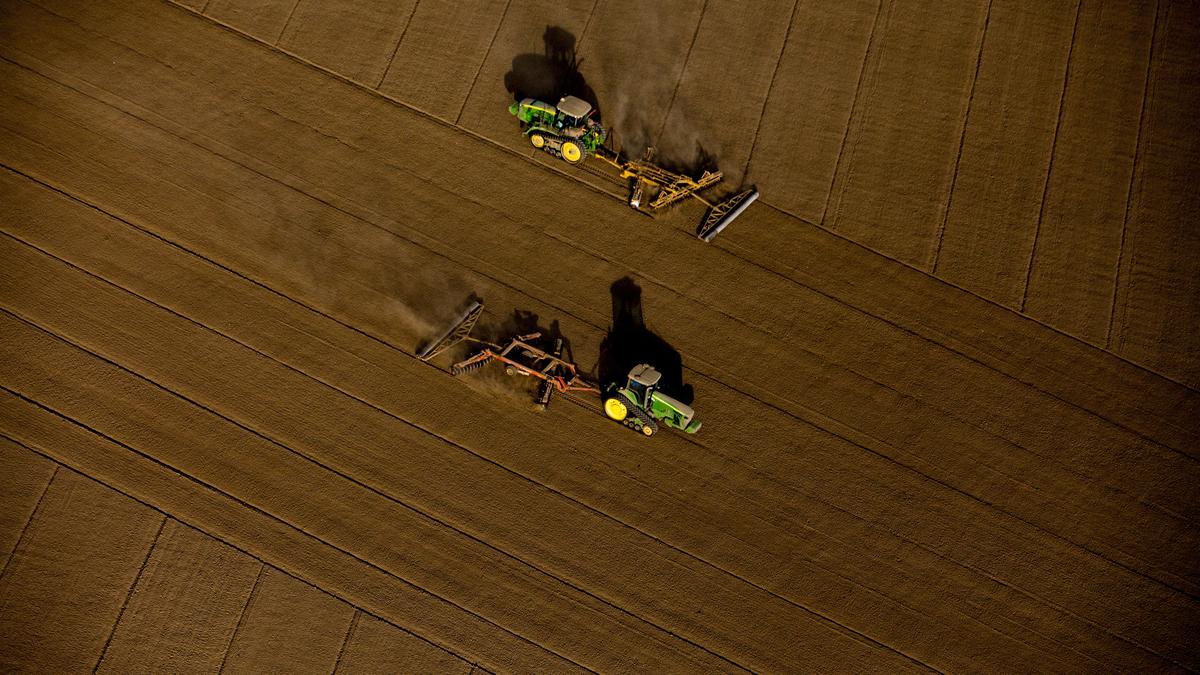 Over the last decade, the use of fumigants, such as chloropicrin, is up 20 percent in California.

California keeps detailed data on every commercial pesticide applied across the state. It provides a unique look at how, where and when chemicals are used. The Center for Investigative Reporting obtained more than two decades’ worth of that data from the state – the equivalent of more than 56 million pesticide applications.

We used the data to build this app that lets you search for pesticide use around your home, workplace or anywhere else in California. And it helped inform our investigation into the pesticides used by the strawberry industry. As we played with the data, we came across some nuggets that didn’t make it into that story.

Here are five of the most interesting things we pulled out of the data:

1. A class of pesticides called neonicotinoids increasingly is being blamed for killing honeybees. Their use has more than doubled in the last 10 years in California. 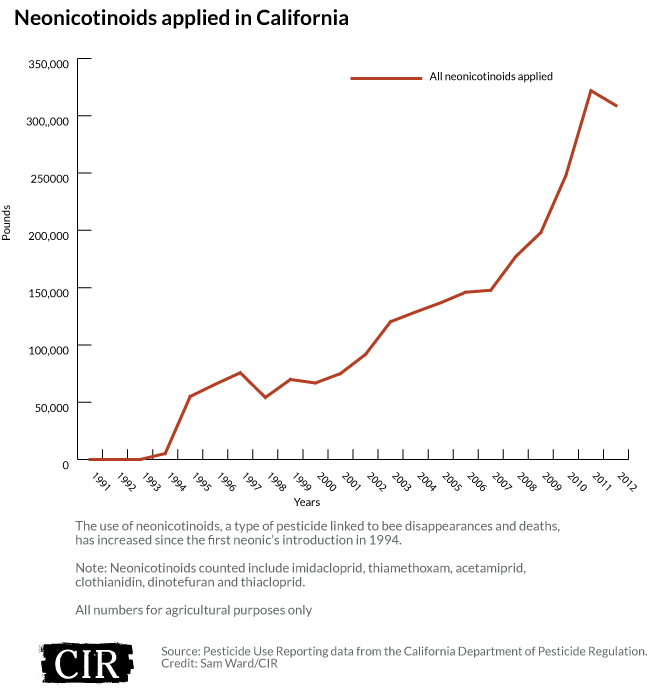 Every year since 2006, beekeepers have noticed mysterious mass die-offs of their bees. Usually, they just vanish, their bodies nowhere to be found.

The consequences of continued disappearances could be stark. Honeybees pollinate more than one-third of the world’s crops, which support dozens of industries. A collapse of the honeybee population would mean a collapse in the commercial production of fruits, vegetables, nuts and seeds. Alfalfa crops would be devastated, drying up a major food source for cows. Bees also pollinate oilseeds like sunflower and coconut, which are the source of half of the world’s fat and oil.

The cause of what’s known as colony collapse disorder is a mystery, but new scientific studies increasingly point to the same culprit: a kind of pesticide called neonicotinoids, or neonics for short.

When the U.S. Environmental Protection Agency approved the first neonic for use in 1994, it was supposed to be less toxic to humans and birds than other pesticides. Neonics are what’s known as systemics, and they’re most effective when applied as a coating to a seed, allowing the chemicals to be absorbed into the plant’s system as it grows.

When an insect eats the leaves, pollinates the plant or drinks the nectar, it ingests the insecticide. The neonic, like nicotine, blocks a particular neurotransmitter. That causes nerves to overexcite and the insect to die.

Aside from being toxic to bees in and of themselves, neonics may complicate other problems. They could trigger a biological response to cold weather, as a 2014 Harvard University study suggests. Or neonics could scramble bees’ sense of direction, as a 2012 study indicates. Or they may make bees more susceptible to disease or poor nutrition, the U.S. Department of Agriculture says.

In California, neonics are most commonly used on grapes, cotton and oranges. Across the rest of the country, they’re also popular for corn and other grains. In the last 10 years, the use of these chemicals on California crops has more than doubled.

In 2013, the European Union banned the three most common neonics – imidacloprid, clothianidin and thiamethoxam – over concerns about their effects on bees. California now is requiring companies to do more tests and submit new data about their chemicals. State scientists will evaluate this information to decide whether the state should take regulatory action.

2. Chlorpyrifos, a pesticide recently linked to autism, is used most heavily in Fresno, Tulare and Kern counties.

A recent University of California, Davis study found that pregnant women living near fields treated with the pesticide chlorpyrifos were three times more likely to have a child with autism. In addition, prenatal exposure to chlorpyrifos has been linked to anomalies in the brain’s surface, causing lower IQs. Early childhood exposure has been linked to developmental delays.

Chlorpyrifos used to be commonly used inside peoples’ homes to control insects, but the EPA banned residential uses in 2001.

CHART: 10 California counties with highest use of chlorpyrifos, including agricultural uses and nonagricultural uses, such as landscaping, mosquito control and, before 2001, residential fumigation

3. The strawberry industry has found a new exemption to get around the international methyl bromide ban.

For decades, farmers who grow crops like strawberries, grapes and carrots pumped methyl bromide into the soil before planting to kill off all kinds of pests. Few chemicals treat such a wide range of pests so effectively.

But it turns out that methyl bromide can escape into the atmosphere and eat holes in the ozone layer. Under an international treaty, the Montreal Protocol, developed countries pledged to phase out the pesticide’s use by 2005.

California’s strawberry industry has used one well-known economic hardship exception to be able to continue using methyl bromide today. Overall, though, methyl bromide use is down, and the United States says it will not seek exemptions for its strawberry growers past 2016. 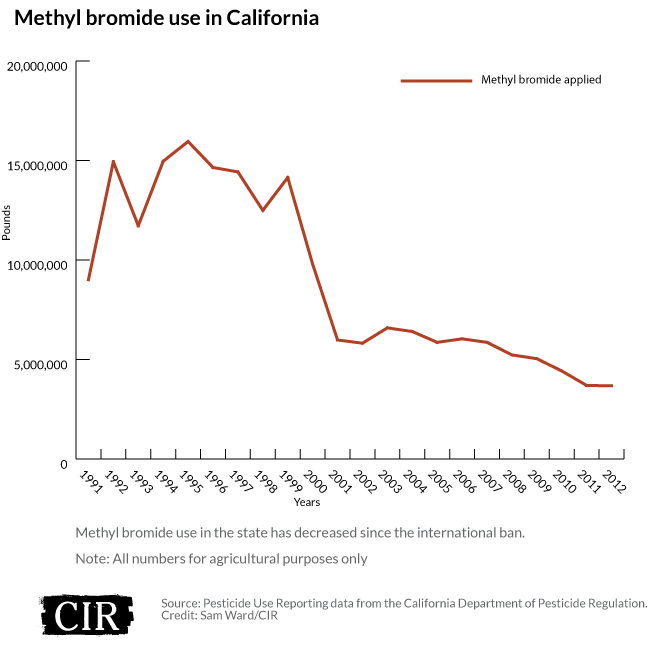 But we found that strawberry growers also tap another lesser-known loophole.

The treaty allows methyl bromide to be used to fumigate fruit, wood and other agricultural products that will be shipped somewhere else. The exemption is commonly used for international shipping. The idea is to avoid moving pests and diseases from one region to another.

But the EPA and strawberry growers have taken on what appears to be a unique interpretation of the exception that’s allowed them to continue using more methyl bromide. Most strawberries get their start as “runners,” or daughter plant offshoots, in the cooler regions of Northern California and then are shipped to be planted in the warmer climates of Central and Southern California. The EPA says that because these plants are shipped from one distinct region to another, they’re eligible for the “quarantine pre-shipment” exemption.

The catch is that growers aren’t necessarily treating the actual plants before they’re shipped: They’re treating the soil before they plant the runners. United Nations literature says there is only one country in the world that counts this kind of use as an exception, but it refused to identify the country by name. Nonetheless, a 2014 report from the U.N. Environment Program singles out the U.S. for its interpretation of the exemption, and the EPA’s own rules say American growers can do this. 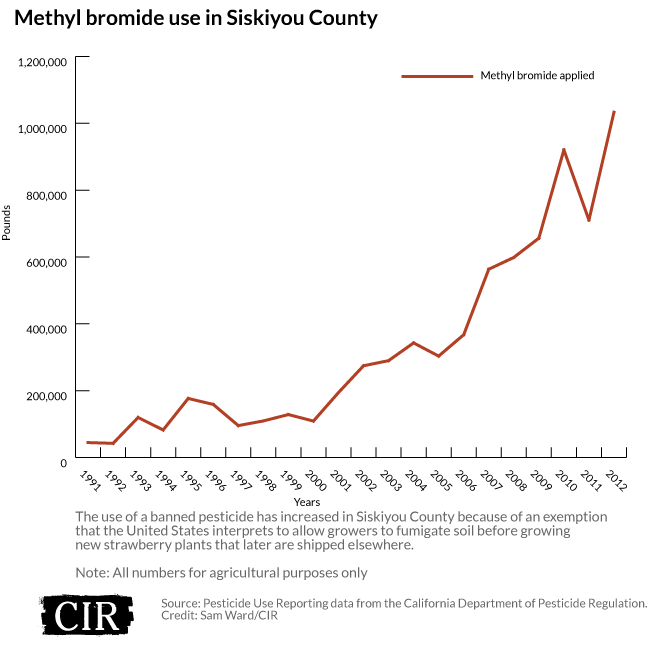 4. Overall pesticide use has almost held even over the last 10 years. But use of fumigants is on the rise. 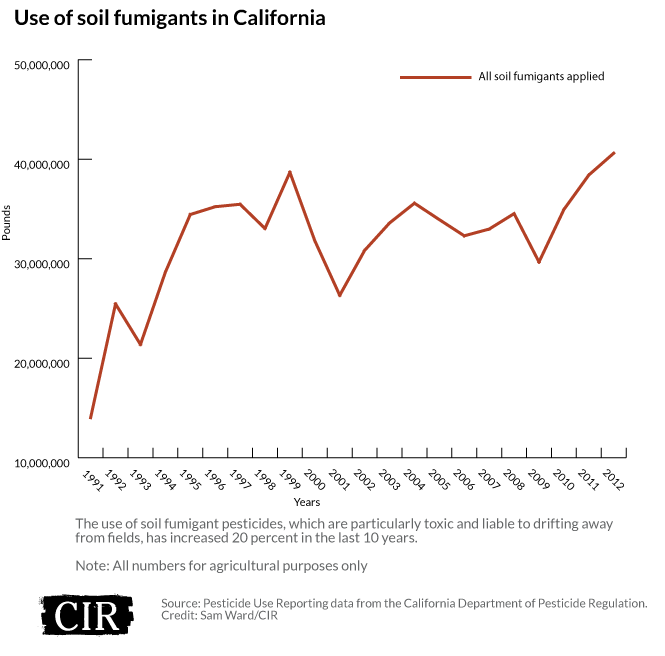 Fumigants are gases that are pumped into the soil and can drift, affecting workers and nearby residents.

When methyl bromide began to be phased out in 1999, fumigant use dropped significantly. However, over the last decade, fumigant use is up 20 percent.

Today, metam sodium and 1,3-Dichloropropene – often known by its abbreviated name, 1,3-D, or its brand name, Telone – are two of the most heavily used pesticides in California. Metam sodium can cause respiratory problems and the state considers 1,3-D to be a carcinogen.

A third popular fumigant, chloropicrin, was used in tear gas during World War I. If breathed in, its effects range from chest tightness to severe breathing problems and death. 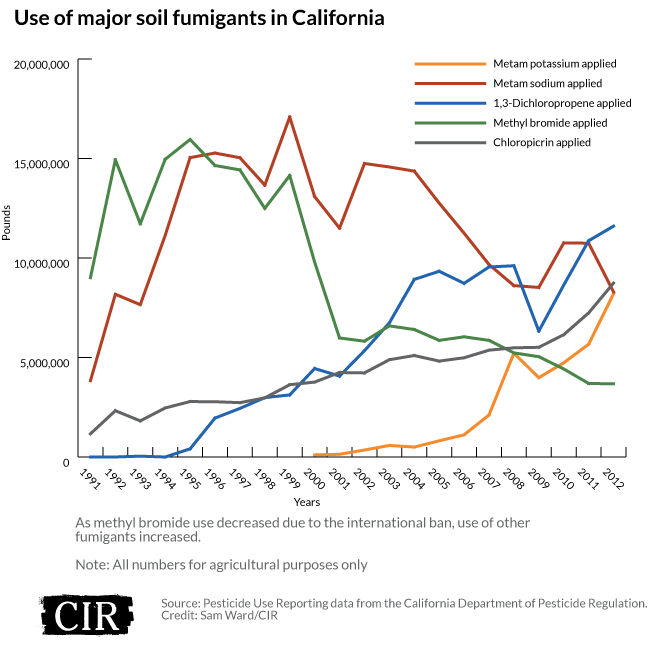 5. The most common pesticide used on crops in California is organic, and it’s not all that interesting.

Sulfur accounts for almost one-third of all pesticide use in California – nearly half a billion pounds in 10 years. That number is so large mostly because sulfur isn’t very potent. Farmers have to use a lot in order for it to be effective.

It’s not very toxic to humans (still, don’t inhale it), and it hasn’t been shown to be dangerous to bees, birds and most fish. Sulfur is also the oldest known pesticide – Homer talked about it killing pests as far back as 1000 BC. In California these days, more than two-thirds of sulfur used as a pesticide goes to grape crops.

This data is from the California Department of Pesticide Regulation’s Pesticide Use Reporting program. We analyzed data from 1991 to 2012, the most recent data available. We limited our analysis to agricultural uses only. We excluded records that indicated the pesticides were applied to things such as structural fumigation, landscape maintenance and public health uses such as mosquito spraying, unless otherwise noted. CIR excluded records the department flagged as having invalid location data, dates out of range, extreme outliers and duplicates. In 2002, the department bolstered its error identification process to look for a variety of problems. Prior to that, the department flagged only extreme outliers.

This story was edited Andrew Donohue and copy edited by Nikki Frick.

By Rachael Bale Reveal from The Center for Investigative Reporting November 14, 2014