Art, journalism and local surveillance collide in ‘Eyes on Oakland’ 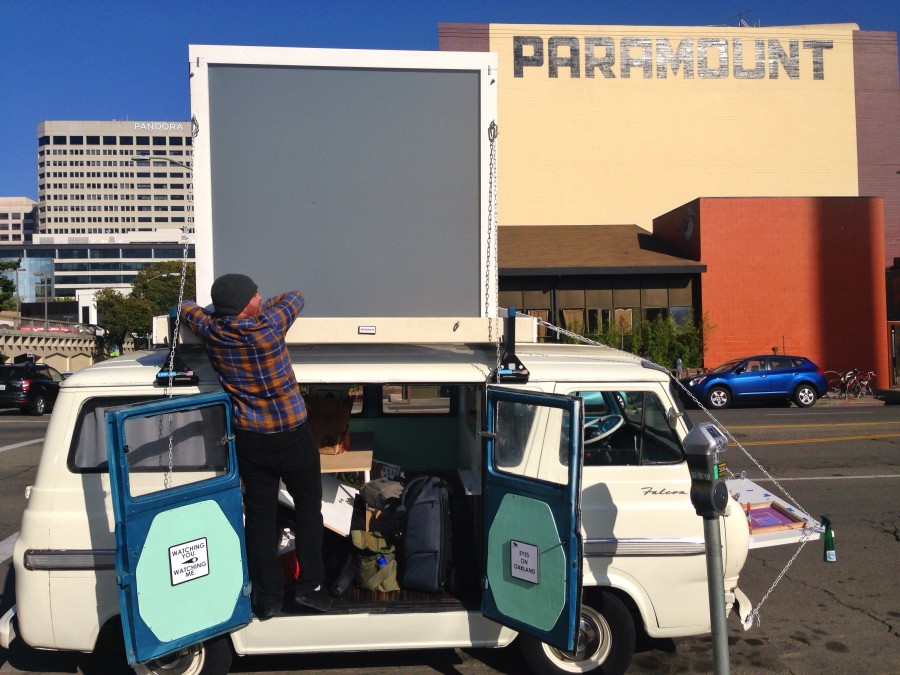 The Center for Investigative Reporting and the Mobile Arts Platform will visit locations around Oakland to distribute information and collect insights about local surveillance technology.

In The Center for Investigative Reporting’s ongoing experiments at the intersection of art, investigative journalism and community engagement, we’re about to present our work to two new venues: the Oakland Museum of California and a Ford Falcon van.

Through “Eyes on Oakland,” our new collaboration with Oakland-based artists of the Mobile Arts Platform, we’re going on a three-month campaign to inform Oakland residents about the various types of surveillance technologies that are used locally while gathering input about its role in their lives.

We’ll collect those insights by driving around Oakland in the Mobile Arts Platform, a van that we’ve retrofitted as a roving newsroom and mobile art installation, to interview residents about their attitudes toward the information law enforcement collects on them and the access (or lack thereof) they have to that information.

Those conversations will feed an interactive, community-powered installation at an exhibit opening at the Oakland Museum next week entitled, “Who Is Oakland?”, centering on an artistic re-creation of the city’s controversial Domain Awareness Center. A screenprinting station at the front of the van will allow visitors to make their own Eyes on Oakland logo to take home.Credit: Cole Goins/Reveal

A joint project between the Port of Oakland and the city, the Domain Awareness Center was intended to create a network of sensors and cameras to secure the port, but it ballooned in scope to a citywide surveillance center that would merge closed-circuit television footage, gunshot detectors, license-plate readers, social media feeds and more into a centralized facility.

But facing intense opposition from privacy advocates and local residents, the Oakland City Council voted in March 2014 to dramatically scale back the Domain Awareness Center and limit its use to the port and Oakland International Airport, and it ordered the creation of a privacy policy for the system. You can read the draft policy, which is open for public comment, here.

Our installation aims to appropriate the concept and imagery of the Domain Awareness Center, using it as a space to learn about surveillance, rather than a place to be monitored. The piece will feature six screens showcasing a variety of surveillance-related material, including audio, video and photo responses from our interviews with residents; footage from closed-circuit television cameras around downtown Oakland; social media contributions; and more.

Why are we doing this?

The nature of surveillance technology often is cloaked in secrecy, and many tools are procured and deployed by local municipalities and police departments with little public notice or debate. The proposal for the citywide Domain Awareness Center originally was listed in July 2013 as an item on the City Council’s consent calendar – generally reserved for noncontroversial items – until activists noticed it and began rallying opposition.

While the Domain Awareness Center has been reduced in scope, the various technologies it would incorporate still are used across the city and collect information on many Oaklanders, regardless of whether they’ve committed a crime. This exhibit is intended to build on the debate sparked by the Domain Awareness Center, exploring the tug-of-war between privacy and public safety.

We want “Eyes on Oakland” to be an opportunity to discuss the types of data that police collect, why they’re collected, how they’re used and stored, and who has access. And we want to take the information beyond the walls of City Hall and directly into Oakland’s neighborhoods, putting information into residents’ hands and hearing what they have to say.

In the process, we hope this project will spark a broad range of conversations about Oakland residents’ relationships with surveillance and how the intersection of privacy, power and access reflects and perpetuates local dynamics and identities.

How you can help build ‘Eyes on Oakland’ The “Eyes on Oakland” van has a backlit projection screen that will showcase residents’ insights about surveillance technology. Credit: Cole Goins/Reveal

We’re just getting started with “Eyes on Oakland,” so there’s plenty of time and opportunity to participate. Here’s how:

Meet us at the “Eyes on Oakland” van. For the next three months, we’ll take our van to locations across the city to display and distribute information about surveillance technology and get feedback from residents. We’ll incorporate audio, video and photos that we collect (with your permission, of course) into the exhibit during its run at the Oakland Museum. You can find out where to find the van by following us on Twitter: @EyesOnOak.

Join the conversation on social media. We’ll use #eyesonoak on Twitter to regularly ask questions and share information about local surveillance technology. Your responses will be threaded into our exhibit, so don’t be shy.

Follow our travels on Tumblr. We’ve launched a new Tumblr blog to highlight some of the responses we get during the course of our exhibit. Check back often for new photos, videos and more.

Visit the “Who Is Oakland?” exhibit at the Oakland Museum of California. The exhibit opens to the public on Saturday, April 11, but we’ll be adding more material throughout its three-month span, so be sure to come back and see it grow with contributions from fellow Oaklanders. “Who Is Oakland?” will be on display through July 12.

Have questions or a story to share? Want to request a visit from the “Eyes on Oakland” van? Email us at eyesonoakland@cironline.org.

Art, journalism and local surveillance collide in ‘Eyes on Oakland’

By Cole Goins Reveal from The Center for Investigative Reporting April 2, 2015