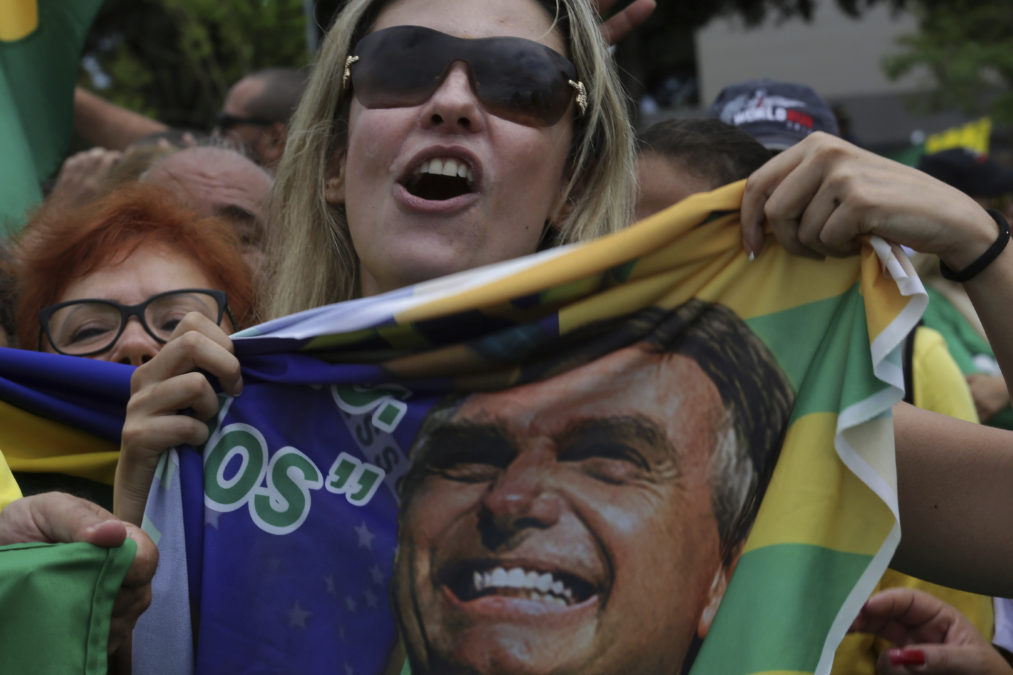 Supporters of presidential candidate Jair Bolsonaro, of the right-wing Social Liberal Party, rally in Brasilia, Brazil, Sunday, Oct. 21, 2018, one week before Brazilians return to the polls on Oct. 28 for the second round of voting.

RIO DE JANEIRO – Earlier this month, Julyanna Barbosa, a transgender woman and former lead singer of a Brazilian pop band, was walking across a bridge in the suburb of Novo Iguaçu in northern Rio de Janeiro when a gang of men approached her.

“Bolsonaro will win and get rid of faggots like you,” the men allegedly shouted, referencing Jair Bolsonaro, the front-runner in Brazil’s heated presidential race. “Trash like you needs to die.”

The men proceeded to beat Barbosa with their fists and an iron bar until she lay, bleeding. Local residents took her to the hospital.

A few days later, students at the University of Sao Paulo woke to find that their dorm rooms had been defaced with swastikas overnight. “Go back to Bolivia,” had been scrawled next to the Nazi symbols.

Across Brazil, similar stories have unfolded in recent weeks. There have been dozens of reports of hate crimes against Afro-Brazilians and the gay community. Journalists have been targeted merely for doing their jobs. Mobs have threatened TV crews chanting “communists.” A reporter in the Northeastern State of Pernambuco was stabbed by a man wearing a Bolsonaro T-shirt.

I’ve been in a unique position to watch this horror show unfold. For the last two years, I have covered the hate and extremism that unfurled in the United States since President Donald Trump’s election. For more than 18 months, I have written a weekly bulletin called the Hate Report, detailing hate crimes, the rise of the American alt-right, anti-Semitic threats and graffiti and, of course, the daubing, spray-painting, scratching and even burning of swastikas across the United States.

I have done this working remotely from an apartment in Rio de Janeiro not far from where Bolsonaro has a beachside house.

The former paratrooper’s rise from fringe candidate to firm favorite to become Brazil’s next president has, of course, been likened to Trump’s rise from reality TV star to the White House.

A misogynistic, hateful politician, he has said, among other things, that he would rather one of his sons were dead than gay. He sneered at a fellow congresswoman, telling her twice (once on the floor of congress) that she “wasn’t worth” raping. He dedicated his vote to impeach Brazil’s first woman president, Dilma Rousseff, to the colonel who ran the unit that tortured Rousseff and others during the country’s military dictatorship. Indeed, Bolsonaro is fond of saying that he supported the dictatorship, which ended in 1985, only wishing only that the death squads had killed tens of thousands more people.

As Bolsonaro has risen up the polls, and especially after he handily won the first round of voting on Oct. 7, he has ushered with him a wave of hate speech and political violence the likes of which haven’t been seen in Brazil for decades.

But for an American living in Brazil who researches extremist violence, it’s far too familiar. The news here recently is eerily reminiscent of the months that preceded and followed Trump’s election. Last year, I spent weeks calling scores of victims of hate attacks and hate speech in which attackers specifically mentioned Trump — dedicating their violence, anti-Semitism, Islamophobia and homophobia to a president they believed supported their actions.

The Brazilian investigative journalism collective Agencia Publica has already compiled a list of at least 50 attacks carried out across Brazil by Bolsonaro supporters. And he’s not even president yet.

“Of course we had hate crime before, but I think this is the first time that this has been connected to politics and the political wave that’s happening,” Rio-based political scientist Mauricio Santoro told me this week. “I think there are many things in common with what has happened in the United States – not the same political organizations, but the same political climate, the same feelings of anger, hate and polarization. And I think the results will be the same here in Brazil – a rise in hate crimes and hate speech.”

Brazil has also seen a rapid rise in the popularity of the alt-right social media site Gab. The site, which prides itself on allowing people to spew vitriol and racism, has become the go-to sump for luminaries of American white supremacy who have been kicked off Twitter and Facebook for their views. Brazilian Gab, which accounts for the second-highest number of members after the U.S. according to Alexa.com, is flooded with Bolsonaro supporters.

Brazil, of course, is vastly different from the U.S. More than 50 percent of Brazilians identify as non-white, and, as Santoro put it, “even those who are white, most don’t really see themselves as white – almost everybody is mixed race.”

But in Brazil racism still festers, and Bolsonaro has tapped into long-simmering resentments held by the country’s largely white upper and upper-middle classes. He has attacked indigenous rights, saying he will open up the Amazon to greater exploitation, allowing mining on indigenous land. He has pledged to cut back on affirmative action, and said earlier this year that Afro-Brazilians aren’t owed anything from Brazil’s hundreds of years of slavery. (About 10 times as many slaves were brought to Brazil as were taken to what’s now the United States.)

And, crucially, Bolsonaro has promised to wage war on Brazil’s favelas, poor neighborhoods overwhelmingly populated by non-whites, where most police violence already occurs. “I will give police carte blanche to kill,” he has said. “Police that kill thugs will be decorated.”

If Trump has gone beyond political dog whistles to his supporters, Bolsonaro uses a megaphone — both sending clear signals that it’s OK to express hate and anger towards their neighbors and people who don’t look like them, or don’t have the same sexual identity. But – and it feels truly extraordinary writing this – where Trump has displayed occasional moments of chagrin at the actions that have sprung from his words, Bolsonaro seems to delight in saying whatever is most likely to rile up angry people in this violent country to hurt, maim and kill their opponents.

As Americans have discovered, hateful bluster from their head of state has led to spiking hate crime statistics and frequent bloody brawls led by angry young men seeking to impress their president. In Brazil, which saw a record 64,000 homicides in 2017, Bolsonaro’s words will serve to pour gasoline on a fire that is already burning out of control.

By Will Carless Reveal from The Center for Investigative Reporting October 26, 2018