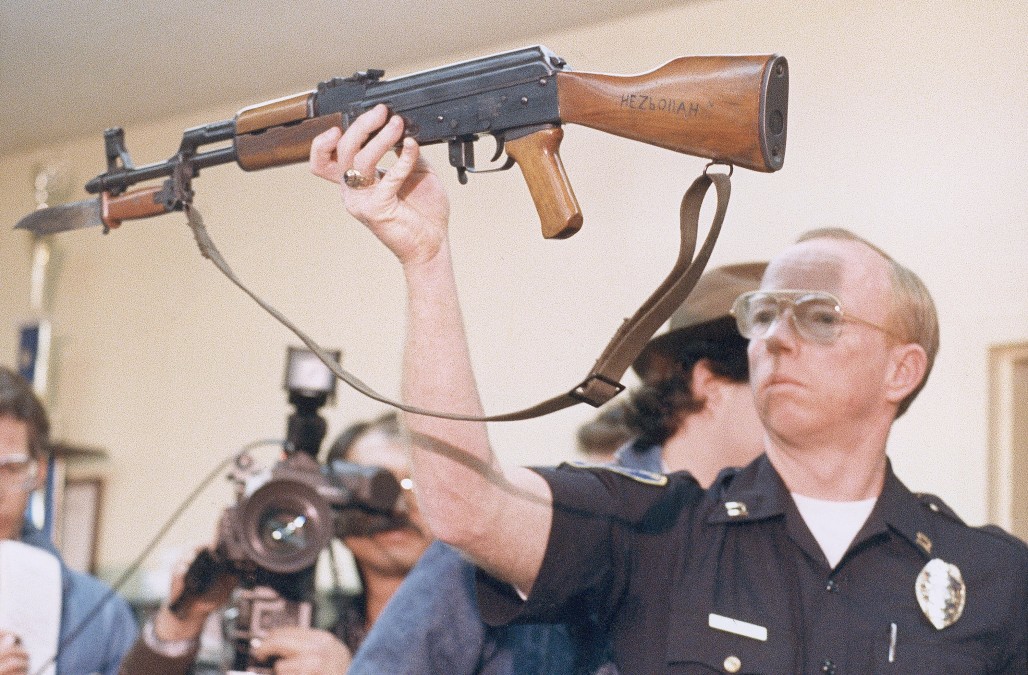 Stockton police Capt. J.T. Marnoch holds up an AK-47 assault rifle that a man used to kill five children and injure 30 others at a Stockton, Calif., elementary school in 1989.

These aren’t your grandfather’s hunting rifles.

Uzi’s, AK-47s, AR-15s, Bushmaster semi-automatic rifles – all are banned by California’s Assault Weapons Control Act. Yet thousands of the guns legally remain in the state.

Anyone who registered an assault weapon with the California Department of Justice’s Bureau of Firearms before Jan. 23, 2001, effectively was grandfathered in. All told, that’s 145,253 guns that would be illegal if purchased today.

Owners of these grandfathered guns need to keep a signed letter from the state proving they are the legal owner. They aren’t allowed to sell it or give it away; it’s a felony to transfer ownership of a registered assault weapon. Three variations of the AR-15 assault rifle are displayed at the California Department of Justice in Sacramento, Calif. While the guns look similar, the bottom version is illegal in the state because of its quick reload capabilities.Credit: Rich Pedroncelli/AP file

“These weapons are appropriate on the battlefield, not in civilian hands,” said Laura Cutilletta, a senior staff attorney at the San Francisco-based Law Center to Prevent Gun Violence. “We would rather there not be thousands of Californians who own military-style assault weapons. However, if a state is going to grandfather weapons, requiring registration and limiting transfer of grandfathered weapons, as California does, is critically important.”

Rick Travis, field director for the California Rifle and Pistol Association, the state affiliate of the National Rifle Association, declined to comment.

In addition to the host of guns grandfathered in and guns specifically made to sidestep provisions of California law, two other major exemptions exist: for law enforcement officers and for applicants who establish good cause for a special permit issued by the Department of Justice.

Examples of good cause recognized by the state include selling weapons to law enforcement or military, fulfilling government contracts, using weapons as props in movies or television shows and “maintaining a collection of destructive devices.”

California is one of nine states plus the District of Columbia that regulate assault weapons, according to the website smartgunlaws.org. And it was the first state to ban semi-automatic assault-style rifles. The law followed a 1989 shooting at Cleveland Elementary School in Stockton, where five children were killed and one teacher and 29 students injured by a man armed with a semi-automatic AK-47.

The law reads, in part:

“The Legislature hereby finds and declares that the proliferation and use of assault weapons poses a threat to the health, safety, and security of all citizens of this state. The Legislature has restricted the assault weapons specified [later in the act] based upon finding that each firearm has such a high rate of fire and capacity for firepower that its function as a legitimate sports or recreational firearm is substantially outweighed by the danger that it can be used to kill and injure human beings.”

Initially banning guns by name, lawmakers later amended the law to cover a list of generic characteristics associated with the weapons. This came after gun manufacturers changed the names of guns and marketed them as new, even though in many cases there were few if any substantive changes from the previous year’s model.

Today, the law prohibits three categories of guns. The first bans weapons by name, such as the original Colt AR-15. The second covers the popular AK and AR-15 rifle platforms, which include a host of similar guns made by different manufacturers. And the third includes guns that feature generic characteristics, such as pistol grips and telescoping stocks, which are largely cosmetic.

Banned guns are easily made legal, however, by adding features such as a fixed-magazine “bullet button.” A single round of ammunition is used to push a bullet button in order to remove a magazine and reload.

A 2013 bill that would have closed the so-called bullet button loophole died in the Legislature almost as quickly as its author, disgraced former Sen. Leland Yee, fell from power. (Lee recently pleaded not guilty to a host of charges, including that he was involved in an effort to illegally smuggle guns from the Philippines.)

Some highly customizable semi-automatic rifles such as the AR-15 also are being assembled by individuals at home and made with unmarked parts that don’t require government registration.

By Matt Drange Reveal from The Center for Investigative Reporting March 13, 2015