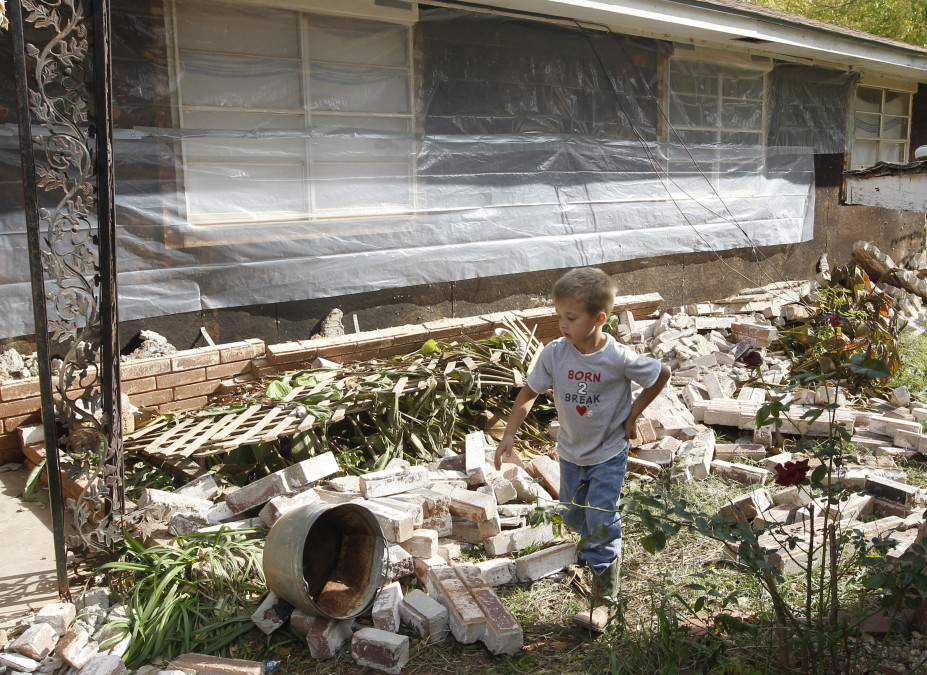 Logan Devereaux, 5, walks past bricks that fell from a home in Sparks, Okla., following two earthquakes in 2011.

The U.S. Geological Survey said today that it’s planning to significantly upgrade its forecasts of seismic hazards in places such as Oklahoma that have seen dramatic increases in earthquakes since 2009.

New geological survey research shows “that the earthquake ground-shaking hazard is very high and is comparable to ground shaking in other seismically active areas of the country,” said Mark Petersen, a seismologist who leads the group that publishes the nation’s seismic hazard models. “These new models all indicate that earthquake rates have increased significantly as a result of man-made activity.”

Petersen said the ground-shaking forecasts were comparable to parts of California and the New Madrid seismic zone. The New Madrid fault, which runs from southern Illinois through Missouri, Arkansas, Kentucky and Tennessee, produced a magnitude 7 earthquake in 1811.

The new draft report, presented this week at the Seismological Society of America’s annual meeting in Pasadena, California, sets out how the geological survey might quantify its understanding of risks from earthquakes caused by human activities. Once finalized, the models could have dramatic effects. The models are used by the insurance industry to help determine rates and by engineers to determine how big of an earthquake their buildings must withstand.

The report identified 17 areas in the central and eastern United States that the geological survey says are experiencing induced earthquakes caused by fluid injection, a byproduct of oil and gas drilling activities.

The geological survey said parts of Alabama, Arkansas, Colorado, Kansas, New Mexico, Ohio, Oklahoma and Texas have experienced increased rates of induced earthquakes. In 2014, Oklahoma experienced more than three times as many earthquakes of magnitude 3 or greater than California. Oklahoma is well above that rate in 2015, with more than 275 earthquakes of 3 or higher so far, according to the Advanced National Seismic System global earthquake catalog.

Petersen said the geological survey also found that other areas of the world with similar midcontinent faults – faults not along a tectonic plate boundary – have experienced magnitude 7 or higher earthquakes in the past. That’s a higher magnitude than other studies previously projected. A geological survey study from earlier this year using different methods said some areas of Oklahoma – near the college town of Stillwater, for example – had newly activated fault systems that could see a magnitude 5 or 6 earthquake.

Petersen said that whatever the maximum magnitude, the hazard group’s research made it clear that large areas of north-central Oklahoma were at risk of damaging ground shaking.

Petersen pointed to the magnitude 6 earthquake that hit Napa, California, in 2014 as a warning to the central United States.

“It caused several hundreds of millions of dollars in damage,” Petersen said. “And that’s the kind of earthquake that we would be saying could happen in that area.”

The report is written in the language of structural engineers and focuses on variables like “5 Hz spectral acceleration” that likely won’t mean much to a general audience. But incorporating the new models into building codes could take six years. But the panel said it’s likely that the earthquakes linked to wastewater injection will have moved before then, because induced earthquakes often start when injection enters a new area and slow down once the injection stops.

“It’s hard to build a building that could stand there for 50 years to 100 years and build it to some super-high ground-shaking level when somebody might quit pumping and the seismicity turns off,” Petersen said.

The geological survey says future reports, which it plans to release annually, will be written so that regular people and policymakers can understand them. Previously, the agency released new models only every six years.

“If you live in one of these areas of induced seismicity, you should educate yourself and those near you on the proper actions to take before, during and after an earthquake,” Petersen said.

The new geological survey report was the most recent in a flurry of developments related to earthquakes in Oklahoma and other states with induced seismicity.

On Tuesday, the Oklahoma Geological Survey released an expanded database of faults that included information submitted by oil companies in the state.

Also on Tuesday, the state’s geological survey released a statement that amounted to its first official acknowledgement that the majority of Oklahoma’s recent earthquakes were “very likely” triggered by wastewater injection wells.

And a Southern Methodist University team announced the results of research showing that a combination of fluid injection and renewal caused a series of earthquakes near Azle, Texas, in 2013 and 2014.

This story was edited by Jennifer LaFleur and copy edited by Nikki Frick.

By Michael Corey Reveal from The Center for Investigative Reporting April 23, 2015