Even organic strawberries are grown with dangerous pesticides 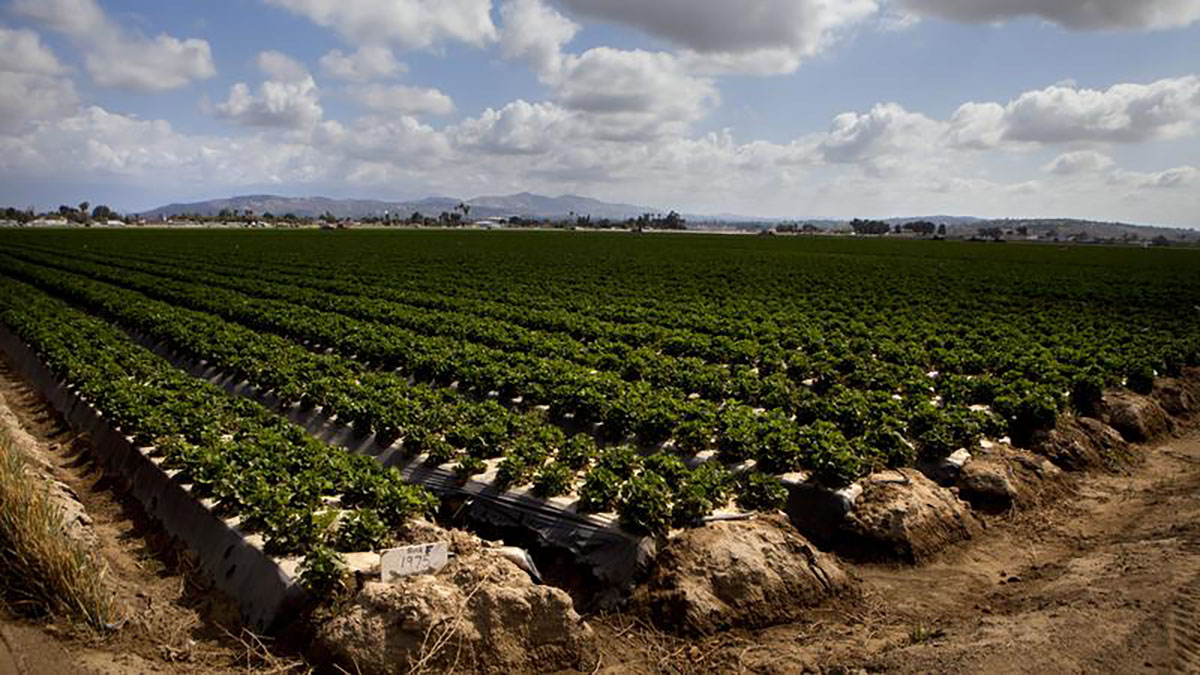 A strawberry field in Oxnard, California.

After our investigation revealed just how much dangerous pesticides it takes to grow strawberries, many people wrote to us saying they would start buying organic.

But even that won’t fully address the problem: When they are starting out, organic strawberry plants are grown with the help of fumigants, the hard-to-control class of pesticides that have been linked to cancer, developmental problems and the hole in the ozone layer.

Strawberries don’t grow up where they are born. They get their start in nurseries in inland Northern California before being shipped south in an effort to mimic natural progression of winter to spring. They finish their lifespan along the California coast in places such as Monterey and Ventura counties.

Regardless of whether one of these baby plants – known as starts – ends up on a conventional or organic farm, the nursery soil is pumped with fumigants to eradicate the pests and diseases that can haunt strawberry farmers.

If they’re matured on an organic farm, these strawberries still can be certified organic.

The federal code allows organic farmers to use strawberry starts grown in fumigated soil if there are no organic starts “commercially available.”

And that’s the case in California. There isn’t a single organic strawberry nursery in the state. James Rickert’s Prather Ranch ran one from 2005 to 2009. The few who used his organic starts loved them. But, Rickert said, many organic farmers worried that they might import soil-borne pests into their own farms, even though Rickert’s plants were certified pest-free.

Rickert made organic starts commercially available, so why didn’t organic growers have to use them? Here’s the deal: National standards allow organic farmers to use nonorganic starts if “equivalent varieties” to what they usually plant are not commercially available. That clause was originally included more than a decade ago to help the fledgling organic industry make the best of what was available.

But today, it’s more of a lagging loophole. The problem is that “equivalent varieties” phrase – it allows a lot of wiggle room. For example, many organic farmers don’t sell their strawberries under their own name. Instead, they grow directly for big distributors, like Driscoll’s.

And those big distributors require their growers to use special varieties of strawberries that only the company owns – known as proprietary plants. Independent nurseries don’t have access to those plants, so they can’t grow them.

That meant when Rickert came along with his organic starts, many organic strawberry growers were able to pass on using them. He couldn’t grow the specific varieties they used.

Rickert and others sent a letter to the U.S. Department of Agriculture in 2011, encouraging the government to update its standards to require organic strawberry starts in order for the berries to carry an organic label.

An official told The Bay Citizen in 2011 that updated standards would do exactly that, but the most recent 2013 standards still have the loophole.

“I’d love to get back in that industry but I just don’t feel like anything has changed,” Rickert told me. “Until [the government says], ‘We will not certify your strawberries unless you grow with organic plants,’ I really don’t think there’s a business opportunity there.”

Keep in mind that organic strawberries really do require fewer fumigants than conventional ones. Organic strawberry growers do not use fumigants. Once the strawberry start leaves the fumigated soil of the nursery, it’s supposed to never see a synthetic pesticide again to be labeled organic.

Conventional growers, on the other hand, fumigate their soil before planting the starts. And these farms – unlike the nurseries – are more likely to be near higher-density areas. See, for example, Monterey and Ventura counties on our Pesticides Hotspots map. These areas have more people living near farms than there are people living near nurseries in, say, Shasta or Lassen counties.

Many organic farmers don’t mind, though. It’s better to be extra safe and use a strawberry start grown in fumigated soil, they say. One infected strawberry start could wipe out their entire crop of organic strawberries.

Even if you do buy conventional strawberries, there’s no risk of ingesting fumigants. The soil is treated, not the fruit or plants themselves, so you won’t find leftover fumigants on your fruit. The risk with fumigants is to the farmworkers who apply them and the people who live nearby and might be exposed to drifting gas.

An experiment to change the rules

The idea that organic growers should use organically grown strawberry starts is starting to gain momentum.

A small group of farmers and advocates is trying to change things. The Center for Food Safety, an organic advocacy group, is leading a project with Greenheart Farms in Central California to grow an experimental nursery crop of organic strawberry starts. In November and December, six organic farms planted those starts in soil for the first time.

The experimental starts arrived at Dale Coke’s organic farm in San Juan Bautista in early November. They still had green leaves and were planted individually in little pyramid-shaped containers called plugs. Coke planted them in the soil near his usual starts, which arrived, as usual, not packed in containers and already asleep for the winter.

The point of the trial is to figure out how to make organic starts commercially viable, said Lisa Bunin, the Center for Food Safety’s organic policy director and the project’s coordinator.

That means two things: persuading farmers there’s no chance the starts could infect their soil with pests, and making those starts cheap enough.

Greenheart Farms is growing its trial starts in sterile planting material. There’s no soil involved whatsoever. That means there’s no need to fumigate to get rid of pests – there are none in the first place.

“In a greenhouse situation, it’s much more of a controlled environment,” said Bill DeVor, Greenheart Farms’ general manager and COO. “You’re always up above the ground where you can protect the plants.”

Now that the starts have reached their final destination, they have a few months before their next test – actually growing berries.

Growers will be looking for color, size and taste that matches their regular organic crops. Coke and another grower, Steve Pedersen of High Ground Organics in Watsonville, said they are especially interested in how many berries each plant produces.

“You have to make sure you’re getting enough off that plant to be able to pay for it,” Coke said.

“It’s very interesting and intriguing, and it feels good what we’re trying to do,” he said. But if no one can afford it, “It’s pretty much dead in the water.”

Bunin and the trial participants are hoping to find a university home for the project, which would better ensure ongoing funding and support.

Now’s the time for this kind of project, Bunin said. The United States, under an international agreement called the Montreal Protocol, is working to phase out the ozone-depleting pesticide methyl bromide – the strawberry nursery industry relies heavily on it. The USDA has a program that researches alternatives to the pesticide, but none of its projects focus on strawberry starts.

“When it comes to getting methyl bromide out of organic planting stock production,” Bunin said, “it’s not where the government sees its priorities.”

Correction: An earlier version of this story misstated when berries from organic strawberry starts would go to market. They will be available for sale this spring.

Even organic strawberries are grown with dangerous pesticides

By Rachael Bale Reveal from The Center for Investigative Reporting December 11, 2014