This story was produced with

Security guards carry firearms to protect people and property, but the benefits of armed guards have long been a matter of faith rather than a proven fact.

An analysis of FBI bank crimes data by The Center for Investigative Reporting found guards with guns pose a significant risk in those hostile situations. The presence of armed security during bank robberies increased threefold the likelihood of a violent event, according to the analysis.

While volumes of data and research have examined sworn police officers’ effectiveness, the CIR study is among the first to measure how arming civilian guards affects public safety in the United States. CIR’s analysis of the data can be read here.

“Personally, my company doesn’t do any armed work. None of the clients I have want armed officers. When they ask for them, my first question is always, ‘Who do you want us to shoot?’ ” — Glade Johnson, security company owner and Georgia state regulator

The FBI database is highly detailed and offers a rare view into what happens in hostile situations. It documents bank crimes reported to the FBI from 2007 to 2011, totaling more than 31,000 incidents, and defines violent events as a physical altercation or use of a weapon, which at times resulted in injuries and death.

Guards with guns were a rarity at banks – they were on duty during fewer than 2 percent of the incidents. But when they were around, their presence was the strongest factor in whether the situation turned violent, and this held true even when controlling for other factors. 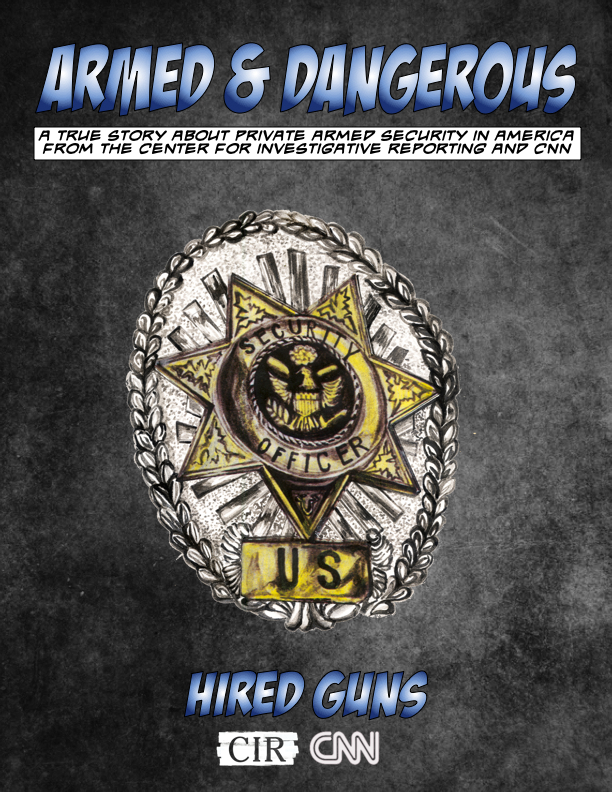 The finding that armed guards may endanger public safety is a sentiment long echoed by the insurance and banking industries. In 1986, federally funded researchers analyzed a sample of bank robberies in Indiana and concluded that armed guards increased the probability of serious violence. At banks under attack, “bullet resistant glass is preferable to an armed guard,” the study’s authors wrote.

The Indiana study three decades ago found armed bank guards were on duty during almost 8 percent of robberies in the state. Today, banks appear to be hiring fewer armed guards. The nationwide FBI data shows that guards carried guns during slightly more than 1 percent of the crimes.

“The tellers are trained to hand the money over, so the armed guard is not going to start a shootout,” said Sarah Grano, a spokeswoman for the American Bankers Association. “The teller gets the robber out as quickly as possible for the safety of everyone.”

For at least one former bank robber, the presence of an armed guard during a heist can add an element of chaos. Joe Loya, who the FBI contends robbed more than 40 banks and who spent seven years in prison, said he would avoid banks with guards because of the potential for violence.

Along with the banking industry, some state regulators believe armed guards increase the risk of violence. Glade Johnson, a security company owner who serves as chairman of Georgia’s Board of Private Detective and Security Agencies, said he requires all of his guards to take drug tests, something that is not required by state law. He also refuses to hire armed guards.

Johnson said he realized long ago that armed guards increase the chance of someone getting hurt. When he worked for another security company in the 1980s, Johnson recalled, one of his guards posted at a bank got into a fight with an unarmed robber. The guard, who was armed, hesitated to shoot, and the robber grabbed the gun, shooting him three times in the chest and killing him.

“Personally, my company doesn’t do any armed work. None of the clients I have want armed officers,” he said. “When they ask for them, my first question is always, ‘Who do you want us to shoot?’ And they say, ‘Nobody.’ So let’s not put guns on them.”

Do you have experience as an armed security guard?

Recognizing the risk involved in arming guards, some of the largest security companies in the U.S. direct their guards to keep their guns holstered at all times. According to documents filed with state regulators, Securitas, G4S and other large security companies at some job sites forbid their guards to clean, inspect or even handle their guns unless they need to shoot someone in self-defense.

“You want to make sure they’re operating safely,” said Fiona Walters, a spokeswoman for G4S. “We don’t want any misfires.”

Reporter Rachael Bale and Senior Editor for Data Jennifer LaFleur contributed to this story. Ryan Gabrielson now works for ProPublica. This story was edited by Robert Salladay and Narda Zacchino and copy edited by Sheela Kamath and Nikki Frick.

By Ryan Gabrielson and Shoshana Walter Reveal from The Center for Investigative Reporting December 9, 2014