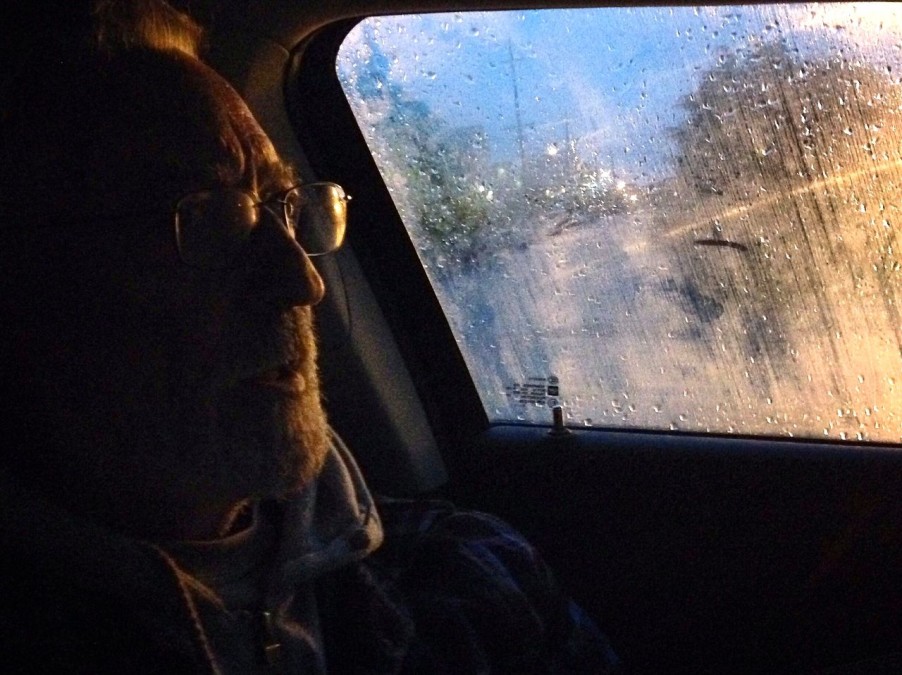 Dean Smith was frustrated with the lack of public information about oil train traffic so he organized 30 volunteers to count the trains coming through his community north of Seattle.

This story was produced by

EVERETT, Wash. – Dean Smith, 72, sits in his car by the train tracks here north of Seattle.

It’s a dark, rainy Tuesday night, and Smith waits for an oil train to come through town. These trains are distinctive: A mile long, they haul 100 or so black, pill-shaped cars that each carry 30,000 gallons of crude oil.

Smith has been counting the trains for about a year, noting each one on a website he built. The former National Security Agency employee does it because the railroads share little information about oil train traffic with Washington state. They don’t have to because they’re federally regulated.

Listen to this story

What is known: The railroads are moving 40 times more oil now than in 2008 due to an oil boom in the Bakken formation of North Dakota. Bakken crude oil contains high concentrations of volatile gas, with a flashpoint as low as 74 degrees Fahrenheit.

Derailments and explosions have occurred around North America since the oil boom began, including a 2013 catastrophe that killed 47 people in rural Quebec.

This has prompted emergency responders to call for more information from railroad companies about oil train traffic patterns and volumes. The railroads mostly have refused; they say that releasing that information could put them at a competitive disadvantage.

Which is why Smith decided to find out for himself. “It’s pretty hard to hide an oil train,” he said with a chuckle.

In their first week of watching oil trains, the group collected more information about oil train traffic than the railroads had given Washington in the three years the trains have come here.

State officials say Smith’s data is helpful but insufficient. They say they shouldn’t have to rely on citizen volunteers to get critical information in case of disaster.

Dave Byers, the head of spill response for the state’s Department of Ecology, said his team needs the information to plan area-specific response plans to protect the public and keep oil from getting into the environment.

Oil train traffic shows no signs of slowing, which adds to the state’s sense of urgency. The oil industry wants to build five new terminals in Washington to move crude oil off trains and onto ships.

Meanwhile, Congress is considering legislation to lift a federal ban on exporting crude oil that’s been in place since 1975 – allowing American crude to be shipped around the world.

Anyone who has attended a Mariners baseball game in downtown Seattle likely has seen or heard oil trains passing the ballpark. The trains continue north through the city to refineries on Puget Sound.

Seattle had a close call last year when an oil train derailed near downtown.

Byers and his team weren’t notified for one and a half hours and initially were not told there was oil in the derailed train cars.

No oil was spilled, but Byers is critical of how BNSF Railway, the company that moves most of the oil out of the Bakken oil fields, handled the situation.

BNSF did not tell the state there was highly flammable Bakken crude oil in the derailed train cars – that information came five hours later from the oil refinery waiting for the train. Additionally, Byers said that when his team arrived on the scene, no BNSF representative was present, but welders were working on the derailed cars. The welders said they did not know what was inside.

“We became concerned because people were wandering off the street and taking selfies of themselves next to the rail cars,” Byers said. “There was no preparing for the potential that one of those cars could actually start leaking.”

BNSF spokeswoman Courtney Wallace said in an emailed statement that BNSF Railway had its hazardous materials team quickly in place to evaluate the situation. “This derailment did not cause a release at any point, nor was there a threat of a release,” she said.

The state and BNSF Railway have sparred over the railroad company’s reports of hazardous materials spills. Earlier this year, state regulators released an investigation and recommended that BNSF be fined up to $700,000 for not quickly reporting these spills. The company has disputed the state’s findings. A final decision is expected next year. Workers prepare oil trains for unloading at the Tesoro refinery north of Seattle. The train that derailed in Seattle on July 24, 2014, was bound for the refinery.Credit: Courtesy of Tesoro

This spring, several hundred people packed into the Anacortes City Hall for information from oil companies and BNSF Railway about the oil trains moving through their community. Just that morning, a BNSF oil train had derailed and caught fire in North Dakota.

In northern Puget Sound, Anacortes is home to two refineries that receive oil by rail from North Dakota. Its residents, like others in small communities along the tracks in Washington state, have voiced concern about oil trains. Congestion woes are among their complaints; unlike Seattle, where the trains mostly pass through tunnels and over bridges, trains here disrupt traffic.

Audience members were allowed to submit written questions only. Oil refineries’ representatives told them about safety precautions at their facilities to prevent and respond to spills. They also talked about their commitment to getting newer oil train cars. Courtney Wallace is a spokeswoman for BNSF Railway. The company believes that every derailment or accident is avoidable. On the day this photo was taken, a train had derailed and caught fire in North Dakota. It was carrying the same type of crude oil that is currently moving through Washington state.Credit: Ashley Ahearn/KUOW/EarthFix

Wallace, the BNSF spokeswoman, gave a presentation about the company’s commitment to safety. She said BNSF believes that every accident is preventable.

When pressed by a reporter about how much information BNSF shares with local emergency responders, Wallace said BNSF has “always provided information to first responders, emergency managers about what historically has moved through their towns.”

She cautioned that sharing regular updates or notifications of oil train movements could put the public at risk.

“We’re always cognizant of what information is shared, because we don’t want to see an incident that involves terrorism or anyone else who might have that kind of frame of mind,” Wallace said.

Washington state lawmakers passed a law recently that requires oil refineries, which are state regulated, to give weekly notice of the train schedule to first responders. Washington state Rep. Jessyn Farrell is a Democrat who has fought for legislation that would force oil refineries to share information about how much oil is arriving by rail. Credit: Ashley Ahearn/KUOW/EarthFix

State Rep. Jessyn Farrell, a Seattle Democrat who sponsored the bill, said BNSF and the oil industry opposed the legislation from the beginning.

“We’re going to get the information,” she said. “I don’t really care who gives it to us as long as it’s good information and it stands in court, because we need that information now.”

BNSF Railway spent more than $300,000 on lobbyists and political contributions in Washington state in 2014.

“I think they’re absolutely on the wrong side of this,” Farrell said. “In the public mind, and morally, they are absolutely wrong.”

BNSF’s Wallace said the company still is reviewing the law to see how federal regulatory authority will interact with state authority.

Back in Everett, Dean Smith said he isn’t waiting for politicians or lawyers to duke this one out.

Instead, he’ll wait for trains, he said, and he’ll continue gathering information about them.

Four hours into a recent train-watching shift, Smith perked up.

“There’s something coming,” he said. He opened the door of his Chevy Volt and stepped into the rain. An orange BNSF engine emerged from the tunnel. Behind it were oil cars – about 100 of them, black as night.

The streetlight reflected off Smith’s glasses and shadows gathered in the furrow of his brow as he stood by the tracks, shoulders hunched.

“Sometimes I wonder, why fight it? Why not just move? That’d be the easiest thing to do,” he said. “But I think we have to fight. And I would like to see citizens groups acting like this all over the country. That’s the form of checks and balances we can create. All it takes is a few people.”

Produced by KUOW and EarthFix, this story is featured on the June episode of Reveal.

By Ashley Ahearn Reveal from The Center for Investigative Reporting June 13, 2015