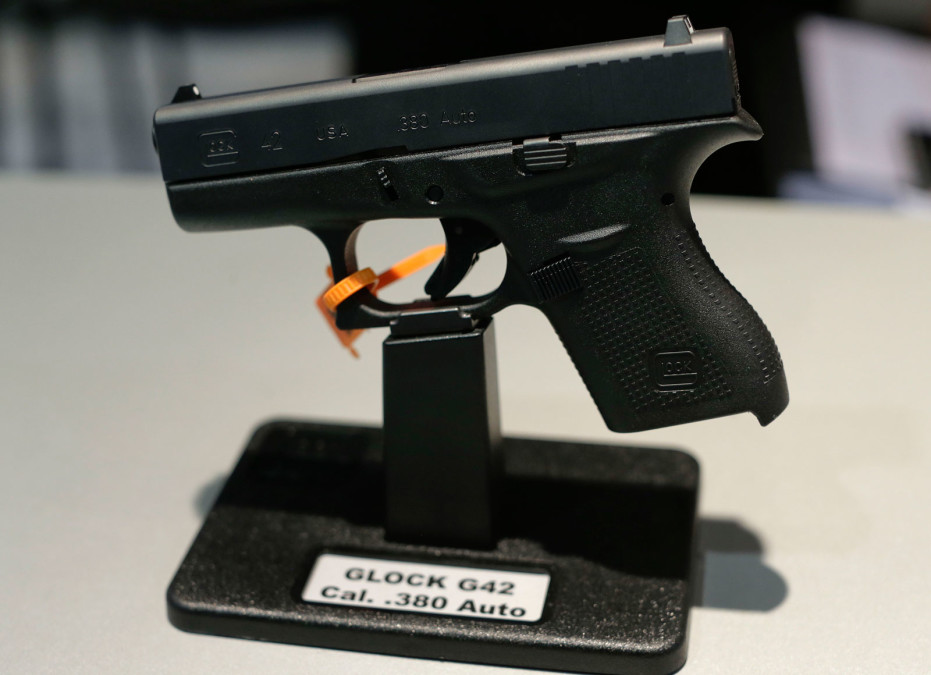 A Glock G42 pistol is displayed at a trade show in Las Vegas. Laws that affect sales at gun shows vary by state.

The Cow Palace has hosted the Beatles, The Who, the Rolling Stones and Nirvana, but on a recent Saturday afternoon, the cavernous hall near San Francisco was echoing with the piercing sound of stun guns.

The converted arena was crowded, with thousands of people trying not to bump into one another at one of the Crossroads of the West Gun Shows. The company that runs the shows claims to operate the largest network of gun show marketplaces in the country, with more than 500,000 visitors in the last year.

At the Cow Palace, all of the guns on display were secured with large plastic ties, rendering them inoperable. The pens used to fill out the free raffle cards are zip-tied, too, a jab at California’s strict gun laws. It’s an extra layer of security that isn’t found 230 miles away at another Crossroads gun show three weeks later in Reno, Nevada.

Gun owners flocked to the Reno-Sparks Convention Center, where they bought and sold one another’s guns amid rows of ammunition and assorted accessories. The two shows – a little more than a three-hour drive apart – reflect the dramatically different gun laws in the neighboring states.

Private-party sales without any government regulation are legal in Nevada if both parties live in the state. Credit: Matt Drange/Reveal

People walked out of the Nevada gun show carrying new weapons, some stopping to examine them again in the parking lot. In California, no one left with a gun – you can’t legally take possession of one without first passing a background check at a licensed gun store.

The differing state laws have made the I-80 corridor between Reno and the San Francisco Bay Area a well-traveled route by law enforcement looking to stop the movement of high-capacity magazines, which are banned in California but easy to get in Nevada.

In many ways, the two shows were similar: Each attracted thousands of people to pore over a slew of new and used guns, ranging from pink revolvers to camouflage hunting rifles and fully automatic machine guns available for rent. There were no loaded guns allowed inside either show, even if they were brought by people with concealed carry permits.

Crossroads makes its policy clear on its website: “Safety is our Number One Priority, and a safe environment in the show can only be maintained if there are no loaded guns in the show.”

Beyond that, some differences were easy to see.

At the Cow Palace, guns of all shapes and sizes lined the room, price tags dangling from their barrels. Vendors frequently displayed the words “California compliant” next to their weapons in recognition of laws that prohibit the sale of certain semi-automatic rifles and magazines that hold more than 10 rounds, among other things.

To comply, vendors offered large-capacity magazines outfitted with a special spring or plastic insert that limits the number of rounds. The resulting magazine looks much more accommodating than it actually is.

Another conversion on display at the Cow Palace was the so-called bullet button, added to AR-15-style semi-automatic rifles.

To be legal in California, an AR-15 can’t include a handful of largely cosmetic features, such as telescoping stocks and pistol grips. If the gun has any of those features, it’s considered an assault weapon and must have a bullet button, which forces the shooter to take an extra step when reloading.

Inside the Cow Palace, partially complete AR-15s were stacked in neat rows, with the small bullet button already installed.

In Nevada, the legal demands on sellers were far simpler. Dozens of AR-15s and AK-47-style rifles and parts could be purchased complete, with no modifications or restrictions. Some came with a 30-round magazine with a 6-inch suppressor – commonly called a silencer, even though it doesn’t entirely eliminate sound – waiting on an adjacent table for a few hundred dollars more. A vendor at the Crossroads of the West Gun Show in Reno, Nevada, displays a note explaining why he can sell guns only to Nevada residents.Credit: Matt Drange/Reveal

The most visible contrast between the California and Nevada shows wasn’t sitting on a table or inside a glass display case. It was riding on the backs of attendees.

In Reno, many visitors walked around with rifles slung over their shoulders – for sale. Private-party sales are allowed in Nevada, and at the gun show, they were openly advertised with brightly colored signs and hand-drawn notes.

One man carried a bullpup compact rifle with a “for sale” sign duct-taped to the end of the barrel. Asked if the gun was California compliant, he proudly pointed to the bullet button. Then he turned the weapon upside down, revealing a small plastic bag with the gun’s previous parts.

“In case you ever want to convert it back to original,” he added, grinning. Doing so would make the gun illegal in California.

California prohibits private-party sales. This means guns cannot legally change hands without first going through a licensed gun dealer, which then conducts a background check on buyers as if they were purchasing the gun directly from the store.

In Nevada, gun owners can sell firearms without any government involvement as long as the buyer also lives in Nevada. One vendor in Reno summed it up on a piece of cardboard propped next to a pair of pistols at the end of his table. He had scribbled these words on it in black marker: The Reno-Sparks Convention Center hosts a Crossroads of the West Gun Show. The company that runs the shows claims to operate the largest network of gun show marketplaces in the country.Credit: Matt Drange/Reveal

Besides firearms, both shows offered lots of other items for sale.

Vendors in Reno had everything from 40-round AK-47 magazines to camouflage fanny packs, inexpensive jewelry and an array of tactical gear such as armored vests with matching backpacks. One table featured survivalist camping gear, stocked with spicy penne pasta MREs (meals, ready to eat) prepared by U.S. military contractors.

Among the other items available at the Cow Palace were cowboy-style holsters, samurai swords and recycled ammunition. At least five vendors had beef jerky for sale.

Rows of manuals for guns used by soldiers around the world were on display. Multiple vendors sold camouflage body armor. Another offered partially complete lower receivers, which people can finish themselves at home to build an unmarked AR-15.

But the real action was at the far corner of the room. A crowd lingered all afternoon around a set of stairs leading to a makeshift classroom where, for a discounted price of $49, attendees could take a written test to qualify for a permit to carry a concealed gun.

Despite its Utah business address more than 750 miles away, the company administering the test, FairWarning Training, conducts much of its permit testing at California gun shows. A small sign above the classroom highlights the draw: Utah’s concealed carry permit is recognized by 33 other states (recent changes have bumped this number up to 35, according to the state’s Department of Public Safety), and you don’t have to be a Utah resident to apply. Neither California nor Nevada recognizes Utah permits.

Utah doesn’t require any of the additional steps necessary to get a permit in California, either, including demonstrating “good moral character” and providing a reason to carry a gun before going through formal safety training and shooting at a gun range. In Utah, you don’t even need to have fired a gun before getting a permit.

“It’s just a lot easier to get and maintain,” a FairWarning representative said as he prepared for the final class of the day.

Not every vendor was eager to speak with a Reveal reporter walking the floors of the gun shows. Back in Reno, Ried Bridges was closing up shop. Bridges collects AR-15 parts and sells them online, running a small business out of nearby Carson City, Nevada, called sfars_llc, shorthand for “Sh*t for AR’s.”

Bridges’ eBay store was shut down after Reveal published a story detailing how he had repeatedly violated the online company’s assault weapon policy.

As a Reveal reporter shook Bridges’ hand to say hello, he smiled and offered an upbeat, “Hey!”

The smile quickly vanished once Bridges realized to whom he was talking. He straightened his jacket and said, “Oh, aren’t you just the sweetest son of a bitch, coming over here after you shut down our whole eBay store?”

By Matt Drange Reveal from The Center for Investigative Reporting May 19, 2015