How a drug court rehab kept its participants’ workers’ comp 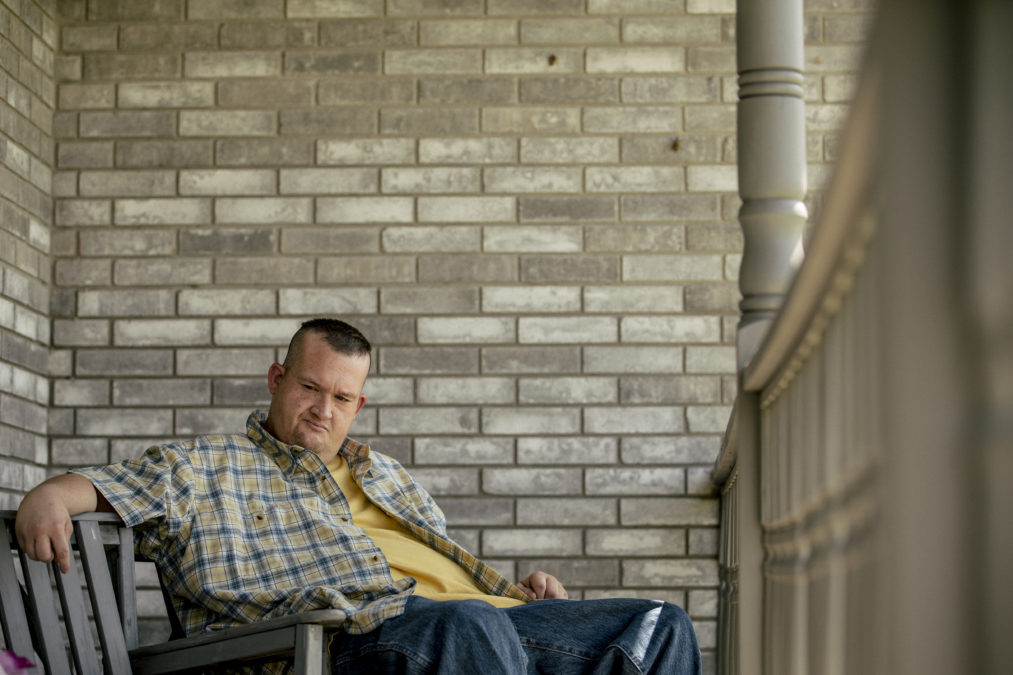 Brandon Spurgin was working at the plant when a metal door crashed down on his head one night in 2014, damaging his spine.

After Fred Barbee broke his ankle while working at a chicken processing plant in Arkansas, he expected time off to heal.

But he wasn’t in a normal workplace. A drug court judge in Tulsa, Oklahoma, had sent Barbee to a drug rehabilitation program called Christian Alcoholics & Addicts in Recovery, or CAAIR. The program makes men work without pay at plants owned by Simmons Foods Inc.

Because Barbee couldn’t work, the rehab kicked him out. It filed a workers’ compensation claim and collected the $7,100 payout. Barbee got none of it. Fred Barbee broke his ankle while working at a chicken plant in Arkansas. Credit: Oklahoma Department of Corrections

By law, workers’ compensation is required to go to the injured workers. But CAAIR routinely files workers’ comp claims for men injured in the chicken plants and collects the payments, Reveal from The Center for Investigative Reporting has found. CAAIR’s founders acknowledged it’s their standard practice.

“That’s the way it works,” said Janet Wilkerson, CAAIR’s founder. She said they keep the workers’ comp payments intended for the men to pay for the program’s food, housing and counseling costs.

“Yes, we did keep that,” she said. “Right, wrong or indifferent, that’s what happened.”

“If they (the workers) never received those benefits, that is insurance fraud,” said Philip Hood, commissioner of the Arkansas Workers’ Compensation Commission. He has opened an investigation into CAAIR in response to Reveal’s report, which he said could lead to criminal charges.

“That sounds like something from the early 1900s. And this is going on right now? And how is it legal?” he said. “Them being ordered to work for free is nothing short of slavery.”

A former judge with the commission was shocked by what CAAIR was doing.

A Reveal investigation published Wednesday showed judges are steering men and women from drug and other diversion courts into rehabs that are little more than lucrative work camps for private industry. Experts said it could violate the 13th Amendment and state drug court law.

The potential workers’ comp fraud raises a third legal issue for CAAIR, which is based in northeastern Oklahoma and sends workers to plants in Arkansas and Missouri.

Many defendants in the rehab program are unaware they’re entitled to the payments. That’s because CAAIR requires the men to sign forms stating they are clients, not employees, and therefore have no right to compensation for injuries.

Poultry plants are notoriously dangerous, with one of the highest workplace injury rates in the nation. Men in the CAAIR program said workers routinely were injured in the plants and fired when they couldn’t work. Nine compensation cases have been filed for participants in the program. They were sprayed with acid, maimed by machines or threw out their backs on the job. After they left the drug rehab, the injuries often made their lives more difficult. Jeffery Weaver got a hernia from hauling bags of chicken products at a chicken processing plant in 2014. Credit: Oklahoma Department of Corrections

Jeffery Weaver got a hernia from hauling bags of chicken products at the plants in 2014. CAAIR filed for workers’ comp and collected more than $2,500. He got nothing, according to his family.

He got kicked out of the rehab a month later, court records show, and found himself back in front of a judge. The judge sentenced Weaver to seven years in prison. His mother, Lisa, said he’s expected to be released later this month.

“That’s not right at all,” she said. “If I got hurt, I’d sure want my workers’ comp. Goodness gracious, it doesn’t sound right.”

Brandon Spurgin was working at the plant when a metal door crashed down on his head one night in 2014, damaging his spine.

Doctors put more than a dozen staples in his head. He thought he needed more medical attention, but he was scared to leave CAAIR. If he had, the drug court in Stephens County, Oklahoma, could have sentenced him to 15 years in prison, court records show.

“They’re just like, ‘Here’s some Tylenol. Can you get back to work yet? Can you go back to work?’ ” he recalled. “They don’t care. You’re just there to work, make them money.”

Spurgin continued working. CAAIR filed the workers’ comp claim on his behalf and collected more than $4,500 in compensation payouts. Spurgin never received any of the money. He eventually had surgery, remains in constant pain and can’t hold a full-time job.

After Fred Barbee broke his ankle in 2014 and left the program, CAAIR continued collecting his workers’ comp for four months, court records show. The program told its insurance provider that Barbee had returned to work at the Simmons plant, according to the filings with the Arkansas Workers’ Compensation Commission. That wasn’t true.

Court officials in Tulsa gave Barbee one more try. But injured and still in the throes of meth addiction, Barbee failed. Drug court Judge Dawn Moody sentenced him to two years in state prison. He was released in July.

Three years later, Barbee still has pain in his ankle and walks with a limp, according to his mother, Marguerite. She said her son still struggles to live a stable life.

“Everybody makes mistakes. They need to know somebody cares,” she said. “As long as I get my ‘I love you and I’m OK’ – even though sometimes I don’t think he is – that’s all I could ask for.”

This story was edited by Andrew Donohue and Amy Pyle and copy edited by Nikki Frick.

How a drug court rehab kept its participants’ workers’ comp

By Amy Julia Harris and Shoshana Walter Reveal from The Center for Investigative Reporting October 6, 2017