How Jeff Sessions could determine the state of democracy in Texas 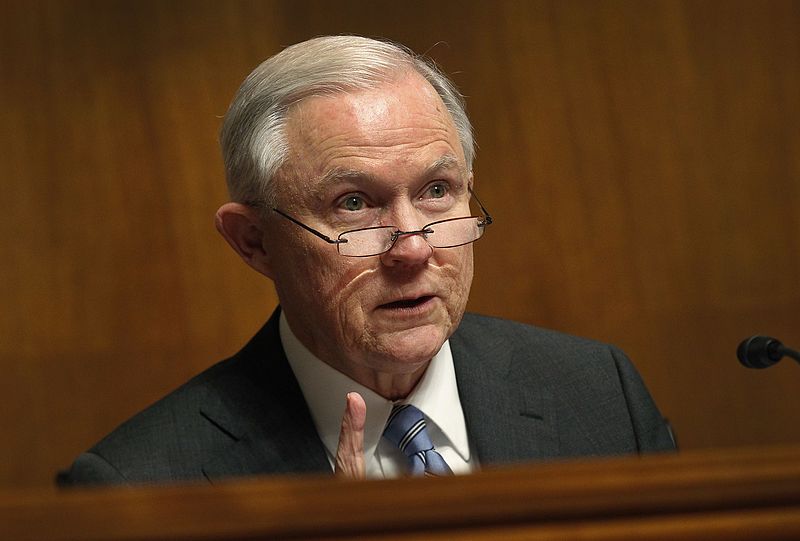 Attorney General Jeff Sessions has been one of the leading opponents of the Voting Rights Act.

Federal judges have ruled four separate times this year that Republican leaders in Texas rigged election systems to discriminate against minority voters, which potentially could land the entire state under federal oversight.

Under what’s known as preclearance, local and state governments with a history of discrimination cannot change their voting procedures without approval from officials in Washington. However, the man who would be in charge of that oversight, Attorney General Jeff Sessions, has been one of the leading opponents of the law Texas officials broke, the Voting Rights Act.

If Texas is put into preclearance, the internal workings of the Justice Department will play a crucial role in the health of the state’s democracy.

A Justice Department spokesman declined to make anyone available for comment and refused to provide a list of the jurisdictions that are subject to preclearance. Hasen said only the cities of Pasadena, Texas, and Evergreen, Alabama, currently are under preclearance.

Nevertheless, observers are watching what the courts will do in Texas and how Sessions’ Justice Department will respond. A 2013 Supreme Court ruling dramatically weakened the preclearance system, upending voting rights protections that had been in place since the civil rights era.

The Texas cases represent some of the first meaningful opportunities to see whether preclearance still can ensure that all eligible citizens have the ability to cast a ballot.

“These are test cases,” Hasen said.

Thomas Saenz, president and general counsel for the Mexican American Legal Defense and Educational Fund, which brought the Pasadena case, said his goal wasn’t getting the city under federal oversight. It was to get the courts to rule against the city’s voting changes.

“Precedent is more important,” he said.

Still, Sessions can save state and local governments from having to fight losing legal battles by stopping discriminatory laws from going into effect. Pasadena has spent over $2 million in legal fees defending changes to the makeup of its City Council.

In the mid-1980s, while serving as U.S. attorney in Alabama, Sessions led an unsuccessful voter fraud prosecution against three black civil rights activists, including a former personal adviser to Martin Luther King Jr., who were facilitating absentee voting among African Americans. Sessions contended that activists helping voters fill out ballots counted as election fraud, which could carry a lengthy jail sentence. The argument was rejected by a court as unconstitutional and the activists were cleared, stepping out of the courtroom to a cheering crowd.

Backlash from that case was a major factor in the scuttling of President Ronald Reagan’s nomination of Sessions for a federal judgeship.

During that judicial confirmation process, an African American lawyer who worked under Sessions in the U.S. attorney’s office claimed Sessions repeatedly had used racially derogatory language and once said of the civil rights cases that crossed his desk, “I wish I could decline on all of them.”

Other Justice Department appointees under President Donald Trump have a similar history of backing voter suppression efforts. Thomas Wheeler, acting head of the Civil Rights Division, advised Texas lawmakers on how to ensure their voter ID laws would survive preapproval scrutiny by President Barack Obama’s Justice Department. Wheeler has recused himself from working on the case in his current role at the department. As a lawyer in private practice, John Gore, the division’s deputy assistant attorney general, spent much of his career defending redistricting and voter ID efforts against claims of racial discrimination.

Staff attorneys at the Justice Department perform the initial analysis of whether changes to a voting system covered under preclearance are discriminatory, but the ultimate decision to approve or reject the change is up to senior political appointees.

“The political appointees were very active. We had a lot of knock-down, drag-out fights – not physically, although that’s always in the realm of possibility,” said Gerry Hebert, former chief of the voting section. “We had verbal debates and arguments over various things – particularly when it came to redistricting plans and things that were often intentionally discriminatory – but we couldn’t get the political appointees to object.”

Hebert said he saw major swings in priorities regarding minority voting access between different administrations. Democrats were adamant about removing obstacles, and Republicans more concerned with hunting down voter fraud.

Now, Sessions is in charge at an especially potent time for voting rights.

Over the past decade, Republican lawmakers around the country have introduced a slew of bills that restrict access to the voting booth. Architects of these bills insist such legislation is aimed at preventing voter fraud, a specter raised by Trump himself, who repeatedly has stated, without evidence, that millions of people voted illegally during the 2016 presidential election.

During the 2016 election, 14 states had voting restrictions in place that, for the first time, affected a presidential election. In 2017 alone, at least 99 bills aimed at restricting voting access have been introduced in 33 statehouses.

Research has shown in-person voter fraud to be a rare occurrence. In private conversations, some GOP officials have admitted the motive behind voter ID laws is partisan gain. Requiring voters to present valid government ID is disproportionately likely to affect poor and minority voters, who tend to lean Democratic and face financial and logistical challenges to getting IDs.

In recent months, courts have overturned a number of Texas’ voting changes. In the case of the voter ID law, a federal judge ruled that voter fraud was not a widespread problem and the law was designed to keep black and Latino voters from the polls.

In addition, judges have ruled that a pair of efforts by the state’s Republican-controlled Legislature to redraw congressional and statehouse districts were intentionally discriminatory. Those findings, which are being appealed, give judges the ability to put the state into federal oversight.

The government’s system for striking down discriminatory voting system changes didn’t always rely so heavily on the courts. With the passage of the Voting Rights Act in 1965, a handful of states with histories of racial discrimination were required to begin preclearing changes to their voting systems with the Justice Department. The law was a preventative measure, stopping discriminatory changes before they could go into effect and dissuading local and state governments from making rules that were unlikely to pass the department’s muster.

In 1975, Texas was added to the list of the nine states placed under preclearance by Congress. However, in its 2013 Shelby County v. Holder decision, the Supreme Court ruled that list was out of date.

Sessions, then a U.S. senator representing Alabama, hailed the Shelby decision. “If you go to Alabama, Georgia, North Carolina, people aren’t being denied the vote because of the color of their skin,” he said.

Now, states could make voting harder without needing the Justice Department’s permission. Shortly after the Supreme Court decision, the Houston suburb of Pasadena went forward with a plan to reconstitute its City Council to bolster the influence of white residents at the expense of Latino ones.

When SCOTUSblog asked Pasadena Mayor Johnny Isbell, a driving force behind the effort, why he chose that moment to make the change, he replied, “Because the Justice Department can no longer tell us what to do.”

Latino residents sued over the change, and a judge found it intentionally discriminated against minorities.

And, as Pasadena learned, there was another lesser-known way of ending up under preclearance: through a judge’s order.

Now, judges in the redistricting and voter ID cases could put the state of Texas in a similar position.

The Voting Rights Act doesn’t specify the precise circumstances under which a judge should implement preclearance once intentional racial discrimination is found, largely leaving it to the judge’s discretion, Hasen said. Last year, for example, a federal appeals court overturned North Carolina’s photo ID law, saying its provisions “target African Americans with almost surgical precision,” but declined to place the state into preclearance.

This story was edited by Andrew Donohue, who also contributed reporting. It was copy edited by Nikki Frick.

How Jeff Sessions could determine the state of democracy in Texas

By Aaron Sankin Reveal from The Center for Investigative Reporting May 19, 2017