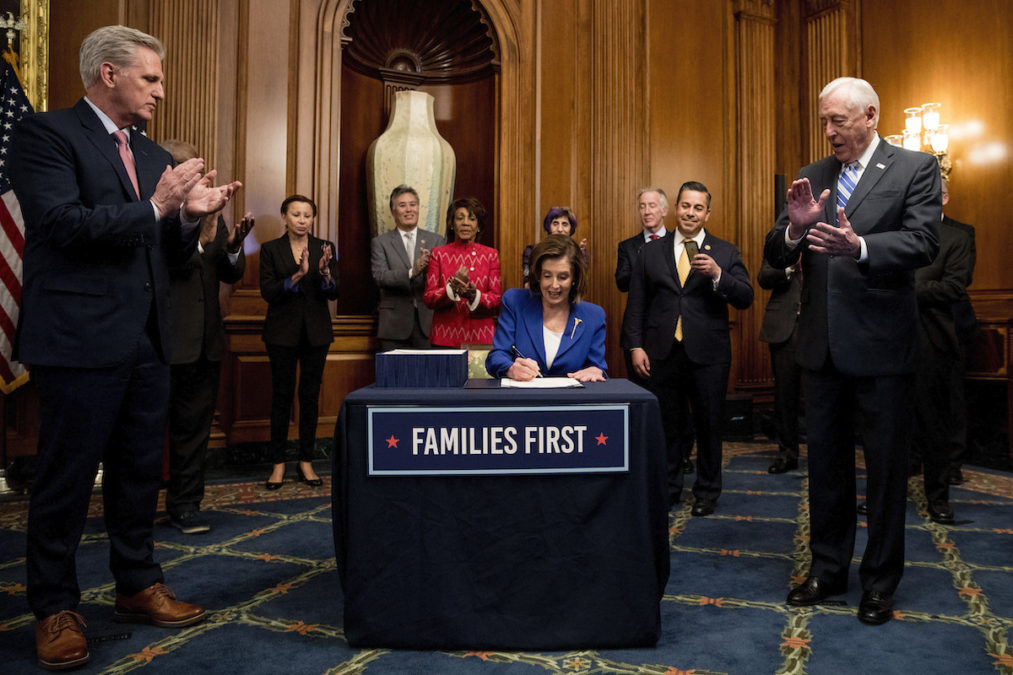 As front-line workers, from emergency room staff to grocery store clerks, face an elevated risk of contracting COVID-19, they have little in the way of regulatory protections to fall back on. Democrats’ efforts to move worker protections through Congress have so far been stymied, and a regulatory process launched by the Occupational Safety and Health Administration to mandate protections from infectious disease exposure was back-burnered by the Trump administration.

The effort to mandate public health protections for American workers has been in the works since at least 1983, during the early years of the AIDS epidemic, according to two former OSHA officials. But the only government standard currently in place deals with bloodborne pathogens such as HIV and hepatitis, a standard that was put in place in 1991.

In the years since, as American workers were exposed to other serious infectious diseases, from tuberculosis to Ebola and Zika, OSHA officials began the process of evaluating additional standards and in 2010 took the first steps toward rulemaking. But the process stalled, and no new standard was promulgated.

That inaction may now have terrible consequences as coronavirus infections surge in the United States.

Despite efforts by senior Democrats, all three coronavirus bills, including the $2.2 trillion stimulus bill known as the Coronavirus Aid, Relief and Economic Security Act – or the CARES Act – also failed to include any mandated worker protections.

House Education and Labor Committee Chairman Bobby Scott, D-Va., had inserted language into the House version of the second coronavirus bill, the Families First Coronavirus Response Act, that would have created a temporary emergency regulation within 30 days – to be replaced with a permanent rule – to protect health care employees and other workers deemed by the CDC and OSHA to be at elevated risk of exposure to respiratory illnesses, including COVID-19.

But after the House passed the bill, according to a spokesperson for the House Education and Labor Committee, the worker protection provision was removed during negotiations with Treasury Secretary Steve Mnuchin and Senate Republicans as the measure headed into the Senate.

House Democrats again introduced OSHA provisions in its version of the CARES Act – but those provisions, after negotiations with Mnuchin and Senate Majority Leader Mitch McConnell, were never added to the Senate version. McConnell’s office did not respond to requests for comment.

The change, according to congressional staffers, was largely due to lobbying efforts by the American Hospital Association, which spent more than $26 million on lobbying in 2019. The trade group fought similar regulation efforts under the Obama administration, congressional staffers and workers rights advocates recall. In comments on the provision to House Speaker Nancy Pelosi as well as in a March 12 action alert issued to the association’s member hospitals, the group argued that enforcement would be too costly for hospitals and that complying with a new standard amid a severe respirator shortage might limit hospitals’ ability to adequately provide care to sick patients.

In late January, a little over a week after the first U.S. COVID-19 case was confirmed, Scott sent a letter urging Labor Secretary Eugene Scalia to prioritize an OSHA infectious disease standard. He asked Scalia to consider issuing an emergency regulation to immediately protect workers from the coronavirus. Scott followed up with a second letter in March. It was another two weeks before Loren Sweatt, Scalia’s principal deputy assistant secretary, responded: “The CDC guidelines … are universally distributed, and public awareness of COVID-19 is high. … OSHA can best meet the needs of America’s workers by being able to rapidly respond in a flexible environment.”

Calls for comment to OSHA and the Department of Labor were not returned.

Scott, along with a growing list of House Democrats, introduced a separate bill March 9 that includes language almost identical to the scuttled worker protection standards in the Families First Act. A second House bill contains a similar provision that also aims to protect front-line health care workers, as well as others deemed at elevated risk by OSHA and the Centers for Disease Control and Prevention. Introduced by Rep. Nita Lowey of New York on March 23, that bill is also awaiting committee review.

“We’re concerned that self-employed workers, including the so-called gig economy workers who are frequently misclassified as independent contractors rather than employees, are excluded from coverage under OSHA and have few legal protections,” Scott said at a press briefing after passage of the CARES Act.

OSHA officials first got serious about developing an infectious disease standard in the wake of the H1N1 flu pandemic a decade ago. A formal regulatory effort was launched under the Obama administration in May 2010, when OSHA issued a formal request for information on exposure to infectious disease in the workplace and held a series of stakeholder meetings. A 2011 summary of the stakeholder responses indicated that there was widespread industry pushback, including from hospitals, and yet OSHA officials moved forward with developing proposed rules. Then in 2017, without a confirmed OSHA chief in place, the unfinished regulation was placed on the agency’s long-term agenda, where it has languished ever since.

Angelo Cucuzza, a former American Airlines employee who is now a senior staffer at the Transport Workers Union, said that regulatory failure has put subway, airline and even bikeshare workers represented by the union at risk.

“If I had a nickel for every time I heard the words, ‘We’re following CDC guidance. …’ ” he said, his voice trailing off. “The problem that we’re having in air, on rail or in transit is that there are no mandates out there.”

Cucuzza said he spent much of the last week in New York City, Jersey City and Philadelphia distributing surgical masks to union members who work for airlines and railroads. “We are trying desperately to procure wipes, gloves and hand sanitizer by next week,” he said.

He said roughly 95% of workers the union represents are deemed essential. “We have to start paying attention to the amount of front-line transit workers getting sick,” he said, arguing that as the coronavirus continues to spread, government officials either need to mandate new worker protections or start shutting down transportation systems.

Without a mandate, Cucuzza said, it’s unlikely most employers will voluntarily act to protect workers. This week, Washington state’s Department of Transportation announced that a ferry ticket seller had died of complications from COVID-19. Washington does not require all ferry workers to wear gloves, and the Department of Transportation doesn’t require any of its employees to wear masks.

As the number of COVID-19 cases continues to rise across the U.S., complaints that workplaces are failing to follow CDC guidance pour into OSHA. But because the CDC’s guidance is not a legal mandate, the agency has little ability to enforce compliance.

“We have received a number of complaints every day for the past several weeks about employers failing to follow the guidance,” one OSHA area office director wrote in an email to a worker advocate and obtained by Reveal from The Center for Investigative Reporting. “As an organization, all OSHA can do is contact an employer and send an advisory letter outlining the recommended protective measures.”

“As you know, the CDC has issued guidance to all of us to protect the spread of COVID-19 through social distancing and other protective measures such as hand washing and use of hand sanitizers in some instances,” the supervisor wrote.

OSHA’s failure to regulate and enforce is a source of deep frustration for worker advocates.

“There is no mandate to protect workers anywhere,” said Debbie Berkowitz, a former OSHA official who is now the worker health and safety program director for the National Employment Law Project. “There could have been a standard. No one realizes how weak worker safety protections really are.”

This story was edited by Narda Zacchino and Esther Kaplan and copy edited by Nikki Frick.

An earlier version of this story incorrectly identified the Families First Coronavirus Response Act as the House’s version of the CARES Act. It was a separate piece of legislation.

By Emily Schwing Reveal from The Center for Investigative Reporting April 4, 2020