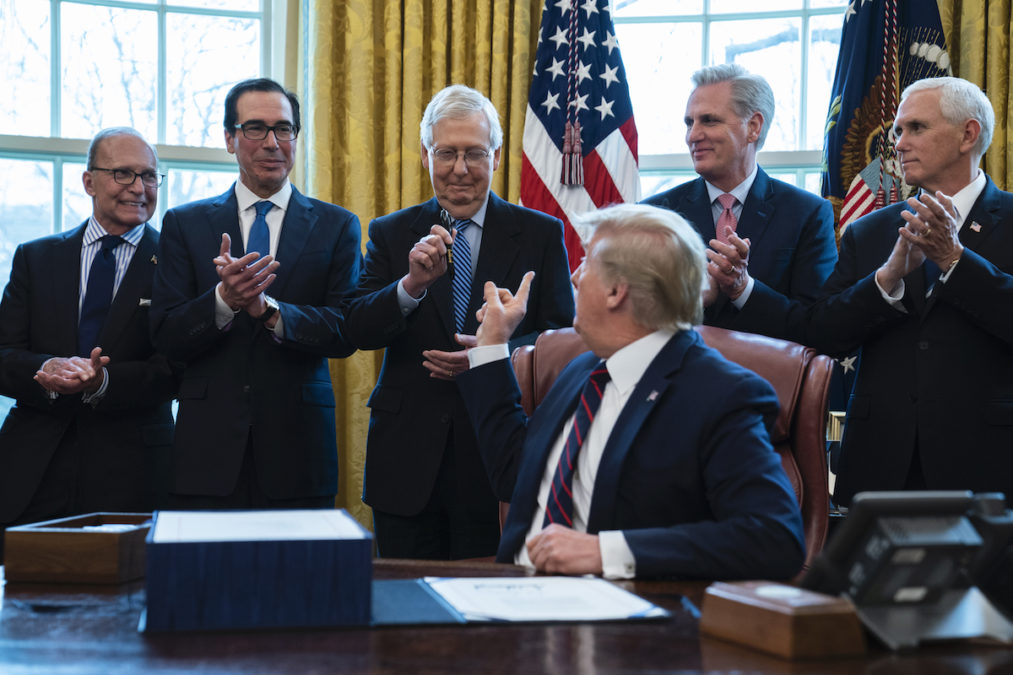 The bill, the largest stimulus ever enacted in the United States, greatly expands unemployment benefits, shores up small businesses and sends one-time checks to Americans making under $100,000 a year. It also includes unprecedented giveaways to corporate America, including a $170 billion tax break over 10 years for real estate investors and developers, such as Trump and presidential son-in-law Jared Kushner, and $500 billion in corporate bailout money to be administered by Treasury Secretary Steve Mnuchin, which Democrats have called a “slush fund.”

True to his word, Trump balked at any congressional oversight of the money. On Friday, just after signing the stimulus, the president issued a rare signing statement saying he would treat accountability provisions of the law as “not mandatory,” citing “constitutional concerns” over the separation of powers. A requirement that a special inspector general provide information to Congress without delay, he said, “is unreasonable.”

The signing statements came amid a series of actions by the president and his political appointees that, taken together, stack the economic deck in a way that protects financial and real estate interests from the economic wreckage of the COVID-19 pandemic, at the expense of Americans who are bearing the brunt of it.

The Federal Reserve’s March 23 decision to effectively bail out commercial real estate lenders is a case in point. The Fed announced that it would purchase large amounts of mortgage-backed securities in an effort to “support the flow of credit to households and businesses.” But the board’s decision to include commercial loans in its purchases would do little for ordinary households – and a lot for real estate speculators who provide capital to shopping malls and office towers. The Fed’s spending figure was breathtaking: $50 billion a day for a week.

The decision was a windfall for real estate developers such as Tom Barrack, a close Trump friend and Trump donor who chaired the president’s inauguration committee. The day before the Fed took action, Barrack tweeted for the first time in more than three years. In the tweet, he warned of a “liquidity crisis … alongside COVID-19’s spread” that could devastate one of his core businesses: commercial real estate.

Stock in Barrack’s company, Colony Capital, had plunged since the start of the COVID-19 pandemic, but shot up on news of the Federal Reserve’s announcement, ending last week up nearly 60%.

“It looks like the holders of these asset classes were saved in time,” said Sarah Bloom Raskin, a former Federal Reserve governor and deputy treasury secretary under President Barack Obama.

That same day, the Fed also announced it would start buying up corporate debt – putting the central bank on the hook for boomtime borrowing by the country’s largest corporations before their bonds collapsed to junk status.

“Many pockets of the market are being plugged up with ongoing Federal Reserve liquidity,” Raskin said, while millions of Americans are laid off and small businesses face collapse on a massive scale.

“Will households and small businesses be saved in time?” she said. “People waiting at home for checks, anxious, wondering if their checks will arrive before their bills become due, before they get sick, before they potentially lose their jobs or have their hours cut. And small businesses, too, must make decisions whether to apply for forgivable loans, whether such money can arrive in time to keep their businesses from ending.”

The week before, banking regulators from the Federal Reserve, Federal Deposit Insurance Corp. and Office of the Comptroller of the Currency had acted together to ease restrictions put in place in the wake of the 2008 financial crisis, opening the door for banks to continue to pay dividends to shareholders even when they have less cash on hand.

“This makes no sense,” tweeted Sheila Bair, who led the FDIC during the housing bust. “This is unfathomable,” she added, arguing that such payouts could “weaken banks’ ability to continue lending during the crisis.”

The decision also increases the chance that banks will eventually come to Congress to ask for a bailout, said Graham Steele, a former Senate banking committee staffer and director of the Corporations and Society Initiative at the Stanford Graduate School of Business. Steele pointed to a 2010 study by the Federal Reserve Bank of Boston, which found that if banks’ ability to pay dividends had been shut down earlier, they would have stockpiled substantial sums of money – enough, he said, to have reduced the price tag for the federal bank bailout in 2008 by half.

Even as they shored up America’s largest corporations, banks and real estate investors, Trump’s bank regulators also joined forces, citing the COVID-19 pandemic, to smooth the way for lenders to exploit the nation’s most financially vulnerable.

They did so without imposing any restrictions on high interest rates, late fees, or balloon payments. These practices, which blossomed after the 2008 crash with reports of interest rates of up to 300%, had been curtailed under the Obama administration after the Consumer Financial Protection Bureau found in 2013 that they “can trap consumers in debt.” Since taking office, Trump has significantly weakened the bureau, which was set up to protect consumers following the 2008 financial crisis.

“I don’t think there are a lot of people right now where a loan with a 70% interest rate and a balloon payment in two weeks would solve their problems,” Lauren Saunders, associate director of the National Consumer Law Center, told Reveal.

The Consumer Financial Protection Bureau responded to the COVID-19 crisis with another deregulatory action likely to harm consumers. On Thursday, the bureau granted financial institutions a reprieve on reporting data designed to track lending discrimination – which journalists, advocates and law enforcement could use to determine whether people of color with good credit are being disproportionately harmed as lending dries up during the pandemic.

Meantime, an array of planned deregulatory actions continue to move forward despite the unprecedented disruption of the pandemic – among them, the Trump administration’s plan to gut enforcement of the Community Reinvestment Act, a 42-year-old law to stop discriminatory redlining. Bryan Hubbard, a spokesperson for Comptroller of the Currency Joseph Otting, told Reveal in an email that the comment period on the proposed changes will still expire April 8 as scheduled.

Aaron Glantz is a senior reporter at Reveal and author of the book “Homewreckers: How a Gang of Wall Street Kingpins, Hedge Fund Magnates, Crooked Banks, and Vulture Capitalists Suckered Millions Out of Their Homes and Demolished the American Dream” (Custom House).

By Aaron Glantz Reveal from The Center for Investigative Reporting March 30, 2020