JOIN TODAY!
Behind the Smiles 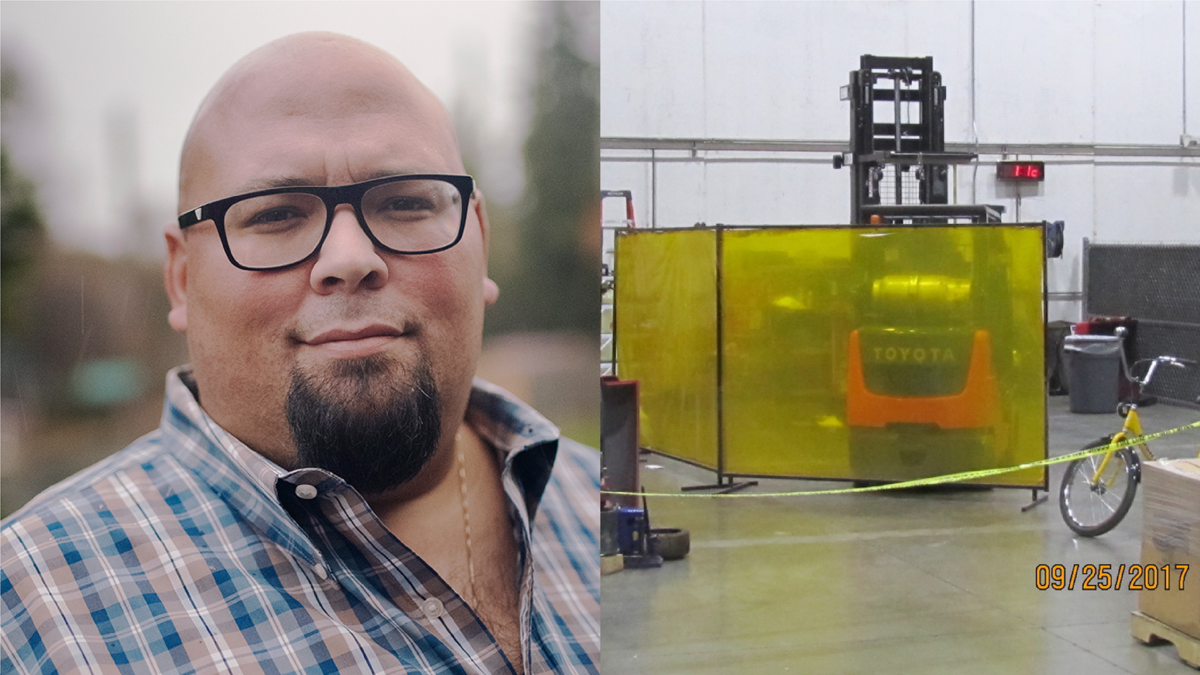 As a safety inspector for Indiana’s Occupational Safety and Health Administration, John Stallone (left) investigated the death of Amazon employee Phillip Lee Terry, who was crushed by a forklift. A photo taken as part of Indiana OSHA’s investigation shows the forklift involved in Terry’s death at an Amazon warehouse in Plainfield, Ind.

A new federal investigation has found that Indiana officials shouldn’t have exonerated Amazon after one of its warehouse workers was crushed by a forklift.

In the wake of 59-year-old Phillip Lee Terry’s death in an Amazon warehouse in September 2017, the Indiana Occupational Safety and Health Administration undertook an investigation, ultimately issuing four serious safety citations and a $28,000 fine. But Amazon appealed, blaming the accident on Terry, saying it was due to “employee misconduct” because he failed to follow safety protocols.

That appeals process unfolded just as Indiana Gov. Eric Holcomb was jockeying for Amazon’s second headquarters. Indiana OSHA accepted Amazon’s defense, Reveal from The Center for Investigative Reporting found, and quietly made the citations and fines go away.

The new federal investigation, detailed in an April 22 letter, bolsters Reveal’s investigation, finding that one of Indiana’s top safety officials improperly explained to Amazon how to get rid of the citations. The federal investigation also found that Indiana OSHA was not justified in deleting three of the four citations against Amazon, effectively erring in exonerating a company that was then worth almost a trillion dollars.

“This is a devastating report of significant failures by Indiana OSHA,” said Debbie Berkowitz, a former senior policy adviser at federal OSHA and director of the worker health and safety program at the National Employment Law Project, a worker advocacy group. “The lapses described in this report are major and reveal a state agency that is not carrying out its mission to assure employers provide safe conditions.”

Berkowitz called for federal OSHA to begin the process of taking over worker safety in Indiana, stripping the state of its ability to run its own program. Indiana is one of 21 states with federal permission to run their own workplace regulation programs overseeing private employers. But federal OSHA has repeatedly found problems with Indiana’s enforcement of worker safety, including in a 2017 review that found that Indiana OSHA dropped citations in workplace death cases without documented justification.

Last year, as part of a wide-ranging investigation into Amazon’s elevated injury rates and inadequate safety culture, Reveal told the behind-the-scenes story of how Indiana officials failed to hold Amazon accountable for Terry’s death. The former Indiana OSHA safety inspector who conducted the original investigation, John Stallone, alleged that top state officials – including Holcomb – pressured him to back off on the Amazon case so it wouldn’t jeopardize the state’s chances at the company’s headquarters deal. Holcomb denied that a meeting Stallone described ever took place.

After the story was published, Holcomb’s attorney sent a cease-and-desist letter to Reveal, demanding a retraction and calling Stallone “not credible.” Holcomb denied pressuring Stallone or even knowing about the Amazon case. Reveal and its publishing partners, The Indianapolis Star and The Atlantic, refused to issue a retraction; the Indiana Professional Chapter of the Society of Professional Journalists criticized Holcomb’s letter as “a threat to press freedom.”

Back in December 2017, Stallone complained about Indiana’s handling of the case to federal OSHA, but the agency declined to investigate. Two years later, after Reveal’s story appeared, Stallone filed another complaint, which led to the April report.

Indiana officials had said that following Amazon’s appeal, they could no longer substantiate the violations identified by Stallone’s investigation. The federal OSHA report rebuts that claim, finding that Amazon failed to prove its defense.

Indiana OSHA should “ensure that adequate evidence has been submitted prior to deleting safe orders,” the letter says.

State officials are now required to respond to the federal agency’s recommendations and may request a review if they disagree with the findings.

“We have received the report and are evaluating it to determine our response,” Indiana Labor Department spokesperson Stephanie McFarland said in an email. “We will share our remarks through federal OSHA’s proper channels and established process.” The governor’s office referred Reveal to McFarland’s statement.

“For me, there’s some vindication,” Stallone said of the federal findings. Most importantly, he said, the report takes the blame off the worker who died. “It was a terrible accident and it’s not his fault,” he said.

Stallone’s complaint went beyond the handling of Terry’s death. The review found merit in two other allegations. For example, federal OSHA found that Indiana OSHA had failed to conduct targeted investigations of employers based on national safety priorities and failed to adequately investigate a complaint that workers were getting sick from poor air quality.

In the Amazon case, federal OSHA reviewed the circumstances surrounding the death of Terry, who was sent to do maintenance on a forklift and had been working underneath the machine’s forks and metal platform without propping them up with a pole. He died when the 1,200-pound piece of equipment dropped down on him. His body wasn’t discovered for nearly two hours.

Stallone’s complaint accused Indiana OSHA Director Julie Alexander of inappropriately helping Amazon fight the citations by detailing, during a routine conference call with company officials, how the company could blame the accident on employee misconduct by Terry.

The federal OSHA investigation agreed with Stallone that this guidance was improper. While investigators did not find evidence that there was an “intentional or premeditated effort to ‘coach’ Amazon,” they found that Alexander raised the possible defense unprompted and before the merits of the violations had been discussed, calling it “unnecessary and premature.” Indiana OSHA, the report said, should review its procedures to make sure that defenses such as employee misconduct “are not discussed unless raised as a defense by the employer.”

Alexander, however, had done more than simply raise the defense with Amazon, according to the call that Stallone secretly recorded, which is legal in Indiana, and shared with Reveal.

In the recording, Alexander also suggested that Amazon could partner with her agency as a “leader in safety” and said, “We sometimes like to consider grouping citations to lower the penalty amounts.” After the call, she told Stallone, “I hope you don’t take it personally if we have to manipulate your citations.”

Alexander also speculated out loud after the call that the deceased worker “was probably on drugs or something.” A coroner’s report showed he was not.

Amazon eventually adopted the defense that Alexander had raised and blamed Terry for his own death.

The subsequent agreement wiping away the citations, signed by Alexander and Amazon safety director Mike Stone, says Amazon “met all of the required elements” of an employee misconduct defense. The federal investigation, however, found that the company did not. For example, Amazon didn’t establish that a documented and specific safety procedure had been developed for that task.

The report did say Indiana was justified in deleting one citation, which had accused the company of not providing adequate training. During the appeals process, Amazon submitted a surveillance video that it said shows Terry training another employee to do the same task correctly. The federal probe said two of three employees interviewed as part of the inspection supported Amazon’s claim that workers were trained to prop up the forklift.

It doesn’t note, however, that the employee who said otherwise was the one who was supposed to have trained Terry on the machine. That co-worker said in a signed statement that Amazon’s training was insufficient: “There’s no training, there’s no safety, it’s ‘Get ’er done.’”

The federal report calls on Indiana OSHA to change its practices going forward. Federal OSHA will monitor the state’s corrective actions during regularly scheduled meetings, according to a federal agency spokesperson.

“I’d like to see it have some results,” said Terry’s son, Zach, “where they have to publicly apologize or people are held accountable.”

This story was edited by Andrew Donohue and Esther Kaplan and copy edited by Nikki Frick.
Will Evans can be reached at wevans@revealnews.org. Follow him on Twitter: @willCIR.

By Will Evans Reveal from The Center for Investigative Reporting May 4, 2020