JOIN TODAY!
The Secrets of the Drought 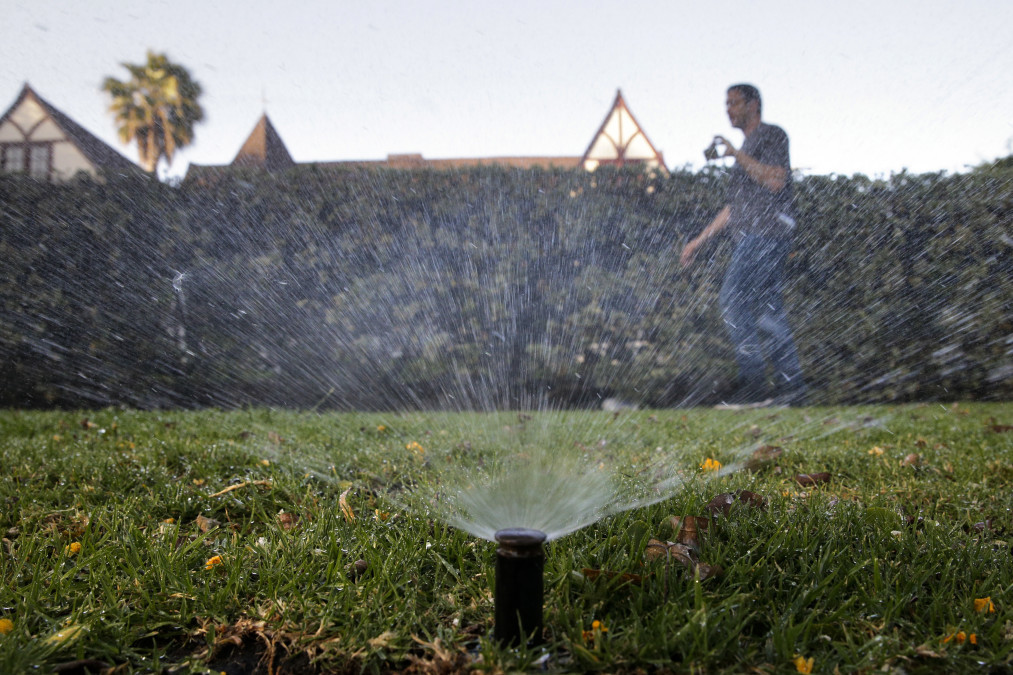 In this Friday, June 5, 2015, photo, Tony Corcoran records sprinklers watering the lawn in front of a house in Beverly Hills, Calif. Corcoran is one of several people who spend their spare time these days canvassing the tony communities of Beverly Hills, West Hollywood and elsewhere, looking for people wasting water during the worst California drought in recent memory. (AP Photo/Jae C. Hong)

Los Angeles’ 100 biggest residential water customers cut back their use after Reveal from The Center for Investigative Reporting exposed profligate water waste in some of the city’s most exclusive neighborhoods.

But the top 100 users still pumped enough water during the fifth year of California’s crippling drought to supply the needs of 2,800 ordinary households, records show.

L.A.’s mega-users live in Bel Air, Beverly Hills and other mansion-studded, lushly landscaped neighborhoods on the city’s ultraexpensive west side, according to utility records obtained by Reveal.

Together, these 100 homeowners pumped an astonishing 371 million gallons of water in the 12 months ending in April 2016,  the records show.

Still, even at this reduced level, the top 100 pumped enough water last year to flood the Los Angeles Memorial Coliseum to a depth of 63 feet – or to provide a year’s water supply to more than 8,100 Californians, according to a state estimate.

The city won’t identify the big users by name, citing privacy concerns. But in a statement, the Los Angeles Department of Water and Power said it was making headway in persuading city’s mega-users to conserve.

One measure of progress, according to the department: 45 ratepayers who were among the top 100 in 2014-15 fell off the new list because they had saved so much water.

The city “is encouraged by the drop in water use by our largest residential water users, but we continue to encourage them to do more,” the statement said.

This month, California has been battered by a series of winter storms, finally breaking the drought in much of the state. But water experts warn that conservation remains critically important in Southern California, which is still in the grips of severe drought, according to the U.S. Drought Monitor.

City water officials won’t say who these customers are but did release their ZIP codes. Some customers were not billed annually, so their use was adjusted to reflect an annualized rate.

Where the top 100 water users live

Two-thirds of the top 100 residential customers of the Los Angeles Department of Water and Power live in Beverly Hills and Bel Air/Beverly Glen. Data is from March 30, 2015, to April 1, 2016.

Tracy Quinn, a water policy analyst for the Natural Resources Defense Council in Santa Monica, said it was commendable that L.A.’s 100 mega-users had geared back.

But she noted that the mega-users still were using “an incredible amount of water, even at the reduced level.”

The issue of water waste among L.A.’s wealthy flared in 2015 in response to Reveal’s Wet Prince of Bel Air investigation.

The story reported that many of the biggest residential customers in California were clustered in exclusive L.A. neighborhoods, each pumping at least 2.8 million gallons per year..

The celebrity enclave of Bel Air was home to four of the five biggest known water users in the state, including the so-called Wet Prince, a customer who had pumped 11.8 million gallons in a single year. The city declined to identify the customer by name.

While water flowed to the wealthy, the city mounted an aggressive campaign to get Angelenos to meet a city conservation goal of 20 percent savings over 2014 levels. Homeowners were hit with hefty fines for infractions such as watering their lawns on the wrong day of the week or letting water run onto the sidewalk.

In the outcry that followed the story, the state Legislature passed a law imposing fines for excessive water use during future drought emergencies.

Local lawmakers urged a crackdown, but the Department of Water and Power reported that “most (if not all) of the water abusers were unaware of their water use” and had agreed to conserve, an aide to Councilman Paul Koretz, who represents Bel Air, wrote in an email to Reveal.

The department said it began a program of “proactive outreach” to mega-users, contacting them by mail and in person to guide them to save water. In addition, the city adopted a new water rate structure that increased prices for high-end users.

The top tier of the new rates can push a mega-user’s annual water bill to more than $100,000. But for wealthy homeowners with large, heavily landscaped estates, the threat of whopping water bills seems only a limited incentive to conserve.

In 2015-2016, the city’s biggest water user was a Bel Air resident who pumped a projected 9.8 million gallons, according to the city. That’s enough water for 75 households.

It’s not clear whether this is the same as the Wet Prince, the unnamed ratepayer who pumped 11.8 million gallons the year before. If it’s the same person, this customer cut his or her water use by 17 percent – and still used nearly 2 million gallons more than the city’s second-biggest water user.

In 2016, after the city refused to name its big customers, Reveal used multispectral aerial photographs and some sophisticated analytic tools to estimate water use on big, heavily landscaped estates in Bel Air.

That analysis found that billionaire Jerrold Perenchio, former CEO of the Univision Spanish-language television network and owner of a chateau known as the “Beverly Hillbillies” mansion, was using between 6.1 million and 12.3 million gallons of water per year to irrigate his 13-acre estate. Satellite photos showed that some of Perenchio’s lawns had turned brown as summer progressed, suggesting he was cutting back on irrigation. He declined comment at the time.

In all, 24 ratepayers in Bel Air ranked among the city’s top 100 users in 2016, including three of the top five. On average, these Bel Air mega-users pumped 3.4 million gallons apiece.

In some neighborhoods, there were more mega-users than last year. For example, in 2015, one West Hollywood ratepayer was among the top 100 users: This customer pumped 3.4 million gallons, enough for 25 households.

But in 2016, there were four West Hollywood mega-users, averaging 2.9 million gallons apiece.

The records also suggested that multimillion-gallon savings had been achieved by individual ratepayers in Cypress Park, Van Nuys and Playa del Rey.

While not identifying the ratepayers, the city’s Department of Water and Power offered other anecdotes of dramatic water savings. One of last year’s mega-users achieved a 35 percent savings after being contacted by the city, and another decided to tear out a 4,300-square-foot lawn, the department said. Yet another unnamed mega-user was said to have discovered a “silent on-site leak” that was responsible for significant waste.

Despite the recent rains, state water officials caution that it would take years of wet winters to bring California back from the drought, and Gov. Jerry Brown is pushing a package of long-term regulations to “make water conservation a way of life.”

Meanwhile, experts fear the heavy rains might lead to backsliding – by mega-users and ordinary people alike.

“We know that we are in the longest and most intense drought in modern history,” said Quinn, the water policy analyst. “But we have this short-term memory loss. It starts to rain, and we forget there ever was a drought.”

By Lance Williams Reveal from The Center for Investigative Reporting January 18, 2017