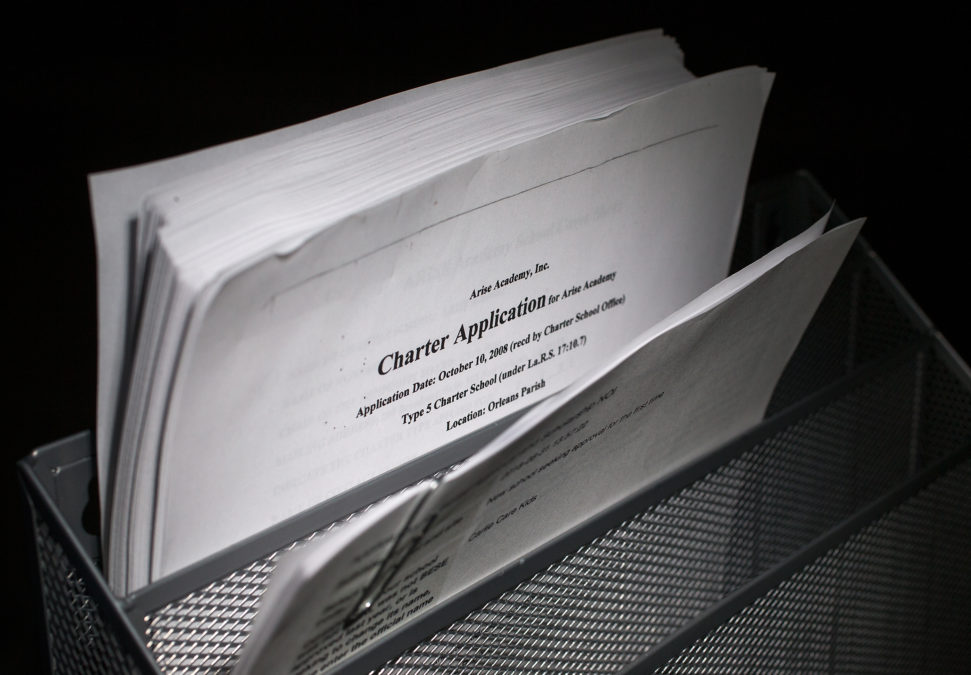 This photo comparison shows the thick application Louisiana education officials require from a typical charter school applicant, and the less-than-20 pages of information they ask from private schools seeking vouchers.

This story was produced by FOX8 WVUE, NOLA.com | The Times-Picayune and WWNO New Orleans Public Radio as part of Reveal’s Local Labs initiative, which supports lasting investigative reporting collaborations in communities across the United States.

Since 2007, Carlie Care Kids has run a child care out of a couple of nondescript converted townhouses in Terrytown, Louisiana. Now it’s gearing up for a big switch: This fall it will become an elementary school for up to 39 kindergarteners and first graders.

It will be done with the help of taxpayers. The school even advertises itself to parents as “free kindergarten.” Yet, like they do for dozens other private schools in Louisiana, state education officials asked Carlie Care to do very little to become eligible to take students paying with public vouchers.

Its owners basically had to fill a 16-page document with straightforward questions, many satisfied with yes/no answers. By contrast, when Arise Academy in New Orleans recently applied to become a charter school, it had to prepare a 174-page packet with questions about financial soundness, curriculum and teacher’s qualifications that demanded encyclopedic answers.

The discrepancy is by design. While public schools must meet rigorous standards and charters must face serious state scrutiny before being approved, the dozens of private schools in the Louisiana Scholarship Program faced barely a review from education officials in order to get public money, according to an investigation by NOLA.com | The Times-Picayune, WVUE Fox 8 News, WWNO and Reveal from The Center for Investigative Reporting. Voucher-program schools and charters both offer the same promise: They give parents a publicly funded education, outside of the traditional public school system.

The lack of scrutiny for private voucher schools is one of the reasons for problems with the scholarship program, according to Andre Perry, a Brookings Institution fellow who holds a doctorate in education policy and leadership and formerly led the University of New Orleans Charter School Network.

“This is shameful,” Perry said when presented with the voucher application. “If you’re not vetting schools on the front end, then you’re really not trying to establish quality on the back end.”

John White, the state’s education superintendent, declined multiple requests for an interview about the voucher program.

Ann Duplessis, a former state senator from New Orleans who was one of the architects of the voucher program, said questions about a private school’s curriculum and teaching methods should be part of the application process. She also said voucher schools that fail to perform academically can be sanctioned by the state.

Gov. Bobby Jindal expanded the Louisiana Scholarship Program in 2012 with the promise of providing great education to low-income students. The $40 million-a-year program allows parents to remove their children from struggling and middling public schools and instead use a public subsidy to enroll in a participating private school.

The news organizations’ investigation found that the program has failed to live up to its billing. For the 2017-18 school year, there were around 6,900 voucher students enrolled in 122 private and parochial schools across the state, with the heaviest concentration – 36 percent – in New Orleans. The investigation by the news organizations found that year two-thirds of all voucher students attended school with a D or F grade.

Not a single school in the voucher program received an A or B grade in the 2017-18 school year, according to the analysis. Three received a C. Of the remaining schools, 19 got a D and 15 got an F, based on the Louisiana Department of Education rating system. The scores are based only on testing of voucher students – student who are not on vouchers are not tested.

In filling out the forms, Carlie Care Kids merely did what voucher program officials asked them to do. In a statement Thursday, owner and director Monique Rouege said the school is one of the most successful and highest-rated childhood centers in Louisiana.

“After extensive research, we have decided to expand our services by offering a Kindergarten program in the Fall of 2019 as a way to ensure school readiness for our students. We believe that beginning the primary school process in a smaller, more intimate setting is a better way to transition children as opposed to thrusting them in larger, overcrowded settings,” Rouege’s statement said.

The form, for example, asks: “What standards for student learning did the school use to design its curriculum?” Carlie Care’s answer took all of two sentences: “Currently, Carlie Care Kids uses Frog Street Curriculum & Programs for our pre-school children. For the 2019-2020 school year, when we implement our kindergarten and 1st grade programs, we will use Common Core Standards for those grades.” That pales in comparison to the scrutiny charter schools face before they can take students, a close examination that accountability advocates have championed as a way to shield kids from bad operators.

The charter process demands detailed information on the educational program and curriculum of the applying school – data that in the case of Arise Academy required 40 pages. The voucher application asks so little in that topic that it took Carlie Care less than one page to respond.

Those wanting to run a charter school must provide in-depth details on instruction methods, philosophy and a vision for the future of the school. It must explain in detail professional development strategies, financial plans and accountability goals. Biographies for school leaders must dig deep into their qualifications.

Carlie Care Kids’ documentation for the voucher program, which state officials said was approved by the Board of Elementary and Secondary Education in January, did not include such detailed information.

State education leaders must tour would-be charter schools before approving them. But the law that created the voucher program and state policies for it, do not require site visits for voucher program participation.

How is your child’s voucher school performing?

Many schools don’t have letter grades because Louisiana only reports test scores for schools with at least 10 scholarship students per grade level. But most students in the program are concentrated in schools that did report. We calculated letter grades based on each school’s SCI score, which the Louisiana Department of Education says is comparable to the scores used to calculate public school letter grades.

Since Jindal expanded the program in 2012, every private or parochial school that has sought state permission to take vouchers has gotten it, according to the education department. Even the state’s own documents explaining the process to would be participants say schools do not apply for the voucher program; they notify the education department of their intent to participate.

“We should hold (voucher) schools to the same standards,” Koppel said.

Perry says the discrepancy between the process for charters and voucher schools is one of the major flaws with the program. He said private schools seeking to accept voucher students should face the same scrutiny as charter schools, the expansion of which were also part of the sweeping overhaul of primary and secondary education put in place seven years ago.

Perry spent 13 years in New Orleans as education leader and is the father of two children who attended private schools in the city. A David M. Rubenstein Fellow in the Metropolitan Policy Program at Brookings, his research focuses primarily on race and structural inequality, education and economic inclusion. He founded the College of Urban Education at Davenport University in Grand Rapids, Michigan, and was an associate professor of educational leadership at the University of New Orleans, serving as CEO of the Capital One-University of New Orleans Charter Network.

Having participated in completing charter applications for two schools in New Orleans, Perry said it can take up to a year to prepare the documentation. He compared it to writing a book.

“You have to demonstrate financial fitness, educational fitness. You have to show the capacity to teach, to hire people … all of those things,” Perry said. “You go through the rigors because kids are worth it.”

Of the voucher schools, he added: “If they’re not going through that same type of application process and it’s not made public, we’re really putting students at risk.”

By Kim Chatelain, Lee Zurik and Jess Clark Reveal from The Center for Investigative Reporting May 9, 2019