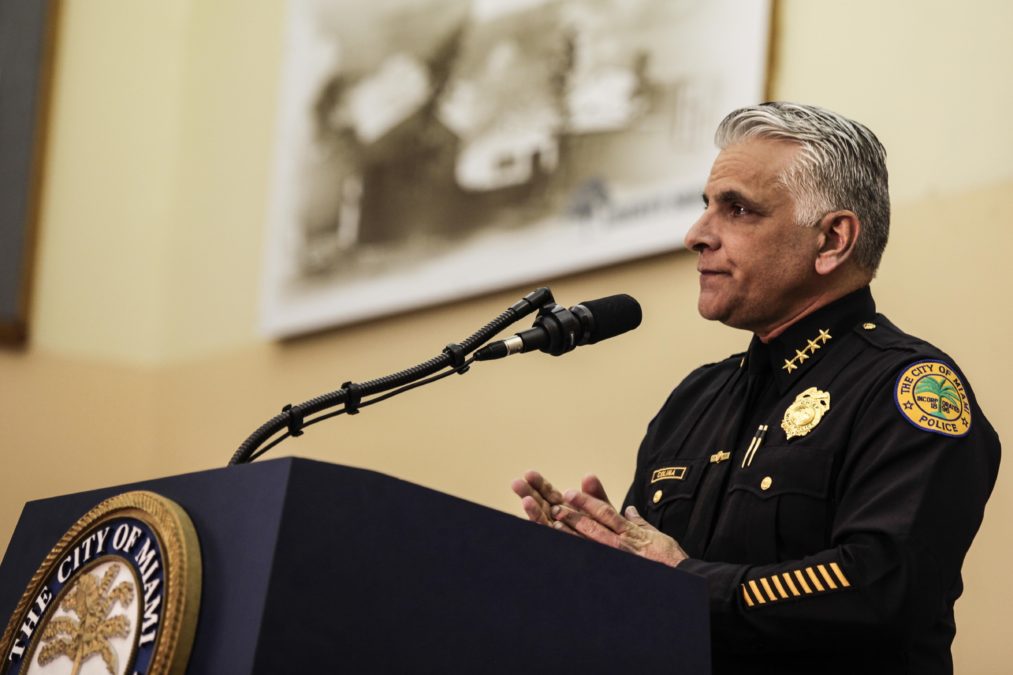 Miami Police Chief Jorge Colina had said he would look into how his agency handles U visas following Reveal’s reporting.

Credit: Courtesy of the Miami Herald

The Miami Police Department has enacted changes to how it treats immigrant victims of crime in response to an investigation by Reveal from The Center for Investigative Reporting. The story found that dozens of law enforcement agencies across the country routinely undermine visa protections for immigrants.

Miami, like other departments serving large immigrant populations, had created barriers that were never envisioned when Congress created the U visa program 20 years ago to improve trust between police and the immigrant communities they serve.

Maj. Antonio Diaz, who leads the criminal investigations section, said Miami police have changed their rules to bring the department in line with Congress’ intention for the program. The department will vouch for all victims who are cooperative with investigators – a prerequisite for beginning the U visa application process – and no longer will consider whether an arrest was made or a suspect was identified before supporting a visa application, Diaz said.

“We want to try to encourage as many victims to come forward. When they are a victim of a crime, they need to know we’re going to help,” he said. “We’re not going to be an obstacle.”

The policy update was welcome news for immigration lawyers in South Florida who struggled for years to obtain law enforcement certifications for victims within Miami city limits.

“We are relieved that the location of victimization in Miami-Dade County will no longer determine whether a victim can access humanitarian protections,” said Michelle Ortiz, deputy director of the legal nonprofit Americans for Immigrant Justice.

Shortly after Reveal’s investigation was published, Ortiz said the nonprofit received its first certification approval from Miami police in more than a year. “Our clients will no longer remain unprotected solely because of their ZIP code,” she added.

The investigation found that police and prosecutors nationwide regularly stonewall victims from gaining protections under the U visa, which grants victims temporary status.

In order to apply, victims need the investigating agency to sign a certification that confirms they’re a victim of a violent crime and that they were helpful to detectives. But an analysis of policies from more than 100 agencies serving large immigrant communities found that nearly 1 of every 4 create barriers never envisioned under the U visa program.

The problem was particularly acute in Miami. Officials there certified only 27 cases out of the 235 requests received between 2016 and 2018. Reveal found that the agency regularly denied requests from victims with unsolved cases – even though U visa guidelines state that agencies do not have to consider whether a case resulted in an arrest.

Miami Police Chief Jorge Colina acknowledged in October that his agency had a low certification-approval rate and said he would review his department’s certification process. Diaz said the department began closely following federal guidelines this month following that review and he expects a high volume of certification requests will be signed in the future.

Scores of other departments, from border communities in Texas to some of New York’s biggest cities, continue to erect significant barriers for immigrant victims of crime. The U visa is meant to eliminate immigrants’ fears that if they interact with the government, they might get deported.

“A policy change is the first step, but there’s other things that they can do to make it more accessible,” said Maya Ibars, who worked at Catholic Legal Services in Miami until recently taking a job with California-based Al Otro Lado.

She said she would like to see Miami police create a departmental order that explicitly states the agency’s new guidelines. Within such a large agency, totaling 1,371 sworn personnel, unwritten changes could potentially fall through the cracks, she said.

Ibars also recommended that the city’s police department create an online portal for U visa requests; currently, the department accepts requests only via U.S. mail. The Miami-Dade County Police Department, for instance, allows victims and their lawyers to submit requests on its website.

Among Ibars’ Miami clients was Nataly Alcantara, who was the victim of a home invasion robbery in November 2014. Two armed women broke into her duplex apartment, and one of the suspects pointed a gun at Alcantara’s children. After the thieves ran off with $300 in cash and the family’s phones, Alcantara called police from a roommate’s cellphone.

Police reports show that she and her partner met with police at least three times, answered officers’ questions and reviewed mugshots. Alcantara also called her stolen cellphone the day after the robbery. When someone answered, she alerted police, who were able to use the information to track down one suspect.

As the case eventually was closed without an arrest, Miami police declined to sign Alcantara’s U visa certification.

Colina said in October that he would look into Alcantara’s certification denial. When asked last week whether her case was revisited, Diaz said it didn’t come up during meetings but added that he would follow up with the chief. Ibars said she plans to refile Alcantara’s case.

Florida state Sen. Annette Taddeo, a Miami-Dade County Democrat, said she would introduce legislation this session to force all Florida law enforcement agencies to follow the same standards for handling these kinds of cases. Besides Miami, Reveal identified at least eight other Florida agencies that fail to follow federal guidelines. The Polk County Sheriff’s Office, for instance, didn’t sign a single certification request between 2016 and 2018.

Eleven other states have passed U visa certification statutes. Departments in California and Nevada, for example, are required to certify cases within 90 days and follow the federal criteria. Other laws are broader. In Connecticut and Delaware, the law instructs agencies only to assign an officer to review requests.

A statewide mandate in Florida likely would face strong opposition from the Republican-controlled state Legislature, which passed a law last year that requires local law enforcement to cooperate with U.S. Immigration and Customs Enforcement.

The bill was signed into law by Gov. Ron DeSantis, a Republican, but Democrats succeeded in including an amendment that protects crime victims and witnesses who come forward to police from being reported to ICE.

“One of our biggest fears always was that Senate Bill 168 would undermine the U visa system by pushing people further into the shadows,” she said. “It makes no one more safe, and it’s absolutely motivated by a political agenda that is racially fueled and based on fear mongering.”

This story was edited by Andrew Donohue and Esther Kaplan and copy edited by Nikki Frick.

By Laura C. Morel Reveal from The Center for Investigative Reporting January 24, 2020