Neglected housing project to be emptied within 6 months, officials say 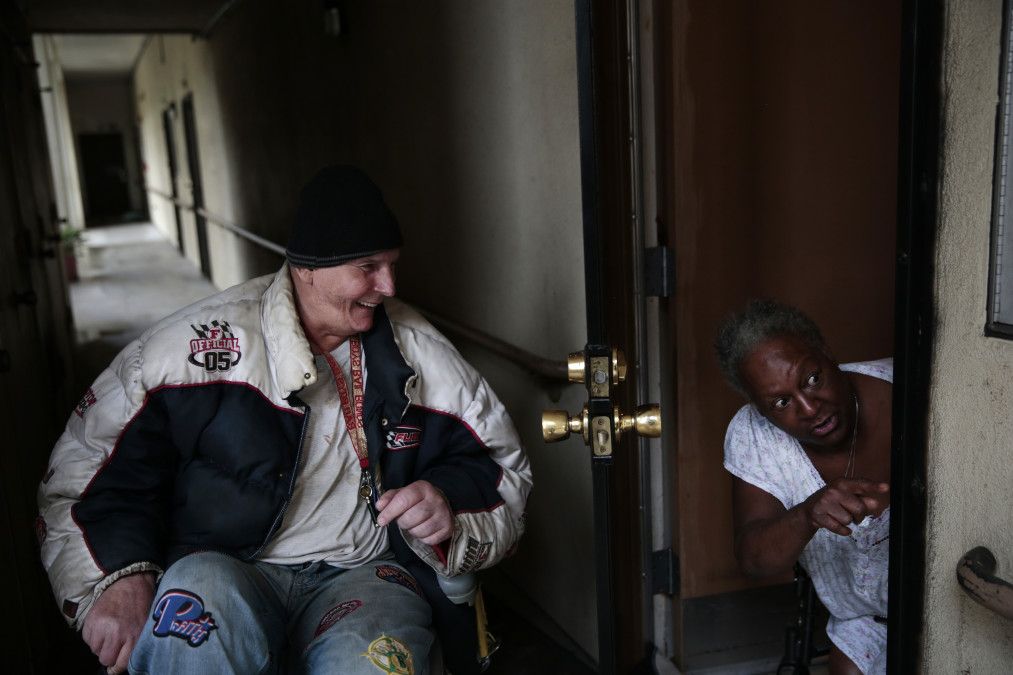 Everett Dennis Lewis, 62, laughs with friend Rhonda Marshall, 59, on Friday at the Hacienda public housing complex in Richmond, Calif. “I’m so excited to get out of here,” Marshall said.

RICHMOND, Calif. – City and federal officials gathered in the bare-bones recreation room of the city’s worst public housing complex this afternoon to promise that residents will be out within six months and be able to move back into fully renovated apartments within two years. Rhonda Marshall’s belongings have been packed in moving boxes for almost a year as she anticipated a voucher allowing her to relocate from the neglected Hacienda public housing complex. Credit: Ramin Rahimian for Reveal

Down the hallway in the Hacienda housing complex, six-year resident Rhonda Marshall was among those ready to go.

She packed her bags almost a year ago, just after city officials declared the 150-unit complex uninhabitable. Cardboard boxes holding her clothes, plates and personal belongings are stacked in the corner of her bedroom. The only things not packed: a few plates and her bed – which she had moved to her living room to avoid mold in her bedroom.

At today’s news conference, Richmond Mayor Tom Butt said his office, along with U.S. Rep. Mark DeSaulnier, a Democrat with an office in Richmond, and the U.S. Department of Housing and Urban Development had launched a “full court press” to secure the $1 million in federal funding needed to move Hacienda residents. They said residents, many of whom are elderly and disabled, will be given Section 8 housing vouchers next week, along with assistance to help them find housing on the private market.

“The reason this was able to happen was simply teamwork,” Butt said. “We are so happy that we had success, and from now on, I hope we have nothing but good news.”

“Today is a very happy day,” Jones said. “But it will be even happier when the last tenant is moved out.”

For years, residents like Geneva Eaton have been complaining about their desperate struggles with mice, mold and mildew. Last year, CIR exposed severe roof leaks and chronic maintenance issues that caused the building to be nicknamed the “Haci-hellhole.” Half of the apartments in Hacienda were infested with roaches and almost a fifth had mold, according to the most recent inspection.

“I’m happy to be leaving,” Eaton said. “But we’ve been suffering here in filth for years.”

Trying to convince HUD that Hacienda was beyond repair has been a multiyear challenge, according to Jones. In 2011, the housing authority tried but failed to secure funding to move residents out. But this time, he said media attention and the work of the city and DeSaulnier persuaded HUD to fund the move. The agency approved the renovation plan for Hacienda in January and agreed to provide housing vouchers earlier this week. DeSaulnier said he and Butt met with HUD officials in Washington earlier this week to insist that moving Hacienda residents should be a top priority.

“We were expecting a tough meeting,” DeSaulnier said. “But it was very productive. I’m thrilled for the Richmond residents, and I’m sorry that they’ve had to go through this. HUD got this right.”

The housing authority will be helping residents with the logistics of finding housing in the coming months, along with Autotemp Inc., an Oakland relocation consultant hired by the city in June.

It will probably take four to six months to move about 100 residents out of the Hacienda housing project, depending on the availability of replacement housing, according to a timeline by Autotemp.

The consultants will interview all residents, study the rental market and what housing is available, and put together a relocation plan for city approval. That process, the consultant said, typically takes about two and a half months.

“What we do is work with each household to identify relocation housing and assist them with the move,” said David Richman, president of Autotemp. “I’d like to believe that once we start the interviews, if someone wants to move out immediately, we can begin helping them.”

Mercy Housing, a nonprofit developer, will be in charge of the $19 million renovation of Hacienda once residents have left. The improvement plan is being paid for with a mix of low-incoming housing tax credits and project-based Section 8 assistance.

The renovation is estimated to take 18 months to two years. Hacienda still will provide affordable housing and current residents will be given priority.

Rommel Fuller, 55, who has lived in Hacienda for about five years, said he wouldn’t be coming back. But like others, he’s nervous about the future.

“In my heart, I’m ready to move,” Fuller said. “It’s just a matter of finding a place to go. We don’t know how anything is going to turn out. It’s scary.”

Fuller is no stranger to moving – he was moved out of his first apartment in Hacienda after water leaks caused his ceiling to buckle and puddles to pool on his floor. He was moved to the sixth floor, but severe roof leaks there forced the entire floor to be evacuated. And in Fuller’s last home in Hacienda, toxic black mold eventually overran his apartment and forced him to pack up his things once again.

Now Fuller is weighing where to use his Section 8 voucher – his two top choices are Vallejo or Hawaii, but his wish list is a tough one to fill: He wants to pay the $215 a month in rent that he’s paying now, and he wants a safe neighborhood.

“I don’t want to end up in another place like this,” he said.

Neglected housing project to be emptied within 6 months, officials say

By Amy Julia Harris Reveal from The Center for Investigative Reporting February 6, 2015