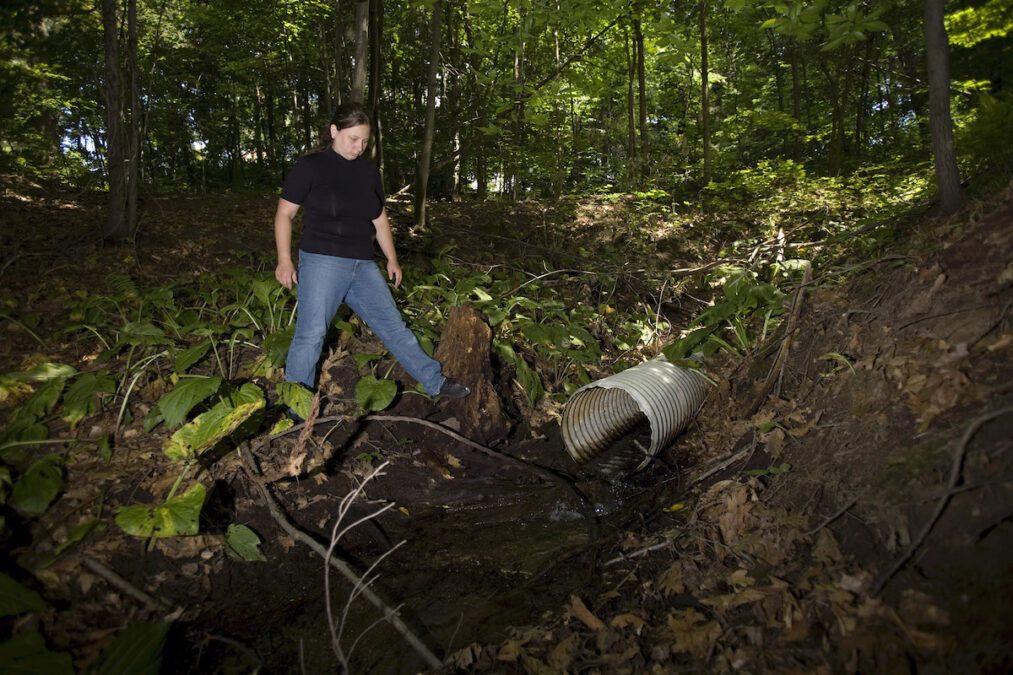 Jody Delong stands next to a small contaminated stream below her home in Fort Edward, New York, in 2007. She and her husband purchased their property in 1990 and were told by General Electric in 2005 of the toxic TCE vapor contamination from its nearby transformer and capacitor factory.

Todd Kaminsky, chairman of the New York State Senate’s Environmental Conservation Committee, was driving to a political event in February when a radio segment caught his attention. It was a Reveal story about a toxic chemical solvent – trichloroethylene, or TCE – that can cause a range of cancers and immune disorders and deform fetal hearts.

Kaminsky, a Democrat from Long Island, had long been aware of the dangerous chemical, widely used to remove grease at dry cleaners, military bases and manufacturing facilities. After the Trump administration had scuttled TCE restrictions proposed under President Barack Obama, he’d introduced a bill in November to put similar restrictions in place in New York. But it was just one of more than 100 bills he’d introduced in the current legislative year, according to his staff.

Kaminsky found Reveal’s story “so powerful” that he decided to make a TCE ban the top priority of the session, he told Reveal from The Center for Investigative Reporting. “This is very rare where the two things meet,” he recalled thinking, “where you see a need and you have the power to do something about it.”

Late last month, both chambers of the State Legislature passed the bill. A spokesperson for Gov. Andrew Cuomo said he will review it.

Not long after the bill was introduced, chemical companies began urging New York legislators not to ban TCE, but to wait for federal action based on a risk evaluation underway at the Environmental Protection Agency. Reveal reported in February that the White House had directed the EPA to rewrite its evaluation of TCE, downplaying the risks. A draft evaluation by EPA scientists, years in the making, had set unsafe exposure levels based on the risk to fetal hearts from even trace amounts of TCE. After White House edits, the draft swapped in a different benchmark, based on the higher exposure levels at which TCE can trigger immunosuppression.

The potential impact on any future regulations could be enormous. TCE is still used widely to take grease off everything from silk blouses to missiles. Dry cleaners use it. So do automobile brake shops, small metal parts manufacturers and refineries. It’s used in refrigerants and glues for hair extensions.

Scientists, including some on the EPA’s Science Advisory Committee on Chemicals, have called on the EPA to probe Reveal’s report that the White House interfered in its scientific assessment. “The allegation should be investigated, as a mere suggestion that EPA changed the earlier scientific evaluation, based on pressures from non-scientific sources, cast significant doubt to the scientific integrity that EPA has worked so hard to maintain,” some scientists told the EPA during a meeting to peer-review the draft assessment’s findings.

During a U.S. Senate hearing in June, Sen. Maria Cantwell, D-Wash., questioned White House official Nancy Beck, a former chemical industry lobbyist, about political interference in the TCE risk evaluation. Cantwell noted that “the White House overruled EPA’s own scientists” and pressed Beck about her role: “So, Dr. Beck, yes or no, were you involved or responsible?”

Beck refused to answer, saying behind-the-scenes input from the White House was protected from public view as part of the “deliberative” process. That hearing was about Beck’s nomination to lead the Consumer Product Safety Commission. Since then, some Republican senators have joined the opposition to Beck, and her confirmation has been stalled.

The EPA said it expects to release its final TCE risk evaluation by the end of the year, the final step before rulemaking. The agency has not responded to the scientists’ request to investigate political influence over the draft. But the EPA has defended the decision to switch away from fetal cardiac defects as a baseline.

“While EPA’s draft risk evaluation found evidence that TCE may produce cardiac effects in humans, these effects were not observed consistently across all the available science,” an EPA spokesperson said in an email to Reveal, though the agency’s own scientists had assessed all the research and concluded that TCE can cause fetal heart damage.

The Halogenated Solvents Industry Alliance, which represents companies that sell TCE, fought the New York bill. The trade group stressed that it was the job of the federal government, and not states, to review chemicals.

“HSIA respectfully requests that the State of New York await release of the EPA’s final risk evaluation of TCE to determine what risk management steps, if any, are appropriate,” the group said in an April memorandum of opposition signed by Executive Director Faye Graul and counsel Thomas W. Faist. “The State should not second-guess the work of the federal government before completion of its task.”

A piece of federal legislation, the Lautenberg Chemical Safety Act of 2016, could complicate a New York TCE ban. Under that law, federal regulatory decisions supersede state ones.

Environmental groups support the New York ban because of the federal government’s long-standing failure to restrict the chemical. Reveal’s investigation uncovered a decades-long effort by chemical companies and their supporters in the federal government to attack and undermine the science showing the connection between TCE and fetal heart defects, in an effort to beat back regulation of the ubiquitous chemical.

Kaminsky first learned about TCE from “A Civil Action,” a 1998 feature film about TCE-contaminated water in Woburn, Massachusetts, starring John Travolta and Robert Duvall. That community suffered significant increases in childhood leukemia and other cancers. Plaintiffs accused Beatrice Foods and W.R. Grace & Co. of dumping TCE and other chemicals that eventually reached Woburn’s drinking water. In February, an investigation by Long Island newspaper Newsday exposed that military contractor Northrop Grumman Corp. knew since the 1970s that its operations were polluting groundwater in Long Island with TCE and other toxic chemicals. As a result of the contamination, public drinking water in Bethpage and other Long Island communities has to be treated.

Reveal’s investigation found that TCE contamination is present in nearly 800 toxic Superfund sites in every state. The military has found it in 1,400 of its operational facilities.

Minnesota adopted a TCE ban in May.

Kaminsky said the New York State Legislature acted because he and his colleagues do not believe the federal government will take action to ban TCE – at least not under President Donald Trump. “We are just one state, but we’re hoping this could be a model for others, and we’re hoping the federal government will get its act together,” Kaminsky said.

COVID-19 postponed action on New York’s bill because legislators were not meeting, but it may also have helped avoid a lobbying blitz against the bill. With the Capitol closed to the public, Kaminsky was unable to bring scientists to Albany to testify about TCE’s risks, but that meant chemical industry lobbyists did not have access to legislators either.

But foes of the TCE ban may aim their sights on Cuomo. “It now goes before the governor, and I’m sure a lot of those forces will be trying to get him to not sign the bill,” Kaminsky said. “And I’m hopeful he will.”

By Elizabeth Shogren Reveal from The Center for Investigative Reporting August 4, 2020