Nicaragua to crack down on conflict beef 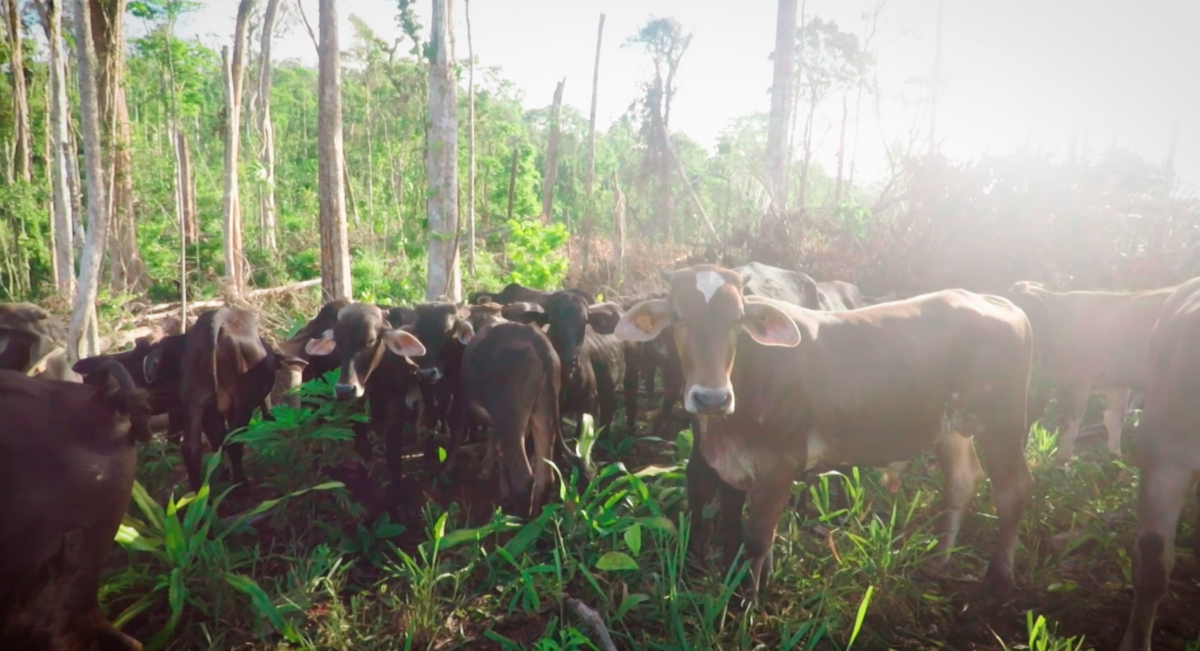 Cattle are being illegally raised on Indigenous lands, inside the Indio Maíz Biological Reserve, a protected Nicaraguan bioreserve.

The Nicaraguan government has taken steps to ensure conflict beef does not end up on U.S. grocery store shelves, following reports that cattle ranchers are killing Indigenous people in the country’s eastern rainforest as they push to expand pastureland.

After nearly a decade of lax enforcement, the government is enlisting the National Police and local municipalities to stop cattle illegally raised on stolen land or in protected biospheres from reaching the country’s slaughterhouses, according to internal government documents obtained by Reveal.

The government actions come in direct response to an investigation by Reveal from The Center for Investigative Reporting and PBS NewsHour that connected a major Nicaraguan beef importer to some of the largest grocery retailers in the United States, including Walmart, Target and Safeway.

Dozens of Indigenous people on Nicaragua’s eastern Caribbean coast have been killed in recent years by cattle ranchers and other settlers who are encroaching on the country’s rainforest. That rainforest, the second-largest in the Americas, is rapidly shrinking as trees are cut down to make way for pastureland.

The vast majority of Nicaragua’s total beef production is destined for export, with the United States as the biggest customer, according to the U.S. Department of Agriculture. It is the third-largest supplier of frozen beef to the United States, ahead of all other Latin American countries, including Brazil and Uruguay, according to import records through September of this year.

Six Nicaragua slaughterhouse companies supply all that beef, sending frozen beef cuts and hamburger to shipping ports across the United States, according to the USDA. Department records show that the largest U.S. retailers relied on imported beef from at least one major importer, Thomas Foods USA, which sources meat from some of these slaughterhouses. The department said there has been no way to guarantee that beef was not raised on stolen land.

This year, Nicaraguan beef imports to the United States jumped 20%, even as death threats and armed attacks against Indigenous communities have continued, according to the United Nations.

Now, following the PBS NewsHour broadcast and an outcry from high-profile Nicaraguan voices such as Bianca Jagger, a longtime Central American human rights defender, the government is making new plans to prevent illegally raised beef from reaching the slaughterhouses.

The Nicaraguan government is relying on a law passed in 2011 that has never been fully enforced, which requires ranchers and beef producers to track cattle from birth to slaughter. Under the law, cattle ranchers and slaughterhouses must earmark each newly born calf with a unique tag and ID number, which must be presented before the animal is butchered.

Illegal ranchers will be denied these tags and therefore cut out of the market, preventing them from selling their cattle at auction or directly to the slaughterhouses, if the government follows through in fully enforcing the law.

The Nicaraguan government has for the first time begun using the National Police to actively enforce the law, according to internal documents from Nicaragua’s Institute of Agricultural Protection and Health, a government agency known by its Spanish acronym, IPSA. The documents also show that the Nicaraguan government is now requiring regional mayors, whose offices issue the ear tags for recently born calves, to strictly adhere to the law.

The new drive to implement the law has support from the nation’s three main cattle associations, which are facing international pressure to stop the murders of Indigenous people and deforestation. Europe currently does not allow beef to be imported from Nicaragua; that could change if Nicaragua is able to dependably track its cattle.

The Nicaraguan cattle associations further requested that the government update the law to require that upon sale, cattle come with a letter verifying that the animals did not originate in a protected area.

Only months earlier, Ronald Blandón, general manager of the National Commission of Cattle Producers of Nicaragua, one of the three industry associations, had expressed no urgency about the lack of full implementation. At that time, he told the nonprofit news site Mongabay that about 85% of cattle properties are registered as required by the 2011 law.

“A bovine traceability program is a process that does not happen from one year to the next. It is difficult,” Blandón said.

Now, Blandón is calling on the government to act swiftly.

Both Blandón and the Nicaraguan government have a lot at stake. Beef is the country’s No. 1 export, and the industry is one of the biggest employers in Nicaragua, which has the second-lowest per-capita income in the Western Hemisphere.

If U.S. wholesalers and retailers turn away from Nicaraguan beef over ethical concerns, it could have widespread effects.

The country’s cattle and beef associations “are making an effort to ensure that we do not purchase or process cattle, as well as not promoting production in areas where livestock activity is not legally allowed, such as reserve areas and protected areas,” Blandón and the other two heads of industry wrote in a joint letter to IPSA, the agricultural agency.

Blandón did not dispute that illegal beef has made its way to the United States, but stressed that some of the growth in exports is coming from legally run family farms and commercial operators.

“We respectfully want to express that we do not believe that all this increase in beef exports comes from areas of biosphere reserves,” he wrote, in Spanish, in an email to Reveal.

Because much of the illegal ranching is happening in remote eastern Nicaragua, sometimes deep within the rainforest, it is likely no one knows exactly how much of Nicaragua’s beef is coming from these protected regions and how much from legal operations elsewhere in the country.

According to records obtained by Reveal, Ricardo José Somarriba Reyes, executive director of the Institute of Agricultural Protection and Health, is leading the effort to begin enforcing the traceability law. He did not respond to emails seeking comment.

The government’s new enforcement drive targets only the movement of cattle, not the people stealing land from Indigenous communities and burning rainforest for pasture, said Lottie Cunningham, a lawyer and advocate from the Miskito community.

“For us, it’s not enough,” she said. “We want a deep investigation. We need people to be punished. We want these land grabbers out of our territory. We want the government to protect our land rights.”

This article was edited by Esther Kaplan and Andrew Donohue.

Nicaragua to crack down on conflict beef

By Nathan Halverson Reveal from The Center for Investigative Reporting December 9, 2020