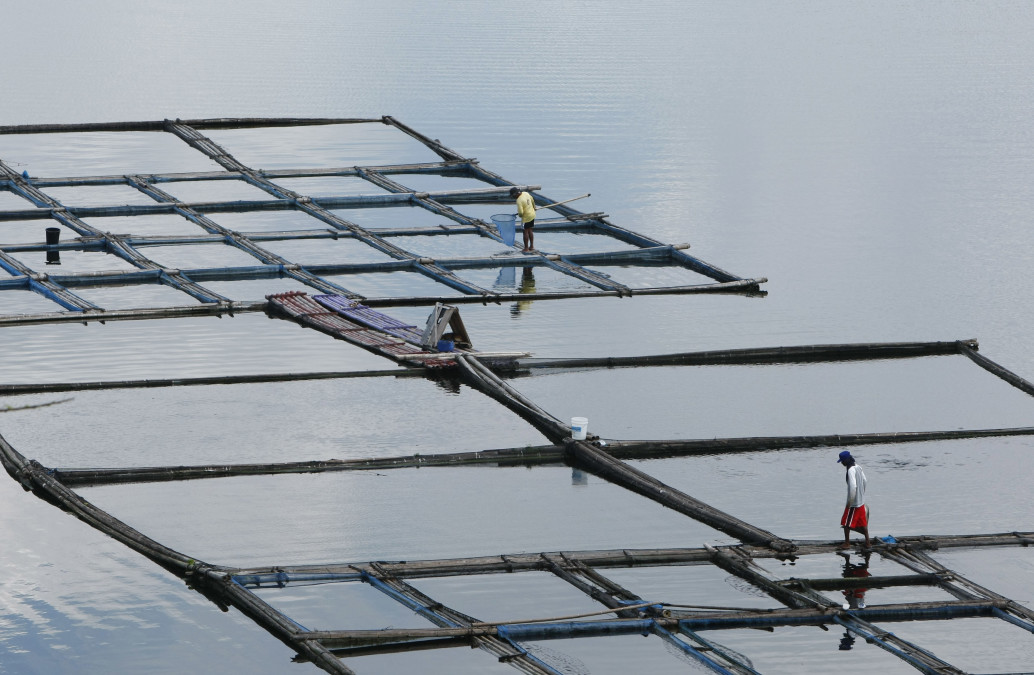 Fishermen work on a tilapia farm in the Philippines. Some 90 percent of the seafood in the United States comes from other countries.

Call it the international food movement: From blueberries to raw sushi, the tide of imported food is rising in the U.S.

Right now, about one-sixth of what Americans eat comes from outside our borders. But in recent years, food imports have grown an average of 10 percent a year, a trend that’s expected to continue. Some 90 percent of our seafood, such as shrimp and tilapia fillets, comes from other countries, as well as about half of our fresh fruit. That’s despite the growing popularity of farmers markets and the local food movement.

As what we eat becomes increasingly globalized, federal regulators are scrambling to prevent unsafe products from entering our borders. A new report from the U.S. Government Accountability Office casts doubt on how effective they are at keeping food imports safe.

The stakes are high, because outbreaks of foodborne illness can be deadly. In 2012, a listeriosis outbreak linked to ricotta cheese imported from Italy killed four of the 22 Americans it sickened.

Even with food grown within the U.S.’s borders, regulators struggle to prevent and curb outbreaks of foodborne illness. Food safety is such a problem that Congress and President Barack Obama are considering whether the now scattered oversight of the nation’s food supply should be consolidated into one agency.

The U.S. Food and Drug Administration has primary responsibility for overseeing the safety of most of what we eat, with notable exceptions such as meat and poultry. But that federal agency examines only about 2 percent of food imports at ports of entry and actually tests even less than that.

So in 2008, the FDA started opening foreign offices to help identify unsafe food, drugs and products before they make their way to the U.S. The agency now has seven of these offices around the world in China, India, Europe and Latin America. The FDA was unable to provide a budget for these foreign offices by press time.

A new report from the GAO said it’s unclear if those offices are making our food safer. That’s because the offices don’t have performance measures to track and evaluate specifically how what they do improves food safety.

“We don’t really know the extent to which the foreign offices are contributing to the safety of imported food,” said J. Alfredo Gomez, a director on the office’s natural resources and environment team.

In one area, the GAO report found that the FDA is clearly falling short. The agency is failing to perform the number of inspections of foreign food facilities that they’re required to do under the Food Safety Modernization Act of 2011. “They’re not following the law as currently laid out,” Gomez said. In 2008, the U.S. Food and Drug Administration warned consumers to steer clear of fresh jalapenos after salmonella bacteria was found on a pepper imported from Mexico. The Centers for Disease Control and Prevention estimates that for every documented case of salmonella poisoning, 29 cases may remain unreported.Credit: Brian Zak/AP Images/Sipa Press

The FDA has the authority to refuse entry of food into the United States if its inspectors have not been allowed access to the foreign facilities where it was produced. But without adequate inspections, that threat doesn’t really have teeth.

Plus, the agency has no plans to even try to perform all the inspections that they’re mandated to do, citing budgetary constraints. FDA officials questioned the value of doing all those inspections, too, preferring instead to focus their limited resources on providing technical assistance to the food industry – both domestic and foreign – to comply with new U.S. food regulations.

The GAO report also found that the FDA’s foreign offices are understaffed. Nearly half of the positions in these offices were vacant, with most of the openings in China, where the agency has had trouble getting visas from the Chinese government. The staffing problem in China is so bad that the agency sometimes relies on translators provided by the firms that they’re inspecting, the report found. That could risk compromising the integrity of their findings.

Officials from the FDA’s foreign offices defended their work to the General Accountability Office, citing instances where they’d made “significant contributions to determining the cause of outbreaks that lead to illnesses or deaths in the United States.” For instance, the India office rapidly inspected tuna processing plants in 2012 that were potential sources of a salmonella outbreak that sickened 425 people in the U.S. in 28 different states, including 55 hospitalizations.

The Centers for Disease Control and Prevention estimates that for every documented case of salmonella poisoning, 29 cases may remain unreported, putting the likely toll of that outbreak at more like 12,325 illnesses. Eventually, Moon Marine USA Corp. of Cupertino, California, voluntarily recalled the frozen raw yellowfin tuna from India implicated in the outbreak.

Yet by the time U.S. inspectors reached the seafood company in southern India, the damage had been done, Fair Warning reported in 2014. Inspectors found “water tanks rife with microbiological contamination, rusty carving knives, peeling paint above the work area, unsanitary bathrooms and an outdoor ice machine covered with insects and ‘apparent bird feces.’ ”

The inspectors aren’t supposed to only be reactive, either. They have the ability to inspect these kinds of facilities before outbreaks; any company that wants to ship food to the United States has to agree to be inspected, or the FDA can refuse their food.

In all, Fair Warning found, the FDA rejects about the same number of food imports as it did a decade ago – when imports were less than half the current level.

The General Accountability Office made several recommendations about how the foreign offices could be improved, but it noted that it had made two of those same recommendations in another report in 2010, and the FDA had not complied with them.

A spokesperson for the FDA said the agency had no comment on the GAO report beyond its official response that is included in it. That response says the agency has made significant progress toward meeting the 2010 goals.

By Katharine Mieszkowski Reveal from The Center for Investigative Reporting March 18, 2015