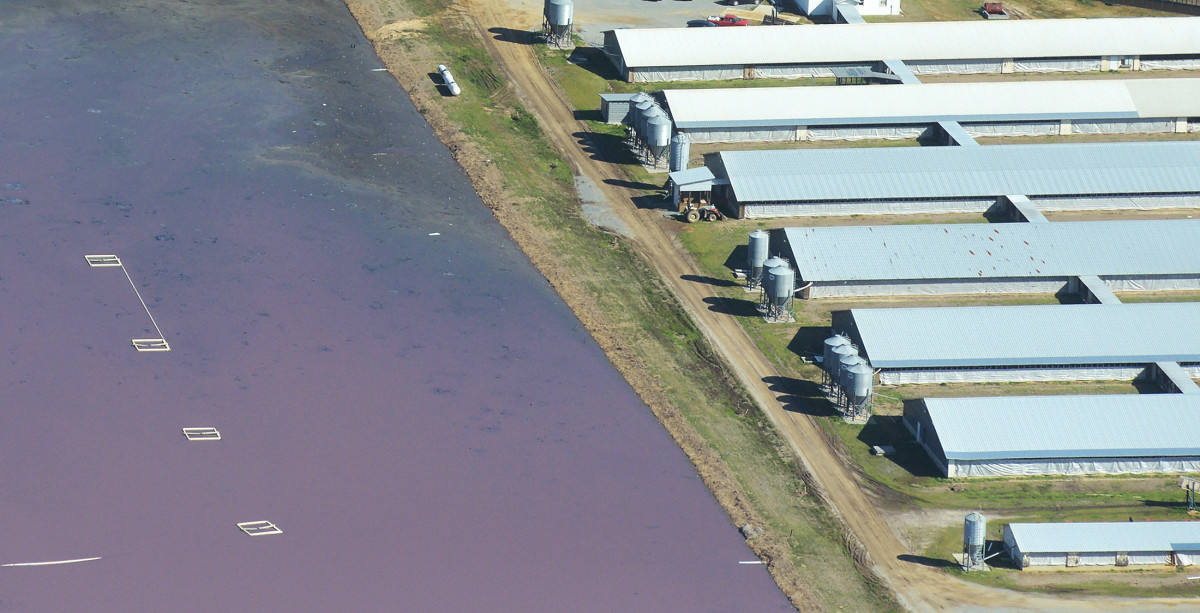 A waste lagoon sits next to hog houses at the Stantonsburg Farm in Greene County, N.C. More than 500 North Carolinians who live near lakes of toxic pig manure have filed nuisance lawsuits against the Chinese company that owns Smithfield Foods.

What do China, its rapidly growing middle class and toxic manure lagoons in North Carolina have in common? Absolutely nothing. And even if they did, don’t mention it.

So say attorneys for the Chinese company that now owns America’s largest pork producer, Smithfield Foods. They have asked a federal judge to forbid people who live near these manure lagoons from mentioning the new Chinese owners – or the country of China or pork exports to China – in court.

Listen to the Reveal segment

The attorneys are defending the company against at least 25 nuisance lawsuits.

More than 500 North Carolinians who live near the company’s sprawling lakes of toxic pig manure brought the complaints. They contend that their health and property values are being hurt by the manure lagoons and that the Chinese owners are making the situation worse by expanding pig farms to export more hams, bacon and loins to China.

One manure lagoon cited in the lawsuit captures 4.3 million gallons of feces, urine and flush water per year. To empty the lagoon, its foul-smelling sludge is sprayed on adjacent fields – creating a fine mist of feces, urine and water that neighbors complain blows onto their properties and homes. The lawsuit calls it a nuisance. A sprayer soaks a field with liquefied manure and urine from a large-scale hog farm in Duplin County, N.C. Nearby residents complain that the mist blows onto their properties and homes. Credit: Emery Dalesio/Associated Press

Smithfield Foods operates 2,700 factory pig farms in 12 states – with many adjoining manure lagoons encroaching on people’s backyards. Some of the North Carolina residents live within a few hundred yards of the waste pits, sparking fierce criticism. Video footage from a remote-controlled drone flying above one manure lagoon has been watched more than 3 million times on YouTube since December.

Health concerns about manure lagoons existed long before the Chinese company purchased Smithfield Foods. But exporting more pork to China will exacerbate the problem, according to health advocates who criticized the Smithfield takeover when it was announced in 2013.

In this outtake from PBS NewsHour, Patrick Woodall, research director at Food & Water Watch, explained how devastating the deal would be for rural America, presaging these types of lawsuits.

In their lawsuit, neighbors of the factory pork farms take aim at this exact policy: “The growing Chinese middle class is growing exponentially with its demand for pork … a primary purpose of the acquisition and a primary current goal of the enterprise at this time is to increase production and increase exports to China.”

That means more manure and more wandering mists of pig feces and urine, they contend.

Attorneys for the Chinese company, WH Group, don’t want any mention of China or the company’s plan to expand exports, calling the concerns “immaterial and impertinent.”

“Plaintiffs’ allegations are also scandalous and clearly designed to inflame the jury and the public,” attorneys said. “Even if true, the allegations contained in the objectionable paragraphs are completely irrelevant to plaintiffs’ claims.”

They have asked the judge to banish references to the Chinese owners and their efforts to expand pig farms and exports to China.

Smithfield Foods already was a massive pork (and manure) producer before the takeover – it was twice the size of its nearest U.S. competitor, processing an average of one pig every second. And it already accounted for 37 percent of the pork exported from the United States, according to the company’s own figures.

WH Group effectively purchased 1 in 4 pigs raised in America in its takeover of Smithfield and now is increasing hog production and exports. C. Larry Pope, chief executive of Smithfield, had no problem mentioning China last fall when he talked about what was driving the purchase:

But Pope, who did not shy away from the difficult questions during the interview, also made it clear that the Chinese company and its chairman, Wan Long, were sensitive to how the Smithfield takeover affected Americans:

In their lawsuit, the North Carolina residents are accusing WH Group, through its subsidiary Murphy-Brown, of not doing enough to ease the effects on them.

“In one or more other states, defendant has taken steps to reduce the odors where its hogs are kept. It is only logical that they are required to do the same in North Carolina, the second-largest hog producing state in the country,” one suit states.

In China, the company uses better manure management technology, the lawsuit alleges. “WH Group, touts on its website that it uses special measures at its facilities in China to treat the waste and to limit the odor and nuisance. These measures are not used in North Carolina.”

During the interview last fall, Pope said Smithfield’s factory farm technology – considered among the best in the world – already was helping the Chinese. He rebutted critics of the deal by asking who was getting hurt in the Smithfield takeover. In this final outtake, he stressed that technology developed at Smithfield could help improve conditions for the nearly 1.4 billion Chinese who have endured a recent spate of food calamities:

It now appears 500 North Carolinians have stepped forward with their 25 lawsuits to say they are being damaged by the deal and the company’s expanding hog farms.

“The Plaintiffs feel angry, fearful, worried, and depressed. They are worried and fearful about their health and their children’s health,” according to the lawsuit. “In 2011, a study summarized how ‘Animal manure and sewage sludge’ were harmful to neighbors based on studies of 16 eastern North Carolina communities near industrial swine farms.”

Members of the North Carolina General Assembly seem less than sympathetic to these types of lawsuits. The News & Observer of Raleigh, North Carolina, reported that these 2013 lawsuits “come at a time when the General Assembly proposes to change the law to prohibit any newcomers to hog farm neighborhoods from filing nuisance suits. An amendment introduced in a senate committee meeting also would make it so neighbors who lose in court would have to pay the legal bills of the corporate farms.”

Smithfield Foods is not expected to be the last major U.S. food company the Chinese buy. In the last few years, China has become the largest importer of U.S. agriculture. How the impact of China’s growing appetite plays out – within the North Carolina federal court, the state General Assembly and across the country – is likely to continue attracting debate. Right now, it just happens that the stink is originating from manure lagoons in North Carolina.

By Nathan Halverson Reveal from The Center for Investigative Reporting March 10, 2015