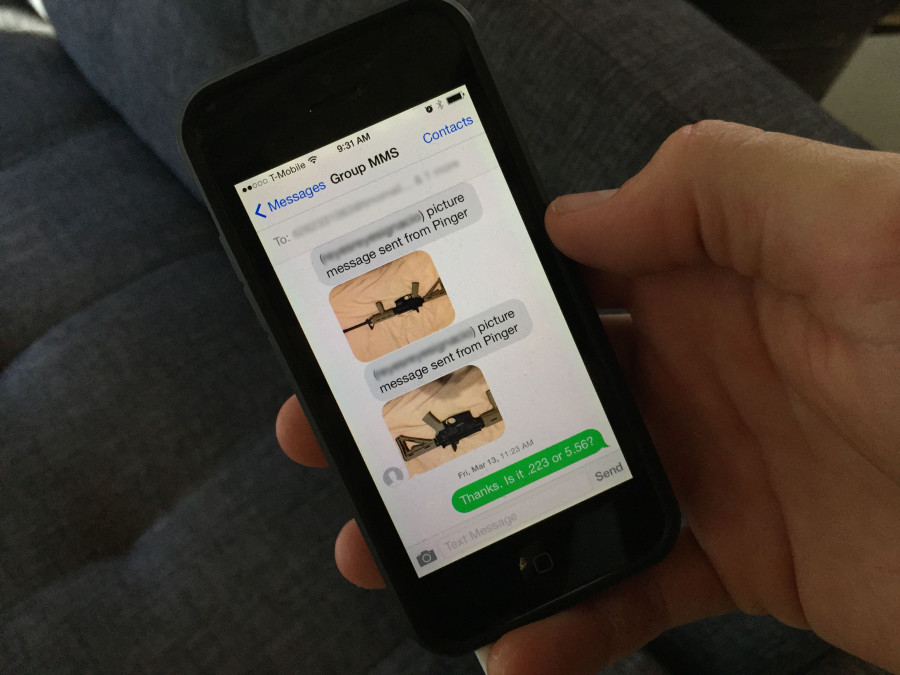 A text message exchange between a Reveal reporter and Craigslist seller shows a gun being offered.

Listen to the segment

Cash wasn’t the preferred payment for this particular set of car tires. “Jayson,” the seller who listed the tires on Craigslist in New York City last month, wanted ammunition for an AR-15 semi-automatic rifle.

The exact size wasn’t a problem, as either .223-caliber or 5.56 mm ammunition would do.

“Dont matter just for range and my ar barrel is 556 so can shoot either 1,” Jayson replied in a text message to a Reveal reporter about the offer. Another Craigslist seller with a new iPhone 6 in Venice, California, was even more flexible than the seller with the car tires. A March 9 ad featured a photo of the phone for “$1K cash.” The seller also would accept “.45 guns or ammunition, 9mm, rifles, ar-15 or glock.”

Reveal recently exposed the flaws in eBay’s policy against selling assault weapon parts on its website. But Craigslist’s gun ban goes even further. Buying or selling any guns, gun parts or ammunition is plainly prohibited, along with prescription drugs, food stamps and anything deemed “offensive, obscene, defamatory, threatening, or malicious.”

The online market for guns is growing. Tracking individual sales, however, is difficult because many guns are transferred between private parties without a background check. Of the roughly 2,400 agents employed by the federal Bureau of Alcohol, Tobacco, Firearms and Explosives, none focuses solely on online sales, agency spokeswoman Helen Dunkel said.

Many of the Craigslist ads featuring guns sought to sell or trade for them. Want ads were equally candid. One in Arizona offered a black and tan AR-15 in exchange for a motorcycle.

A savvy seller in Modesto, California, meanwhile, looked to capitalize on 2,000 rounds of the popular M855 ammunition, which the government threatened to ban earlier this year before backing off amid fierce opposition from gun groups, including the National Rifle Association. The seller had just sold 1,000 rounds for $1 per round – more than three times the cost of the ammunition in 2014.

“Am selling another thousand to the highest bidder. Make an offer,” the seller wrote in an email March 10.

A week later, after the Bureau of Alcohol, Tobacco, Firearms and Explosives announced it was reconsidering the ban, the seller wrote back to say the second case had sold for $850.

“I really can’t believe how scared people get when things like this happen,” the seller said of the potential ban on M855 ammunition. “Anyways sorry we couldn’t do business.”

Federal law allows individuals who live in the same state to sells guns privately without a background check or paperwork. Out-of-state sales require a licensed gun dealer to serve as an intermediary. Ammunition, however, can legally cross state lines, though some states, including California, restrict the size of magazines that can be sold to 10 rounds.

Craigslist asks users to flag prohibited items in an effort to “keep craigslist safe and useful for everyone.” Unlike eBay, Craigslist does not appear to have an automated keyword filter to prevent banned items from being listed, though as Reveal reported, getting around eBay’s filtering is as simple as adding a space midword.

Craigslist is inherently local by design and doesn’t offer a search function across all of its individual locations. This makes it difficult to figure out how many guns and gun parts are on the site at any given time. But a cursory search for guns and ammunition in a handful of Craigslist’s largest locations – including Los Angeles, the San Francisco Bay Area, Chicago, Las Vegas and New York – turned up dozens of prohibited listings.

Numerous emails and phone messages to Craigslist seeking comment about enforcement of its policy were unanswered. Susan MacTavish Best, an independent public relations specialist paid to be a spokeswoman for the company, did not return repeated phone, text and email messages.

Craigslist founder Craig Newmark declined to comment through his media liaison, Bruce Bonafede. Bonafede said Newmark is “fully aware of the situation,” but he is no longer involved in the day-to-day operations at Craigslist and therefore couldn’t speak to the website’s gun policy. The Center for Investigative Reporting, which runs Reveal, currently receives funding from the craigslist Charitable Fund and has, in the past, received support from the Craig Newmark Philanthropic Fund.

It isn’t just completed guns and ammunition that change hands on Craigslist. Parts for making your own gun at home also are available. A Craigslist ad in Las Vegas offers a used jig to build your own AR-15 lower receiver for $100. Credit: Screen shot from Craigslist.org

A recent ad in Las Vegas offered a used jig to build your own AR-15 lower receiver for $100. The seller appears to be aware of Craigslist’s policy and notes that the listing is “NOT A WEAPON – or any part of one.” The phone number listed in the ad dials a local store that specializes in concealed carry holsters, including neon Glock Sockets to holster the semi-automatic pistols.

It’s unclear when Craigslist started banning the sale of guns and gun parts. But the lack of guns on the site in 2007 was cited by the creators of Armslist.com as their inspiration. Jon Gibbon and Brian Mancini, who attended the U.S. Air Force Academy together, launched Armslist to fill what they considered a void in the online gun market: classified sales.

It worked. Armslist quickly became one of the largest gun markets on the Internet. In a 2010 interview, Gibbon described the website as a “gun show that never ends.”

A 2013 New York Times investigation of Armslist found that convicted felons were buying and selling guns they wouldn’t have access to if they had to submit to a background check through traditional retail channels. The newspaper analyzed more than 170,000 ads on Armslist and found that the vast majority were listed by private parties who, unlike licensed gun stores, are not obligated to conduct a background check before selling a gun.

In addition to specialized gun markets like Armslist and GunBroker.com, general-purpose websites like eBay and Amazon have their own rules on guns.

Yet, as Reveal found last month, eBay sellers routinely sidestep that company’s strict firearms policy, which bans the sale of assault weapon parts and other weapons. Even when listings were flagged and eBay representatives vowed to remove them, gun parts remained up on the site for weeks.

It wasn’t until Reveal detailed the persistent problems enforcing the policy that eBay manually removed a handful of prohibited parts and shut down a Nevada-based seller specializing in AR-15 components – called sfars_llc, short for “Sh*t for AR’s” – which had repeatedly violated eBay’s rules. Many other gun parts dealers continue to sell on eBay.

By Matt Drange Reveal from The Center for Investigative Reporting April 15, 2015