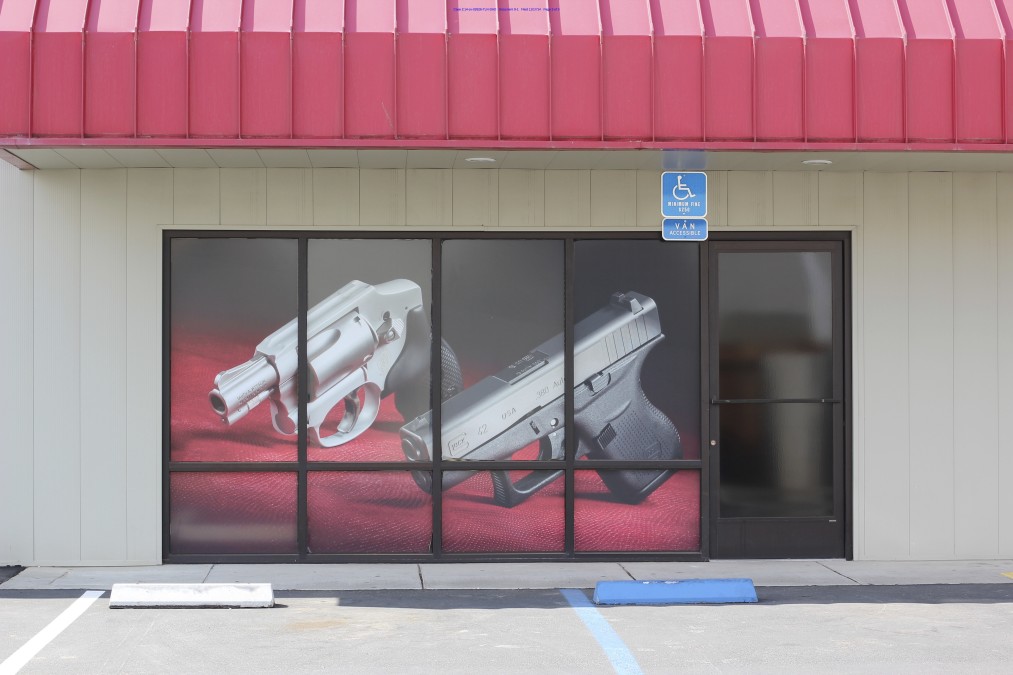 Images of a Smith & Wesson revolver and a .380-caliber semi-automatic pistol cover the windows of the Tracy Rifle and Pistol gun shop in Tracy, Calif. State inspectors cited store owner Michael Baryla in September for violating a law that prohibits stores from advertising the sale of handguns. Baryla filed a First Amendment lawsuit challenging the law.

For two sentences published consecutively more than 220 years ago, it’s not often that you find the First and Second amendments together.

That’s exactly what’s happened in a lawsuit filed in federal court in Sacramento last year, which pits a gun store’s free speech rights against an obscure California law. The case, Tracy Rifle and Pistol v. (Attorney General Kamala) Harris, centers on a 1923 state law that prohibits gun stores from advertising handguns in any way that can be seen from outside the store.

Photos of a shotgun? Sure.

But not handguns, as Tracy Rifle and Pistol owner Michael Baryla discovered in September. Agents from the California Department of Justice had just completed a routine paperwork inspection of Baryla’s store when they informed him that the giant gun photos covering his windows violated the law.

Baryla was issued a citation and ordered to remove the photos, a sort of fix-it ticket for gun store owners. Baryla had never heard of the law he was breaking.

“There’s thousands of laws that apply to gun dealers,” Baryla said. “I know most of them, but there are still some that pop up every once in awhile.” The Tracy Rifle and Pistol gun shop in Tracy, Calif., displays images of an AR-15 rifle and a .45-caliber pistol equipped with a flashlight. Credit: Courtesy of Brandon Combs

The 92-year-old law exists to prevent someone who walks by a gun store while in the heat of an argument from being drawn into the store by an advertisement, buying a gun and immediately using that gun to shoot another person. It’s an impulse buy worst-case scenario.

But this hypothetical situation is rendered moot by the mandatory 10-day waiting period between paying for a gun and taking possession of it. The waiting period is a cooling-off period for prospective buyers and also gives the state time to conduct a background check to ensure the person is legally allowed to own a gun.

There are a few exceptions to this but they do not apply to the general public – only to people such as gun dealers with a special weapons permit or police officers who have prior approval.

After reviewing his citation, Baryla contacted his friend Brandon Combs, who with Baryla’s help created a statewide association of gun stores called CAL-FFL three years ago. Combs immediately realized the case was a Bill of Rights “twofer,” and started researching the law’s origins.

Combs then put Baryla in touch with Sacramento-based attorney Bradley Benbrook, who filed a lawsuit against Harris and Stephen Lindley, chief of the state’s Bureau of Firearms. The suit doesn’t seek monetary damages, but rather asks a judge to grant an injunction preventing the state from enforcing its ban on handgun advertising.

“I read this law, and I thought, ‘How can this be legal?,’ ” Benbrook recalled as he discussed the case with gun owners at a recent Second Amendment policy event that Combs organized in Sacramento.

“What the attorney general is really saying, without expressly saying it, is that the right to free speech is OK except when it’s about guns, because guns are bad,” Benbrook said.

A spokeswoman for Harris said enforcement of the advertising ban was not a new initiative. She declined to comment on the case.

In court documents filed in response to Baryla’s lawsuit, Harris argues that “California has a substantial interest in decreasing handgun violence,” and that the law “directly advances that interest by dampening demand for emotion-driven impulse purchases of handguns.”

Similar laws exist in Pennsylvania, Texas and Washington, D.C., Combs said. He couldn’t find any evidence that any still were enforced, however.

Legal challenges that tie the First and Second amendments together are rare, said Peter Scheer, executive director of the First Amendment Coalition. Scheer said the handgun advertisement law is “quite vulnerable” on First Amendment grounds.

“The rationale makes sense in the abstract but it doesn’t survive any kind of close scrutiny given the fact you can’t just make an impulse buy,” Scheer said. “You can’t walk into a gun store, leave with the gun and go shoot a person.”

Scheer noted that a separate lawsuit challenging the 10-day waiting period for current gun owners, Silvester v. Harris, could have an impact on Baryla’s case. The attorney general’s office is appealing a 2014 decision in the Silvester case, which found that for gun owners who already have gone through a background check, the 10-day waiting period burdened their Second Amendment right to a gun.

“If that were the case, it might change my view of the First Amendment argument,” Scheer said.

In the meantime, Baryla’s 6-and-a-half-foot-high handgun photos remain. The state has agreed not to make him remove them until a judge decides whether to grant an injunction.

“As long as I can avoid taking them down, I’ll be happy,” Baryla said, adding that it would likely take a couple of years to resolve the case. The most recent court hearing was canceled by Sacramento federal Judge Troy Nunley, who opted to review the case without oral arguments. There’s no timeline for when he will make a decision.

“I hope the injunction is granted, so we can argue all this out,” Baryla said. “It’s such a flagrant violation.”

By Matt Drange Reveal from The Center for Investigative Reporting April 7, 2015