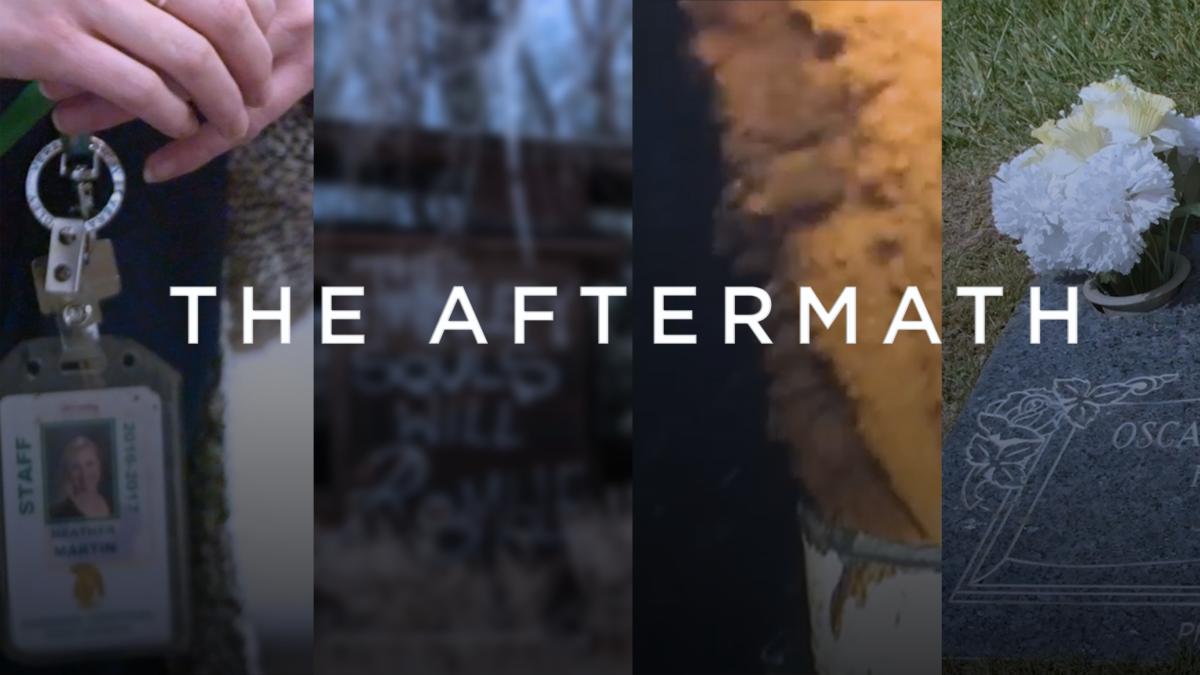 From natural disasters to national tragedies, the media swarms around major stories, hurtling those affected into the spotlight. But what happens after the cameras are gone and the country moves on to the next headline? “The Aftermath” revisits stories that once dominated the news, investigating where people are now and what has happened since, to tell the story after the story.

“The Aftermath” is the second series installment from Glassbreaker Films, an initiative supported by the Helen Gurley Brown Foundation, that aims to support women in documentary and investigative journalism.

Grieving in a Fishbowl

After a mass shooting, the media descends on the survivors. They’re asked time and again what they saw, what they felt and why they think it happened. After the dead are counted and the shooter’s motives are scrutinized, they are left to cope and move on.

Heather Martin was a senior at Columbine High School in Colorado when two teenagers shot and killed 12 students and one teacher. More than a decade later, 12 people were killed and dozens more injured in a shooting at an Aurora movie theater, just miles from where Martin lived.

To create a space for survivors to talk about their grief and traumatic new realities, Martin co-founded The Rebels Project, a nationwide support network that connects survivors of mass tragedy to help them process their experiences.

Martin says she desperately wants the group to stop growing, but every year, more members are joined by tragic circumstances.

Until Something is Done

In the early hours of 2009, 22-year-old Oscar Grant was fatally shot by a Bay Area Rapid Transit police officer at the Fruitvale station in Oakland, California. The shooting was captured on cellphone video and made headlines nationwide, leading to a national conversation about police brutality. The officer who shot Grant was convicted of involuntary manslaughter and served 11 months in prison out of a two-year sentence.

In the following years, as more police killings made the news, Grant’s mother, Wanda Johnson, decided to turn her pain and grief into a purpose. She became an integral part of a movement made up of mothers like her, whose sons were killed by police, to help them find justice and ensure that their children are not forgotten. The number of members continues to grow steadily every year.

Based on a True Story

The 2000 film “Erin Brockovich” seemed like a successful David versus Goliath story. A single mom of three took on PG&E for contaminating drinking water in Hinkley, California, and came out victorious, suing and winning $333 million from the giant utility company. But whatever became of the tiny town?

For the roughly 600 residents who received part of that payout, the ending wasn’t all happy. Residents who lived there in the ‘90s, such as Roberta Walker, say they suffer from residual health problems. And while they can’t disclose how much money they received from the lawsuit, they say it wasn’t enough to keep them afloat for long. Now, 21 years after the lawsuit, it seems the same public health hazard continues to affect the welfare of Hinkley residents.

The 2010 Deepwater Horizon spill in the Gulf of Mexico was an environmental accident unlike anything the United States had experienced before. It was the largest offshore spill in American history, killing 11 people and decimating millions of animals of different species. BP, the company responsible for the accident, will pay the U.S. a record-setting $20.8 billion for damages caused by the spill.

Seven years later, those who live near the Gulf say they’re not convinced the area will ever make a full recovery. As a pilot, Dr. Bonny Schumaker still can see the devastation from her low-flying plane, which she uses to take photos for ecological surveys.

William Granger, a lifelong commercial fisherman, says the spill devastated his business. Fearing his family would not have money to pay for groceries, he accepted a small, quick payment from a BP settlement. But the money was not enough to keep him afloat, and he is concerned about how he will continue to make a living.

By Reveal staff Reveal from The Center for Investigative Reporting November 13, 2017