JOIN TODAY!
Kids on the Line

The US is quietly opening shelters for babies and young kids. One has 12 children and no mothers 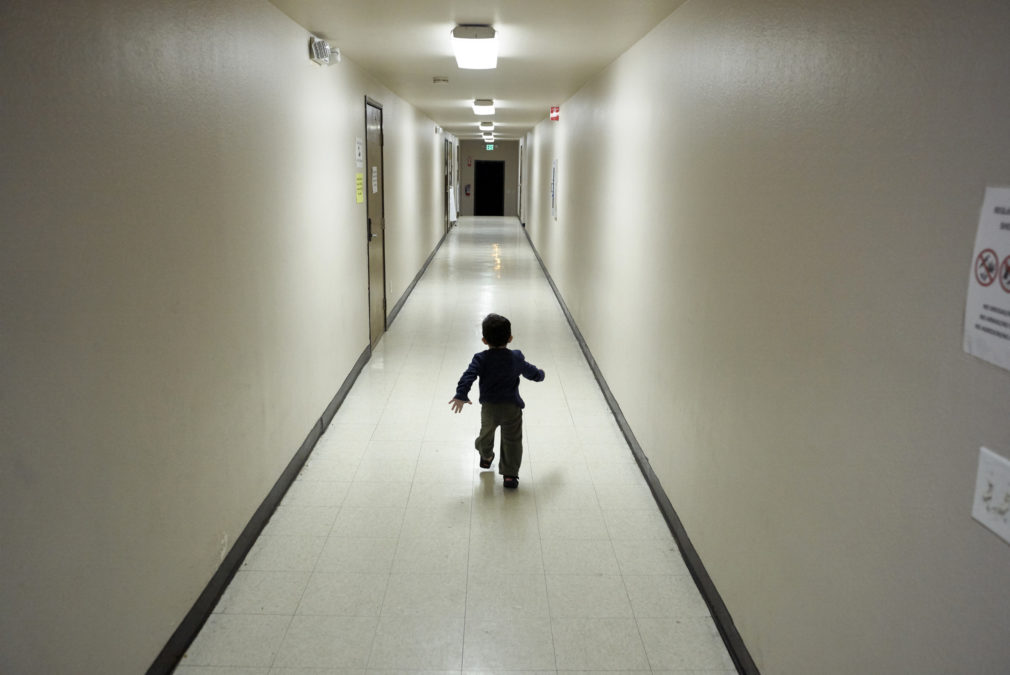 An asylum-seeking boy from Central America runs down a hallway after arriving from an immigration detention center to a shelter in this 2018 file photo.

The federal government is quietly expanding its use of shelters to house infants, toddlers and other young asylum-seekers. One Phoenix facility housed 12 children ages 5 and under, Reveal has learned, some as young as 3 months old, all without their mothers.

As part of this expansion, the government has designated three facilities to house newborns and unaccompanied teen mothers. Records obtained by Reveal from The Center for Investigative Reporting indicate a dozen children arrived at Child Crisis Arizona starting in mid-June, after it garnered a $2.4 million contract to house unaccompanied children through January 2022.

The kids, some of whom entered the facility as recently as Thursday and hail from Guatemala, Honduras, El Salvador, Ecuador and Brazil, are each living in Child Crisis without a parent.

The revelations come as the government draws widespread and growing protest over the treatment of infants, children and adults in its care. As advocates and attorneys monitor overcrowding and inhumane conditions at existing locations, new government-financed facilities, run by three agencies within two federal departments, continue to pop up around the country.

Children in at least one of these shelters, which holds a newborn, have not been provided legal services. Meanwhile, hundreds of children at the Carrizo Springs emergency shelter just outside San Antonio are not receiving legal services stipulated under federal law, Reveal has learned.

In addition, Crisis Care Arizona, a nonprofit, was recently cited by state officials for deficiencies before the arrival of unaccompanied infants and toddlers. Inspectors from the Arizona Department of Health Services found hazardous conditions in one location in February, including a “tall floor lamp (that) was unstable and tipped forward easily when light pressure was applied,” as well as unsanitary toys and chipped paint in both the restrooms and outdoor play area.

In January, state monitors found several records for children in Child Crisis’ care lacked information about a parent or health care provider. State standards indicate that water in the sink next to the diaper-changing station should run between 86 degrees and 110 degrees to ensure that employees’ hands are properly disinfected. The sink at Child Crisis in January measured just 70 degrees.

Inspections at three Child Crisis locations in Phoenix and Mesa over the past three years revealed 37 violations, including a lack of drinking water for children in classrooms, a missing lid on a vessel containing soiled diapers, an incomplete first-aid kit, and “dried yellow-orange liquid splatters on the base of one toilet.”

Phoenix City Council member Carlos García said he’s concerned about the welfare of the children at the facility. “Because of the recent deaths and rampant abuse, sexual or otherwise, at the hands of this administration, we need to make sure these kids’ lives are a priority,” he said, adding that reunification with a parent or other family member should happen as soon as possible.

“For those who don’t have that option, we need community response to make sure these children are taken care of,” he said.

The organization’s website says that its unaccompanied child population includes trafficking victims “ages infant through eighteen years of age (who) are in desperate need of a safe and appropriate shelter while seeking reunification with their family members.” The goal, according to the website, is to facilitate 65 new unaccompanied children.

Just weeks before Bethany Children’s Home was awarded its federal grant, a Philadelphia jury awarded the father of a 16-year-old $2.9 million after she took her own life while living at the facility – the result of a 12-day trial. And in January, a Bethany Children’s Home employee pleaded guilty to charges related to setting up a teen to be beaten by two others while on a school bus.

Inspection records issued by the Pennsylvania Department of Human Services in the last two years indicate a vast array of violations of state standards at the various homes that make up the Bethany Children’s Home campus. These include an allegation of sexual abuse by a staffer that wasn’t immediately reported to the state, problems with children’s medication logs and improper use of restraints – after a staffer placed a child into a restraint when the child was verbally aggressive and kicked a radiator.

One of the infants is just 2 weeks old and was born in the United States, making the child a U.S. citizen in the custody of the federal refugee agency.

Bethany Children’s Home requested that questions be submitted in writing but did not respond in time for publication.

Bethany Christian Services (not connected to the Pennsylvania facility), a Michigan-based provider that already contracts with the federal government to hold unaccompanied children, reopened a Modesto, California, facility last month that was once used as a home for women with unplanned pregnancies.

The state of California has licensed the group home to hold 12 children, and it’s currently holding four minors: two teenage parents and two babies. One of the infants is just 2 weeks old and was born in the United States, making the child a U.S. citizen in the custody of the federal refugee agency.

As the government expands its use of facilities to shelter children, it has not apparently kept up with federally mandated obligations to provide legal services to these asylum-seekers.

Under the federal law known as the Trafficking Victims Protection Reauthorization Act, the refugee agency must provide vulnerable children in its custody access to legal services. On its website, the agency states that these mandated services include visits with the client and advocating in the child’s best interest.

It wasn’t until this week, on July 8, that Bethany says it was in touch with a legal service provider that could furnish the children in Modesto with federally mandated legal services. It’s unknown whether these children have been directly connected with individualized legal services yet. Any delay in legal services could harm a child’s ability to get immigration relief.

In the Carrizo Springs emergency shelter, roughly a two-hour drive from San Antonio, where hundreds of children are being kept, the Refugee and Immigrant Center for Education and Legal Services, better known as RAICES, said the Office of Refugee Resettlement hasn’t yet given it clearance to provide legal services for children.

Jonathan Ryan, RAICES CEO, said the law is designed to protect children who have been placed in proceedings to be deported.

“That’s the case for kids in Carrizo,” he said. “There’s already been cases scheduled for court.”

The shelter has been open for two weeks, but the refugee agency hasn’t authorized a contract for legal services there, Ryan said.

The agency said it’s working on a response to our inquiry about the lack of legal services provided at various facilities in its contracted shelter network.

The news comes as the Trump administration last month ordered the refugee agency to stop funding certain education, recreational and legal aid for children in the agency’s care.

Ryan said RAICES plans to go to the shelter on Tuesday with a team, with or without a contract.

“These kids need lawyers,” he said.

This story was edited by Andrew Donohue and Matt Thompson and copy edited by Stephanie Rice.

This story has been updated to describe more precisely the location of the Carrizo Springs emergency shelter.

The US is quietly opening shelters for babies and young kids. One has 12 children and no mothers

By Aura Bogado Reveal from The Center for Investigative Reporting July 13, 2019