There might be something else in your milk besides milk 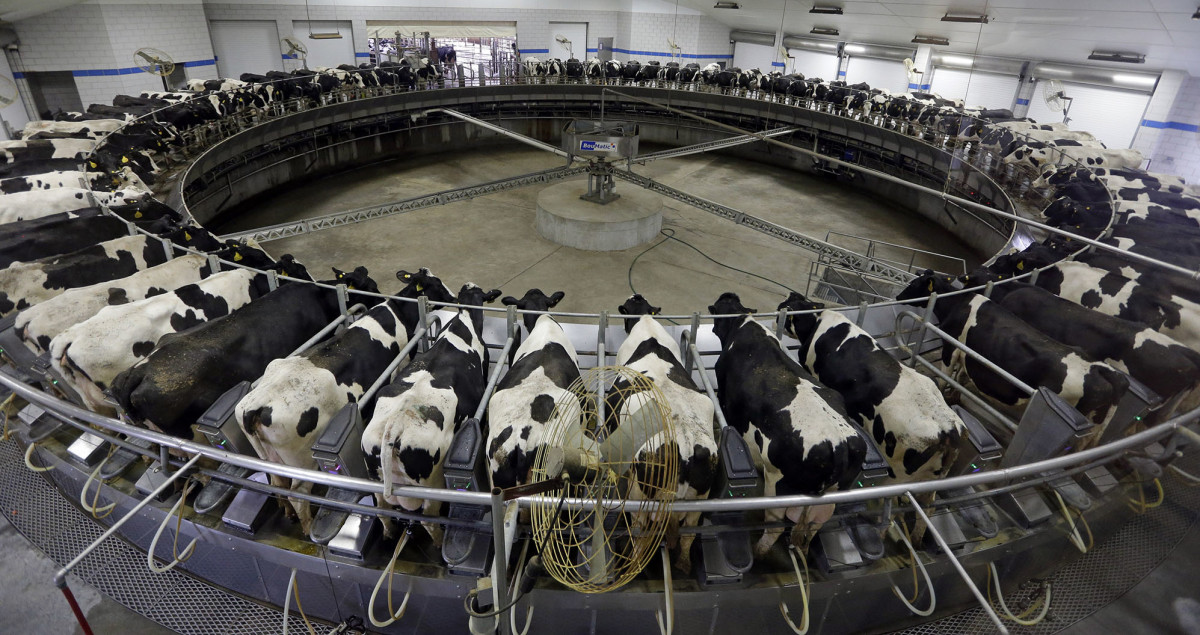 The U.S. Food and Drug Administration began looking into whether the drugs found in dairy cows also are turning up in their milk more than four years ago, but the agency has yet to release its findings.

You may be pouring more than just milk into your morning coffee.

Dairy cows get treated with a variety of medications to help them fight illness. While the industry tests milk to make sure a handful of common antibiotics are under control, it doesn’t look for many of these other drugs.

The medications can make people sick if they consume them. Their widespread use also accelerates the rise of antibiotic-resistant bacteria that can make illnesses more difficult to treat.

More than four years ago, the U.S. Food and Drug Administration began looking into whether the drugs found in dairy cows also are turning up in their milk. But the agency has yet to release the results of its inquiry, leaving consumers in the dark.

Here’s a look at why the government was concerned about what’s in our milk:

What are drug residues and where do they come from? Under federal rules, the industry tests raw milk, both conventional and organic, for at least four of six beta-lactams, a common class of antibiotics that includes penicillin and amoxicillin.Credit: Michael Conroy/Associated Press

Livestock is medicated to treat or prevent illness. In the U.S., animals also have been routinely fed antibiotics to help them get bigger faster and with less feed.

The FDA sets limits on what quantities of particular drugs can be in milk and animal tissues. To meet these limits, farmers and ranchers must ensure that animals have enough time for drugs to cycle out of their systems before selling their milk or slaughtering them for meat.

Under federal rules, the industry tests raw milk, both conventional and organic, for a common class of antibiotics called beta-lactams.  The milk is tested for at least four of six beta-lactams, such as penicillin and amoxicillin. Milk is discarded if it has too much of those drugs in it.

Federal inspectors test animals’ kidneys, livers and muscles for traces of dozens of drugs when they are slaughtered. When too much of a drug is detected, the meat is considered unsafe and cannot be sold for human consumption.

Milk is routinely tested for up to six of the most commonly used drugs that also can harm people. Some people have life-threatening allergic reactions to penicillin, for example. Unlike pathogens such as salmonella or E. coli, drug residues cannot be destroyed by cooking.

Experts say the amounts of these drugs allowed in milk are very small. The human health risk from these drug residues is “almost nonexistent,” said Pamela Ruegg, a dairy science professor at the University of Wisconsin, Madison.

But we don’t know if other drugs given to dairy cows might be in milk, too – that’s what the FDA is seeking to determine.

One of the drugs the FDA tested milk for was flunixin, an anti-inflammatory drug used for pain relief in cows. It can cause gastrointestinal ulcers and kidney damage in humans. The agency also looked for gentamicin, an antibiotic that’s illegal to use in cattle but has been found in dairy cows as recently as November, federal data show.

Residues also are related to a broader public health concern: Use of antibiotics – both in humans and animals – spawns antibiotic-resistant bacteria that can cause illnesses that are harder to treat. So using the drugs unnecessarily – to make animals grow bigger and faster, for instance – squanders their efficacy when we get sick and need them.

Every year, at least 2 million people in the U.S. are infected with antibiotic-resistant bacteria, according to the Centers for Disease Control and Prevention. Some 23,000 of them die as a direct result of these infections.

The overuse of antibiotics on livestock is such a serious problem that in December 2013, the FDA unveiled a new policy to attempt to control it. By the end of next year, drugmakers will change how many antibiotics are labeled, making it illegal to use them to increase animal size. The drugs, which humans also rely on to treat infections, will no longer be available over the counter and will instead require a veterinarian’s prescription.

The amount of residues allowed in meat and milk is the same regardless of why the drugs were used.

What’s the deal with dairy cows? In the past five years, dairy cows accounted for one-third of the drug violations found in animal tissues, federal data show.Credit: Morgan Lieberman/Flickr

There’s reason to suspect these drugs could be in milk. When dairy cows are no longer productive, they can be slaughtered for meat. That’s when inspectors find drug residues.

Historically, dairy cows have had more drug residues, so they’re more likely to be tested than most other animals.

In the past five years, dairy cows accounted for one-third of the drug violations found in animal tissues, federal data show. That’s despite the fact that they typically represent less than one-tenth of 1 percent of animals slaughtered each year.

Even though a dairy farm can produce both meat and milk, its products are tested separately by different bodies. When regulators find residues in animals, the carcasses are destroyed and the farm can be barred from selling more animals, but milk from the same farm still can be sold.

“They don’t take the logical next step, which would be, why don’t you look at the milk?” said David Plunkett, senior staff attorney for food safety at the Center for Science in the Public Interest, a consumer advocacy group. “If they’ve got a problem with the dairy animals they’re sending to slaughter, it’s very likely they’re having a problem managing all the drugs for their dairy animals.”

In 2012, the agency collected more than 1,900 milk samples from dairy farms. About half of the samples came from farms with previous drug residue violations in dairy cows, according to an FDA statement.

The FDA tested the samples for 31 drugs compared to the four to six for which milk is typically screened.

So what did the FDA find?

The FDA finished collecting samples more than two years ago but it has not published the results of its survey. The agency denied a recent Freedom of Information Act request, filed by Plunkett, for its survey data. He’s currently waiting for the FDA’s response to his appeal.

Dairy industry officials interpret the protracted delay as a good sign. “We don’t think that they found anything terrible, because it’s been two years,” said Peggy Armstrong, vice president of communications for the International Dairy Foods Association. She said that FDA officials have not shared their findings with the industry, but that “they have been reassuring that there was nothing that required immediate action.”

The FDA has not only failed to release its findings, but it also won’t provide an estimate of when it will do so. In a statement, the agency said it is “unable to provide a specific release date at this time but is actively working to publish the report and remains focused on the goal of ensuring that the public can have the utmost confidence in the U.S. milk supply.”

Can you avoid drug residues by buying organic milk?

To be certified organic, milk must come from cows that have not been treated with antibiotics for any reason within the past 12 months. Some drugs, such as flunixin, still are approved for use in organic meat and milk but require a longer withdrawal period.

There might be something else in your milk besides milk

By Joanna Lin and Katharine Mieszkowski Reveal from The Center for Investigative Reporting February 24, 2015