Though threatened, grizzly bears can be killed to protect livestock 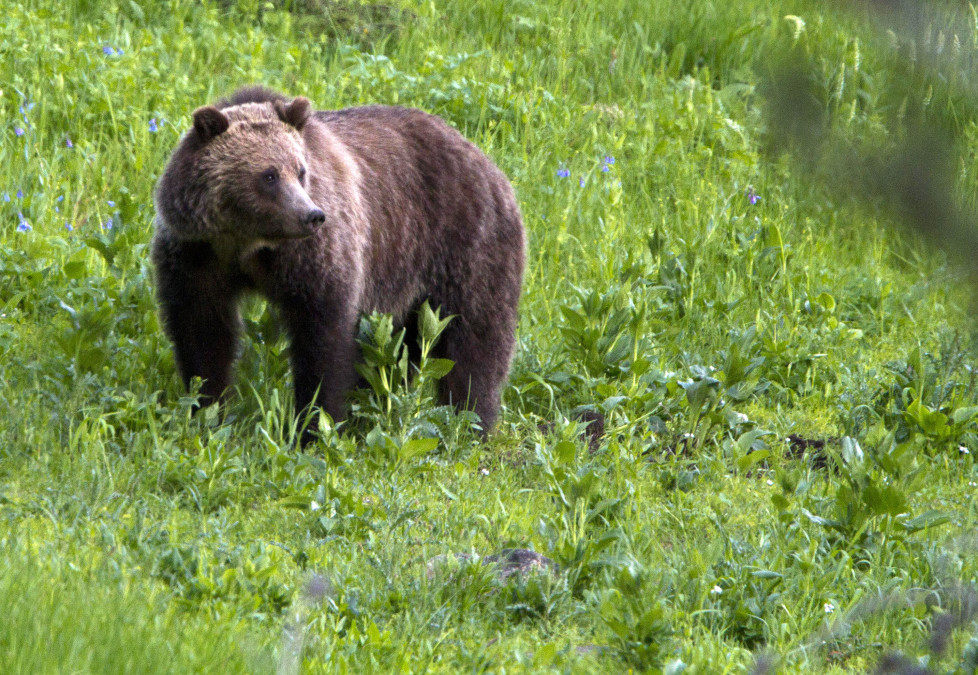 Environmental groups are concerned that the practice of killing grizzly bears to protect grazing cattle will harm the endangered population's recovery.

The grizzly bear is an iconic symbol of the American West.

Yet even though they’re classified as a threatened species, they still can be legally shot dead.

Each year, the U.S. Fish and Wildlife Service approves a certain number of grizzly bear killings. This is allowed when the bears pose a risk to humans or livestock.

Environmental groups are fighting back. On Jan. 14, the Sierra Club and the Western Watersheds Project issued a notice of intent to sue the Fish and Wildlife Service for violating the Endangered Species Act when it approved actions that would allow the killings of up to 11 grizzly bears in the Yellowstone region in a three-year period.

The crux of the issue is that the Fish and Wildlife Service granted the U.S. Forest Service continued approval to allow livestock grazing in the Upper Green River area in the greater Yellowstone region. And that approval came last year with permission to “take,” or kill, up to 11 grizzly bears due to conflicts with livestock. Grizzly bears roam about 19,000 square miles of the region.

The problem, according to the lawsuit, is that the Fish and Wildlife Service isn’t looking at the big picture. It says the agency did not consider the other anticipated grizzly bear killings in the area before approving the grazing-related grizzly bear takes.

The concern is that the total number of grizzly bear killings will harm the population’s recovery, said Bonnie Rice of the Greater Yellowstone Sierra Club.

The government has approved the killing of a total of 15 grizzly bears in the area, including up to four bears in Grand Teton National Park and the National Elk Refuge. The park and the refuge have been hosting annual elk hunts to help control the population, but the carcasses and gut piles can attract grizzlies. Hunters are allowed to shoot a grizzly bear in self-defense or defense of another person. Environmental groups also plan to sue over those bears.

When it comes to grizzly bears versus cattle, cattle sometimes win out – even on public land, such as the Yellowstone area’s Upper Green River watershed.

“These bears are killed primarily to protect private livestock grazing on public lands,” a Western Watershed Project statement says. “Grizzly bears are just one of many predator species killed to entrench cattle and sheep grazing on national parks and forests.”

Animals lower down the food chain also sometimes lose out to livestock. The sage grouse has been a flashpoint for years. And this month, a new conflict between domestic sheep and bighorn sheep began playing out in Wyoming. In Northern California, it’s organic dairy farmers versus tule elk.

Part of the underlying issue dates back to the 19th century: America’s open-access grazing policy. Ranchers have access to 235 million acres of public land and pay only a fraction of the market rate to graze livestock there. This is because after the Civil War, Congress wanted to fill up the “empty” West. The government made it easy for ranchers to make their living on public land.

Grazing on public land was never an enshrined legal right. But even after the federal government instituted a permitting system to combat overgrazing during the Great Depression, regulation and oversight used such a light touch that grazing on public land became a de facto right.

More than anything, it’s the government’s attitude toward grazing that’s a lord of yesterday.

“Actual range policy … still bears the mark of the 1880s,” wrote public lands law professor Charles Wilkinson in his book, “Crossing the Next Meridian.” “Too many decisions are effectively made by the hard-line element of the cattle industry. The range is run for cows.”

The U.S. Bureau of Land Management and the Forest Service, which together manage 98 percent of federal land open to grazing, are widely criticized by environmental groups for favoring grazing over all other uses of public grasslands, including wildlife preservation and recreation.

In the Upper Green River area, the Fish and Wildlife Service gave the Forest Service approval to grant grazing permits in what has become grizzly territory. In renewing that action, the agency sanctioned a lethal take over three years of up to 11 grizzlies if they come into conflict with cattle.

That number is on the rise. In 2013, the agency sanctioned a take of 11 grizzlies over any three consecutive years in the Upper Green River area between 2013 and 2017. Six were killed by mid-2014, leaving the possibility of five more approved takes for 2014 and 2015.

But in 2014, the Fish and Wildlife Service again approved a take of 11 bears over three consecutive years from 2014 to 2019. It essentially reset the clock, and the count, back to zero.

“The reason they’re doing that is because the number of conflicts is growing,” said Rice at the Sierra Club. “The number of bears that they anticipate to be killed keeps getting higher and higher.”

The number of conflicts is growing because grizzlies in the Yellowstone area are losing access to a main source of food, whitebark pine, Rice said. Whitebark pine usually grows at higher altitudes, which kept the bears farther away from humans and livestock. But as the pines disappear due to increasing beetle infestations, grizzlies are increasingly turning to meat – livestock from nearby ranches and gut piles and carcasses left behind by hunters.

Before 1996, grizzly bears weren’t in the Upper Green River area, according to Chris Servheen, the Fish and Wildlife Service’s grizzly bear recovery coordinator. As the population of grizzlies has recovered, their range has expanded. America’s open-access grazing policy, which dates back to the 19th century, has given ranchers access to 235 million acres of public land at a low cost.AP Photo/Wyoming Game and Fish Department

Ranchers say the killing of grizzly bears is simply part of the multiple-use mandate that governs how public lands are used. The law requires federal agencies managing public lands to balance competing uses on that land, whether it is wildlife protection, livestock grazing, recreation, logging or mining. One use cannot be favored above the others.

“Our position would be that when you have a thriving and even growing grizzly bear population, removing a few bears to maintain the viability to the livestock population is a good example of multiple use,” said Jim Magana of the Wyoming Stock Growers Association.

The problem, according to environmental groups, is that the grizzly bear population in the greater Yellowstone area appears to have stagnated at about 1,100. And if female grizzlies are killed, that could lead to a decline in the population.

“That 11 [bears approved to be killed] is a small part of 1 percent. To think that that’s a threat to the viability and welfare of the species is something that doesn’t make logical sense to us.”

Servheen emphasized that considering the number of cattle and grizzlies in the area, the number of conflicts are rare. But he and the Sierra Club’s Rice agree:

After a bear is shot, it is taken to a diagnostic veterinary lab for an autopsy. If the hide can be saved, it is tanned and used for education and outreach.

This story was edited by Robert Salladay and copy edited by Sheela Kamath.

Though threatened, grizzly bears can be killed to protect livestock

By Rachael Bale Reveal from The Center for Investigative Reporting January 30, 2015