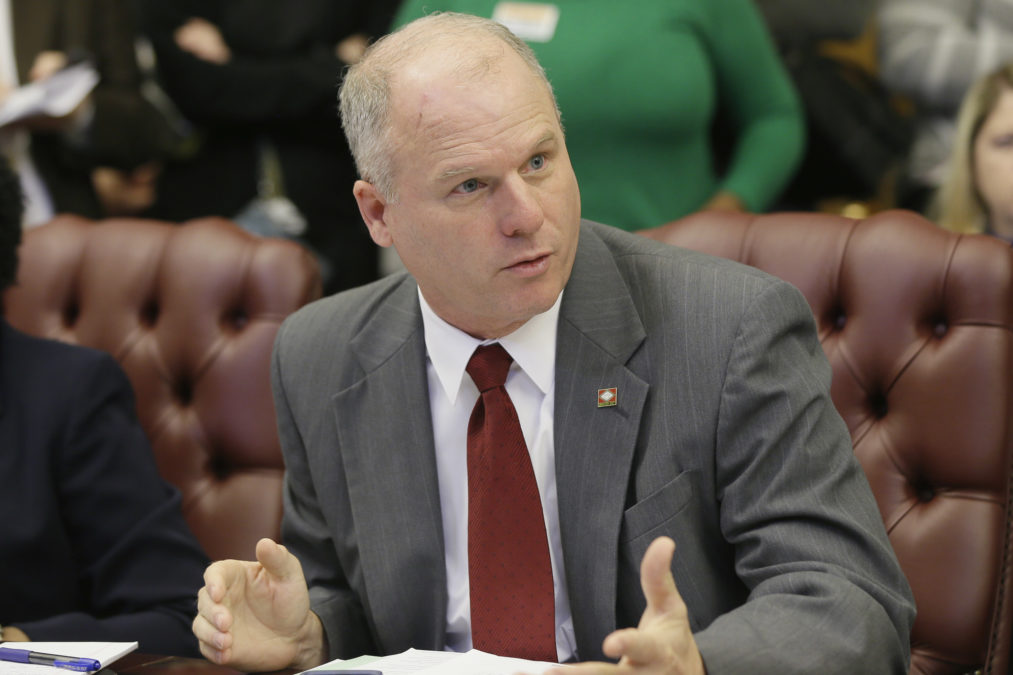 Jim Hendren, now the Arkansas Senate president pro tempore, used unpaid workers from a drug rehab program at his plastics company, Hendren Plastics, which has been ordered to pay back wages and damages.

One of Arkansas’ top politicians relies on unpaid workers from a local drug rehabilitation center at his plastics company, which makes dock floats sold at Home Depot and Walmart.

Hendren Plastics, owned by Arkansas State Senate Majority Leader Jim Hendren, partners with a rehab program under scrutiny for making participants work grueling jobs for free, under the threat of prison, according to interviews with former workers and a new lawsuit.

Courts from across Oklahoma and Arkansas send men to Drug and Alcohol Recovery Program, known as DARP, as part of a growing effort to divert offenders from overcrowded prisons and into treatment. But a recent investigation by Reveal from The Center for Investigative Reporting found that the rehab and others like it are little more than lucrative work camps for private industry.

Hendren’s involvement shows that the beneficiaries of these programs stretch from Fortune 500 companies to the highest levels of state political power.

At DARP, defendants receive little actual addiction treatment. Instead they work full-time jobs in factories and chicken processing plants. The companies pay a discounted rate to the rehabs for the labor, according to a lawsuit filed in Arkansas last week against DARP and a similar program, Christian Alcoholics & Addicts in Recovery, known as CAAIR. The men make nothing.

The unpaid work may violate state labor laws and the 13th Amendment ban on slavery, according to legal experts. Since Reveal’s investigation, CAAIR has become the subject of two other class-action lawsuits and three government investigations. CAAIR is modeled after DARP.

A number of former program participants confirmed that Hendren Plastics uses unpaid labor from DARP. Hendren is the company’s owner and president, a role that’s central to his political identity.

Hendren, a Republican, has called job creation his No. 1 priority in office and has long touted the economic benefit his company provides.

“I’ve been creating jobs for over 20 years,” Hendren says on his campaign website. “A country can not survive if it can not feed itself, and make things.”

Neither Hendren nor his company responded to calls or emails for comment.

In response to the lawsuit, Hendren told the Arkansas Times that he was proud to give  “kids in drug rehab programs a second chance.”

“While they are not employees of our company we pay the program for every hour they work consistent with all state and federal laws just as we do our other employees. We have also hired some to become full time employees upon completion of the program. It has been rewarding to see some of these kids turn their lives around,” he said.

Mark Fochtman was sent to DARP by an Arkansas drug court, according to court filings. At Hendren, he worked along a production line at the factory that melted plastic into dock floats and boat slips, according to an affidavit filed along with the lawsuit.

“The environment was very caustic working around melted plastics,” Fochtman said in the affidavit. “Because of the work environment, the turnover rate during my time was high.”

If DARP workers got hurt on the job and couldn’t work, they were often kicked out of the program and sent to prison, according to interviews with former participants, as well as the lawsuit. Others worked through the pain.

“Because of these threats, myself and other residents worked through sickness and injury to avoid being sent to prison,” Fochtman said.

Dylan Willis also worked at Hendren. He said his face, arms and legs are still covered with burn marks from molten plastic that shot out of a machine. DARP managers shrugged off his blisters as merely “cosmetic,” he said.

“They just gave me some Neosporin and told me I’d be all right,” Willis said.

Hendren comes from a long line of Arkansas politicians. He is Gov. Asa Hutchinson’s nephew and has worked as a Republican lawmaker for more than a decade. Hendren started the company with his father, Kim, who also is a member of the state Legislature.

Hendren Plastics’ website says it is “unashamedly for profit” and is “very proud of our people, our equipment and our culture of hard work.”

DARP has previously gotten in trouble with the state for failing to pay workers, who come from various corners of the criminal justice system.

In 2014, the Arkansas Department of Community Correction revoked DARP’s license to house parolees after discovering the program refused to pay workers minimum wage, a violation of state standards.

Arkansas prisons are no longer supposed to send parolees to the program. Courts, however, continue to send defendants there.

In a previous interview with Reveal, DARP President Raymond Jones said his rehab program keeps the money to pay for services. If participants complete six months, they are eligible for a gift of at least $500.

His program is “an opportunity to help people get their lives back on track, that cannot find an open bed at a rehab or a state and federal funded facility,” he said.

By Amy Julia Harris and Shoshana Walter Reveal from The Center for Investigative Reporting October 31, 2017