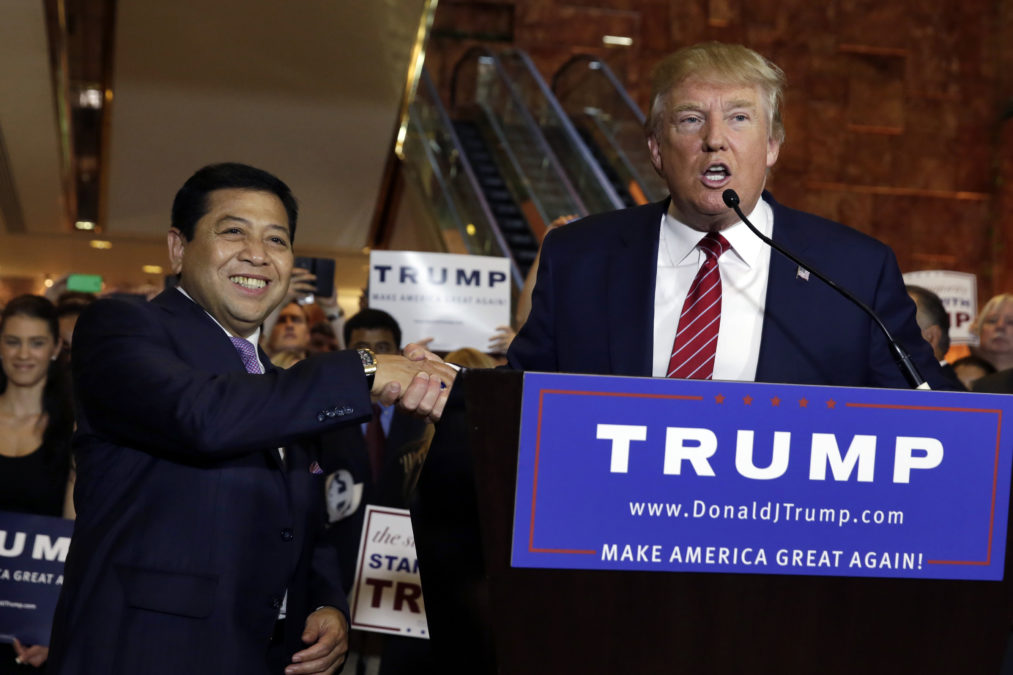 Donald Trump introduces Setya Novanto, then-speaker of the Indonesian Parliament, during a September 2015 campaign rally at Trump Tower in New York. Three months after the handshake, Setya, known as being “one of the most corrupt officials in Indonesia,” resigned from his post amid a $4 billion kickback scandal.

Two months after Donald Trump descended an escalator at his New York skyscraper to declare his candidacy for president, the billionaire real estate mogul was back at Trump Tower, signing a deal for his first resort in Asia: the Trump International Hotel and Tower Bali.

It had been a difficult week for Trump. Roundly excoriated for saying Fox News host Megyn Kelly had “blood coming out of her wherever,” fired as host of “The Celebrity Apprentice” and criticized by rival Chris Christie for not having the temperament or experience to be president, Trump was nonetheless all smiles during a signing ceremony with his new business partner, Indonesian media mogul Hary Tanoesoedibjo.

Trump’s comments cannot be heard in video of the event, broadcast by one of Tanoesoedibjo’s properties, Global TV Indonesia, but the two must have had a lot to talk about. Like Trump, Tanoesoedibjo – known as Hary Tanoe back home – is a politically ambitious purveyor of reality television. His wife, Liliana, serves as host, chairwoman and judge of the Miss Indonesia beauty pageant, which Hary Tanoe broadcasts on one of his channels. She also serves on the board of his holding company, the MNC Group, which oversees his development and media enterprises.

Like Trump, Hary Tanoe is an admirer of Russian President Vladimir Putin.

While Trump has weathered criticism for a lack of global experience, the Indonesian deal – and dozens of others – offer glimpses into his own brand of international relations and suggest how he might approach matters of foreign trade and diplomacy.

For veteran watchers of Indonesian politics, the timing of the deal – during Trump’s campaign for president – was disturbing and familiar.

“Until the rise of Trump, there had always been a significant gap separating the politics of oligarchy in the U.S. and a place like Indonesia,” said Jeffrey Winters, a political science professor at Northwestern University who specializes in Southeast Asia. “But now, the two countries are converging as a figure like Trump behaves in ways that mimic Southeast Asian oligarchs, who leverage their wealth power to gain high office, do things like threaten not to accept the outcome of the democratic process, and weave their children into their campaigns and involve them directly in politics.”

Three weeks later, as Trump fended off attacks from Republican rival Bobby Jindal that he was an “egomaniacal madman” and an “unstable narcissist,” he signed a second real estate deal with Hary Tanoe, this time for a 1,700-acre resort in the West Java town of Lido.

In a statement, Trump’s son Donald Trump Jr. proclaimed the Lido project would be a “spectacular development,” with the “the first Trump golf course in Asia as well as a world-class spa, luxurious hotel and residences.”

Trump’s deals in Indonesia were part of a pattern of global expansion for the real estate mogul as he ramped up to run for president. He has refrained from taking his foot off the gas during the campaign and even after winning the election.

When he was already well ahead in the delegate count in April, Trump inked a deal to build an office tower in India. Since his triumph at the polls, Trump has met with Indian business partners and reportedly objected to the development of wind turbines near one of his golf courses in Scotland with British politician Nigel Farage.

Trump-branded luxury projects are currently under construction from Uruguay to the United Arab Emirates.

He downplayed it all on social media Monday evening: “Prior to the election it was well known that I have interests in properties all over the world,” Trump tweeted “Only the crooked media makes this a big deal!”

Yet these projects provide the president-elect with a unique set of connections to real estate developers, bankers and politicians around the world, wrapping him in political entanglements that far outpace those of any other U.S. president.

In Colombia, a Trump-branded 72-story development is being financed by Yun Capital, which the Miami Herald reports “primarily manages Asian money, including funds from the government of China” – China, the country Trump has vowed to subject to hefty new tariffs. In Brazil, Trump’s hotel project is at the center of an emerging corruption scandal.

With Indonesia awash in corruption, it’s quite possible Trump could end up enmeshed in a scandal there as well.

“It is obviously the case that Trump, through his hotel business, is up to his ears in the Indonesian business world and the politics to which that is connected,” said William Liddle, a professor emeritus of political science at Ohio State University who focuses on Indonesian politics. “Probably nobody, local or foreign, does business of this scale in Indonesia without paying bribes.”

Trump’s business links with Hary Tanoe also have implications for internal Indonesian politics and business, where the main resource moguls use “in the competition with each other is their political connections,” Liddle said.

Trump appears to be ignoring suggestions from government ethics experts that he liquidate his real estate and place his fortune in a blind trust to avoid potential conflicts of interest. Instead, the president-elect has said he plans to place control of the company in the hands of his children.

Trump’s transition team did not return email and telephone inquiries for this story. His Indonesian business partner, Hary Tanoe, and his wife, Liliana, also did not respond to requests for comment.

But, like other international business partners of Trump’s, Hary Tanoe was quick to tweet his congratulations Nov. 9, posting a picture of the two billionaires together and predicting improved U.S.-Indonesian relations under a Trump administration.

On the campaign trail, Trump’s business interests in Indonesia had surfaced regularly, sometimes in unusual ways.

A week before he inked his second resort deal with Hary Tanoe in 2015, Trump closed a campaign rally at Trump Tower by bringing the speaker of the Indonesian Parliament, Setya Novanto, up to the podium.

“This a very, an amazing man,” Trump told the crowd. “We will do great things for the United States,” he added, before asking Setya, “Is that correct?”

In the Indonesian media, it was widely reported that Hary Tanoe had introduced Setya to Trump. But the appearance left many observers scratching their heads.

“It was a strange scene because Setya Novanto is widely regarded as being one of the most corrupt officials in Indonesia,” Liddle said.

Three months after appearing with Trump on the podium, Setya resigned amid scandal. He had been caught on tape demanding a $4 billion kickback from an official with an international mining company, Freeport-McMoRan Inc., in exchange for continued parliamentary approval for its gold and copper mining operations.

Now that Trump has won, his business relationship with Hary Tanoe might turn into a political one as well.

Hary Tanoe came to prominence in his country nearly 20 years ago, when he began scooping up television stations owned by the children of Gen. Suharto, Indonesia’s long-ruling dictator, overthrown in a popular uprising in 1998. His wealth expanded as he diversified into real estate, toll roads and financial services.

The Indonesian mogul has sought power for years, too, though he’s found it elusive, in part because he is an ethnically Chinese Christian in a country that is overwhelmingly Malay and Muslim.

In 2014, he ran for vice president of Indonesia on a ticket with Gen. Wiranto, the final military chief under Suharto, who has been indicted for crimes against humanity by a United Nations tribunal.

Hary Tanoe reportedly bankrolled the campaign, but the duo failed to garner more than 5 percent of the vote. So the following year, shortly before his dealings with Trump began, Hary Tanoe decided to found his own political party, called “Perindo,” which means “unity.”

Some observers expect he will continue to try to succeed in politics – especially now that he has a friend in the White House.

“He’s a very wealthy man who can fund his own political party,” Liddle said. Despite his failure to generate electoral support so far, Liddle added, “we can expect that he will contest for the presidency in 2019.”

By Aaron Glantz Reveal from The Center for Investigative Reporting November 22, 2016