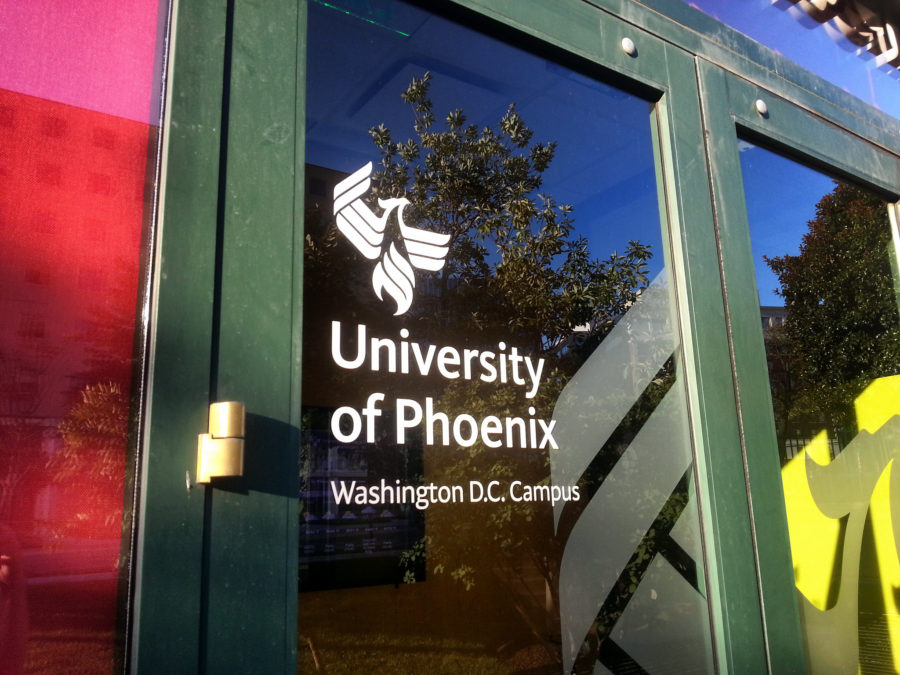 The U.S. Department of Veterans Affairs has announced that it intends to forbid the University of Phoenix and three other institutions of higher education from enrolling new students using the GI Bill.

The U.S. Department of Veterans Affairs announced Monday that it intends to forbid the University of Phoenix and three other institutions of higher education from enrolling new students using the GI Bill, citing a decades-old law that bans veterans’ benefits from being paid to any school that “utilizes advertising, sales, or enrollment practices of any type which are erroneous, deceptive, or misleading.”

The move follows a record $191 million settlement between the for-profit college and the Federal Trade Commission in December. Under the terms of that agreement, the University of Phoenix and its corporate parent, Apollo Education Group, agreed to pay $50 million in cash and cancel $141 million in student debt to settle federal charges alleging it marketed false job opportunities to students, including veterans and active members of the military. The University of Phoenix did not admit to any wrongdoing.

“It’s about time,” said James Adams, a two-tour Iraq War veteran who told Reveal that he enrolled at the University of Phoenix after what he describes as a “pressure campaign.”

“They kept calling and calling,” Adams said, “until I finally broke down and said I’d go to the school.”

“I wish they’d done this earlier,” said Larry Casteel, a former Army specialist who served in Iraq and Afghanistan. Casteel said he’d exhausted his entire GI Bill benefit and taken out $80,000 in student loans to obtain a bachelor’s degree and then a master’s in business administration from the private college.

Like Adams, Casteel said he’s currently unemployed. “A lot of times, I don’t even put the University of Phoenix on my application because I get looked at weird,” he said. He thought with the MBA, “I’d be able to do something.”

The school also claimed to have special partnerships with companies, including AT&T and Allied Barton, that allegedly had set up hiring programs for University of Phoenix students who were veterans. In fact, the FTC said, those programs were available to all veterans, not only those who attended the University of Phoenix. Under a GI bill passed after 9/11, the most generous since World War II, the federal government would pay up to 36 months of the full tuition and fees at any public college or university for nearly all veterans who served in Iraq or Afghanistan – or an equivalent amount toward the cost of attending a private school.

The FTC launched its probe in July 2015, following an exposé by Reveal from The Center for Investigative Reporting and PBS NewsHour, which documented how the for-profit college had sidestepped an executive order from President Barack Obama designed to halt predatory recruitment of service members and veterans.

Those practices, Reveal found, helped make the University of Phoenix the largest single recipient of GI Bill funds. Since 2009, VA records show the company has received at least $2.1 billion under a program to provide a better future for Iraq and Afghanistan veterans. According to the VA, nearly 15,000 Iraq and Afghanistan veterans enrolled in classes at the University of Phoenix’s online campus in 2018.

In making its announcement, the VA said it would suspend new student enrollment at the University of Phoenix and the other three programs in 60 days unless they take “corrective action.”

The University of Phoenix did not respond to phone calls or emails from Reveal, but in a statement to the Arizona Republic, it said it would “respond expeditiously to the VA’s teams that are handling the review process and we are working to assure no disruptions to existing or new students, now or in the future.”

Carrie Wofford, president of Veterans Education Success, a nonprofit that advocates for government benefits to be spent on quality education, said of Reveal’s reporting: “If you had never exposed it, it would never have happened. Your exposé, that was brutal.”

The VA’s action represents a rare rebuke to the for-profit college industry. At the Department of Education, Secretary Betsy DeVos has rolled back an Obama-era regulation that cut off federal student aid to for-profit colleges whose graduates could not find gainful employment. And she drastically reduced federal debt forgiveness programs for graduates who were misled by fraudulent claims by institutions of higher education.

Under President Donald Trump, the VA also has sided with for-profit colleges against consumer and veterans advocates. Last year, the VA stripped the State of California of the right to regulate which schools are eligible for GI Bill funding in the state after a dispute with Ashford University, a for-profit online school whose certification had been put on hold pending a lawsuit by the state attorney general over predatory practices.

In September 2017, the Trump administration sought to waive a 50-year-old anti-corruption law that prevented officials who administer the GI Bill from accepting money from for-profit schools backed by taxpayer subsidies. The VA backed down after coverage by Reveal and pressure from five U.S. senators.

But Wofford said the trade commission’s $191 million settlement with the University of Phoenix left the VA little choice but to enforce the law.

“The law is clear,” she said. “Colleges found to use erroneous, deceptive and misleading recruiting practices cannot receive money through the GI Bill.”

The VA enforcement action against the University of Phoenix on Monday also swept up three other institutions: Bellevue University, Temple University and Career Education Corp., the parent company of Colorado Technical University and American InterContinental University. In all four cases, the VA found evidence that the schools deployed “erroneous, deceptive, or misleading” sales practices.

“Our aim in taking this action,” VA Secretary Robert Wilkie said in a statement, “is to protect Veterans and their dependents’ GI Bill benefits and comply with the law.”

The plan to suspend GI benefits applies only to new students. Veterans currently enrolled at any of these institutions still will be able to receive government subsidies for their studies. “The department is committed to helping beneficiaries avoid any negative consequences that may result,” Wilkie said.

By Aaron Glantz Reveal from The Center for Investigative Reporting March 10, 2020