Donate
The Secrets of the Drought 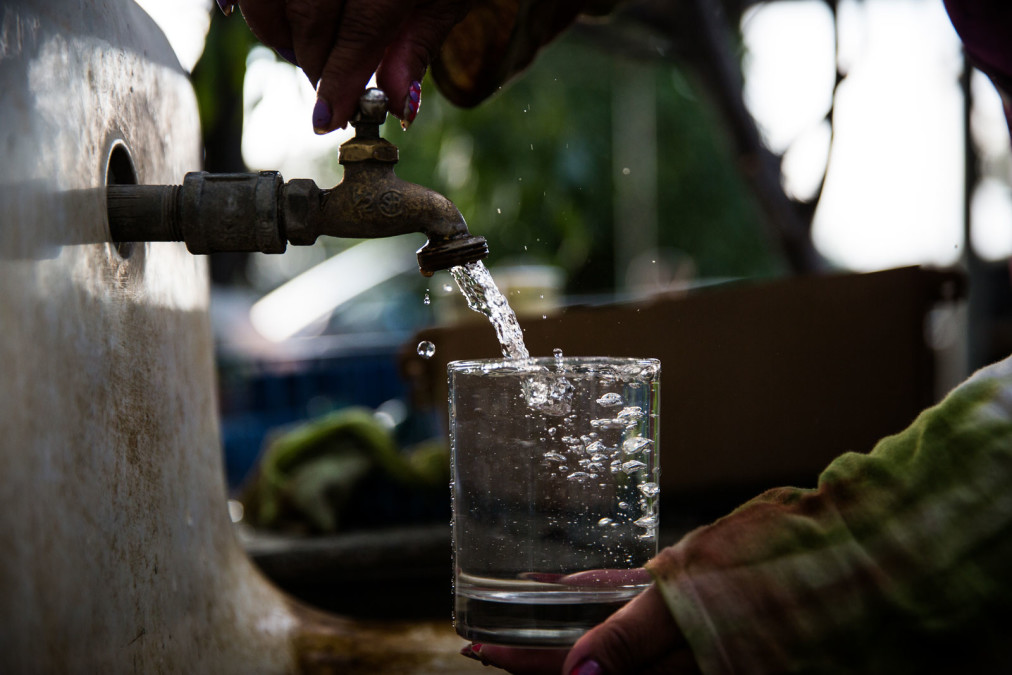 Lupe Varella pours water at her home in Porterville, Calif. The water from her well turns yellow soon after it’s pumped and leaves white splotches on her skin. Although Varella lives in the city of Porterville, she says she can’t afford to hook up to its water system.

EAST PORTERVILLE, Calif. – For decades, Racie Jeffers grew or raised nearly everything she ate: nectarines, grapes, cattle and pigs. Then the drought hit. The roots of her trees shriveled, her pasture turned brittle. She chopped her orchard to stumps and gave away her animals.

The well that brought water to Jeffers’ home for 36 years coughed out its final drops last January. For eight months, she got by on barrels of water pulled from a friend’s well, ladled by buckets into her home. Then, in September, a 3,000-gallon tank parked in front of her house began pumping water to her faucets.

Water delivery trucks fill the dark green, cylindrical tank for free every week under a state and county program. The tank is meant to be a stopgap, but Jeffers may rely on it for the foreseeable future.

What began as an emergency response to the drought has dragged on and on. A year after the first tank was installed, tanks are now the primary source of water for more than 540 households in Tulare County, the epicenter of California’s four-year drought. In East Porterville, a poor, unincorporated community near the Sierra Nevada foothills, the outlook is particularly bleak.

Jeffers, a retired cook who lives on Social Security benefits, can’t afford the $20,000 for a well driller to chase the sinking water table below her land. Because she lives outside city borders, her home is beyond the reach of their water pipes. The tank is the only way she can bathe, do her dishes and wash her laundry unless water returns to her well.

Long-term solutions, such as connecting residents to public water systems whose infrastructure and scale make them more resilient than shallow wells, take time to develop. They also require funding that local communities don’t have.

Meanwhile, demand persists: More than 1,000 well failures remain unresolved. The residents who rely on these wells don’t have tanks – and even if they did, the county doesn’t have enough water to fill them. Nearly 1,800 wells have been reported dry in Tulare County, Calif. More than 540 households there now rely on state-funded tanks as their primary water source.Credit: Max Whittaker for Reveal

Only four suppliers are currently able and willing to sell the county water for the tank program. Most of the county’s 100 drinking water systems are small, serving, at most, only a few hundred people. Those systems also are struggling to meet customers’ water needs, said Denise England, the county’s water resources program manager.

The tanks currently use about three-quarters of the 5.2 million gallons of water the county can buy each month from its suppliers. By February, given the county’s projected demand, only one supplier will still have water to spare for new tanks.

Tulare County could buy an additional 1.6 million gallons of water each month from California Water Service in Visalia – enough to serve nearly 1,100 more people. But the county couldn’t send that water to nearby communities in need of more because state law prohibits public utilities such as Cal Water from operating outside their approved service areas.

To help meet that demand, trucks haul water instead from a state-owned well farther away, where the county is allowed to pump 1 million gallons each month.

The water itself is cheap – no more than a penny per gallon – but moving it is pricey. The state, which is covering most of the tank program’s costs with disaster aid funding, has spent more than $3.4 million on hauling water to tanks throughout the county.

“Paying millions of dollars in trucking costs – is that the best way to address the issue?” England said.

California’s disaster aid can’t be spent on long-term solutions such as extending public water systems or drilling wells, although other state and federal funds can provide grants and loans for such projects. The tanks are intended to bridge the gap until those dependent on wells find long-term solutions.

England would like to see as many residents as possible connect to existing public water systems or form new ones. For people in especially rural areas, drilling deeper may be the only option. All of these plans require time and money, and in some cases, political organization.

“It’s not acceptable for your long-term plan to be a tank,” she said. “We don’t want to get a situation where the new norm is the county puts a tank out in front of your house.”

Yet tanks may already be the norm: The county installed its first tank one year ago, and it’s still in use. It’s taken just 52 tanks offline because residents no longer needed them.

“This is certainly still an emergency,” said Eric Lamoureux, the inland regional administrator for the Governor’s Office of Emergency Services. More than 2,600 wells in the state are reported as dry.

About 900 tanks have been installed in nine counties – nearly all in the San Joaquin Valley, where 2 in 5 adults struggle to buy enough to eat despite the bounty of fruits, vegetables and nuts that spring from the region’s fertile soil.

Lamoureux said he’s confident that the state and counties will be able to find additional water to fill tanks as long as tanks are needed. The state-owned well in Tulare County, for example, could be tapped for more water, he said. A local nonprofit donated and installed a 265-gallon tank at Socorro Ambriz’s house in East Porterville, Calif. Every week, Ambriz’s brother fills three 55-gallon barrels at a nearby water station; he makes two trips so her family of four can shower, flush their toilets and wash dishes.Credit: Joanna Lin/Reveal

The need for more water is already here: County supervisors voted last month to expand the tank program to rental properties. Because the state considers rental properties to be businesses, it’s asked more of landlords who participate in the tank program. Under previous state guidelines, landlords could receive tanks only if they stopped charging rent while tanks were in use.

The county’s inclusion of rental properties follows negotiations with the state to make the tank program more accessible to landlords and their tenants. To get a tank for free from Tulare County, landlords would need to first pay $100 for a building permit. They then would need to certify that they cannot afford the tank and installation, which typically cost between $2,500 and $3,000 altogether. Only current tenants could receive free water deliveries, and, without permanent water supplies, properties could not be rented to new tenants.

Socorro Ambriz has wanted a tank for her family of four since their well went dry in July.

“Without water, I can’t do anything,” she said in Spanish. “We need water for everything – I can’t shower, I can’t wash dishes.”

Unable to drive and without a car, Ambriz relies on nearby family members to help her fill a boxy, translucent, 265-gallon tank that sits behind her pink single-story home. Once a week, her brother hauls three 55-gallon barrels to a nearby water station, making two trips so Ambriz has enough water until he can return.

Ambriz pumps the water from each barrel into the tank, which a local nonprofit donated and installed. The tank then pumps the water to her bathroom and kitchen sinks, toilets and shower. It’s not a lot, but the family is frugal; they take their laundry to a laundromat, wash their dishes in two large tubs and shower at home every other day.

Ambriz’s landlord, Alvaro Alvarez, is required by state law to ensure that her house is habitable, a health and safety standard that includes working plumbing facilities with hot and cold running water. He knows that Ambriz and her family don’t have running water. But he said they have chosen to stay and are getting by just fine – they’ve managed to get water for themselves for months.

“If they weren’t happy,” he said in Spanish, “they would have already left.”

This story was edited by Jennifer LaFleur and copy edited by Sheela Kamath.

By Joanna Lin and Emmanuel Martinez Reveal from The Center for Investigative Reporting January 5, 2016