Weak oversight of public grazing land, thanks to ‘lord of yesterday’ 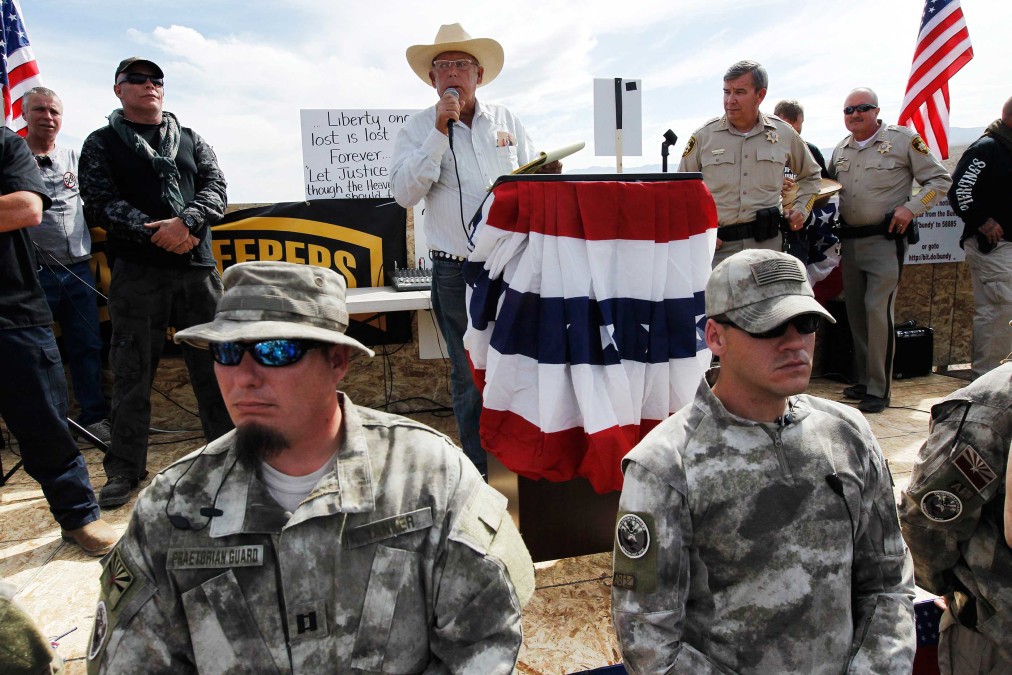 Remember Cliven Bundy? He’s the Nevada cattle rancher who hasn’t paid his grazing fees in decades. After years of warnings, federal employees came last year to impound his cattle. They were met with an armed showdown.

Today, Bundy is still running his cattle on public land, and he still hasn’t paid the more than $1 million the government says he owes.

And the issue of who gets to take advantage, and control, of federal lands remains a major issue for conservatives, even if news coverage of the Bundy incident has subsided.

If Bundy and others had their way, federal grazing land would be turned over to the states. In fact, Republican-led efforts to justify or encourage state seizure of federal lands, orchestrated in large part by the American Legislative Exchange Council, have been gaining headway in some state legislatures, as reported by Harper’s Magazine in its February issue. ALEC has produced eight model public land bills for state legislators to adapt and introduce in their congresses. In the past couple of years, some half-dozen Western states have considered such attempts to wrest control of public lands from the federal government.

For many Americans, the Bundy standoff was one of the few times they’d given a second thought to livestock grazing on public land. But for many ranchers, Bundy’s beliefs weren’t a shock. In fact, his decision to ignore federal grazing laws and his belief that he has an absolute right to graze on public land without regulation is a holdover from the rise of Western ranching in the 19th century.

After the Civil War, it was miners, followed by ranchers, who flocked west. Wanting to encourage development, the federal government passively allowed ranchers to run their cattle on public land. Ranchers used coercion and sometimes violence to take over more and more land from homesteaders. With the absence of regulation, the privilege of grazing on public lands became an implied right.

Over time, the government began to realize that this totally unregulated grazing was destroying the high plains. It was during the Dust Bowl – as Midwestern dust from trampled plains was literally falling on Washington – that Congress passed the first law requiring permits for grazing on public lands. Grazing fees were low, however, and the government largely continued its hands-off approach. In the second half of the 19th century, cattle ranchers flocked West to take advantage of public grazing lands.

10 things to know about grazing on public lands

That’s about 367,000 square miles – more land than that of California, Oregon and Washington combined. The U.S. Bureau of Land Management is in charge of about 155 million acres of the grazing land, according to a 2014 BLM fact sheet. Together, the BLM and the U.S. Forest Service manage about 98 percent of the country’s grazing land.

OK, it’s not an official subsidy, but what do you call it when the government only charges you $1.35 to graze your cow and her calf each month when the private market rate is more like $18?

Sustainable grazing definitely exists. But overgrazing and many conventional grazing practices pose risks to the environment

The BLM and the Forest Service dropped the price of grazing fees by 40 percent from 1980 to 2004. As that fee dropped, private ranchers’ grazing fees rose by nearly 80 percent, according to the Government Accountability Office. By 2004, the GAO found that public grazing fees were covering less than a sixth of the federal government’s cost of managing that land. Ultimately, the report concluded, Congress needed to decide whether to base grazing fees on recouping costs, fair market value, or something else entirely, such as supporting the ranching industry. If the goal were to break even, the BLM would need to raise fees from the 2004 rate of $1.43 to $7.64, the report estimated. A decade later, grazing fees are holding steady at $1.35.

The Forest Service manages about 75 million acres of grazing land, including in national forests.

National seashores and national recreation areas are often open to grazing. At Point Reyes National Seashore north of San Francisco, for example, tensions are rising between organic dairy cattle ranchers and advocates of the tule elk, found only in California.

Maintaining your permit to graze on public lands is such a sure bet that many banks accept it as a form of collateral. Permits are granted in 10-year intervals, and as long as the rancher stays in the government’s good graces, renewal is pretty much guaranteed. Permits are often passed down from generation to generation. The IRS even assigns them monetary value, based on market rates, for tax purposes.

Nearly a third of rangeland failed to meet BLM standards due to the impacts of livestock, according to a map by Public Employees for Environmental Responsibility using BLM data. The BLM disputes the accuracy of the map.

“In spite of the impressive amount of on-the-ground data showing the poor condition of the land, BLM officials have continued the time-honored system of deferring to the ranching industry,” wrote Charles Wilkinson in “Crossing the Next Meridian.”

On one side, you have the cattle industry. It has had more than 100 years to develop its legislative power. These are people fighting for their livelihoods and way of life. On the other, you have conservationists and outdoorsmen, who are considerably less organized and have less time to devote. Plus, the actual on-the-ground government regulators live in the same communities as the people they regulate.

“They’re the ones who have to meet the ranchers on the street and in the grocery market. It’s not pretty when there’s real conflict,” Wilkinson told Reveal. “That’s a pressure that helps the current system stay roughly in place.”

This story was edited by Robert Salladay and copy edited by Stephanie Rice.

Weak oversight of public grazing land, thanks to ‘lord of yesterday’

By Rachael Bale Reveal from The Center for Investigative Reporting January 27, 2015