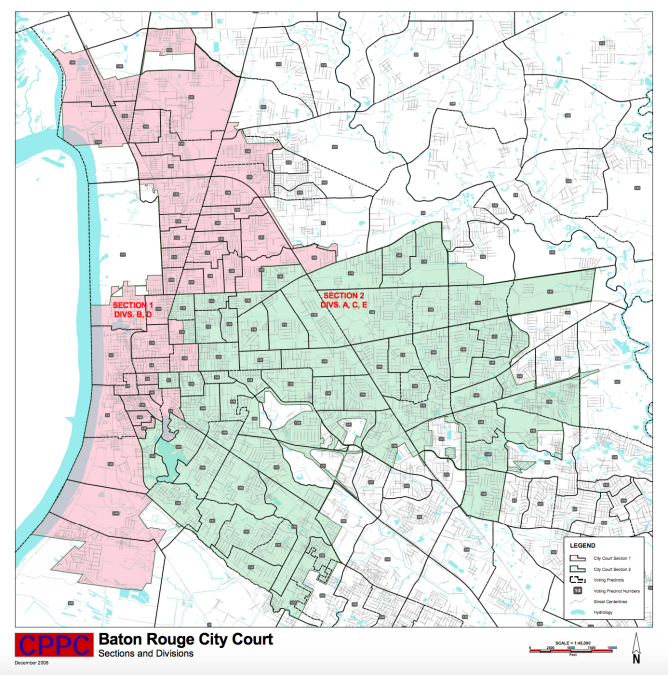 Before Baton Rouge, Louisiana, was in the national spotlight for the recent killings of Alton Sterling and three police officers, it was the city’s court system that was at the center of a prolonged battle over race.

In 2012, Baton Rouge residents Kenneth Hall and Byron Sharper filed a federal civil rights lawsuit against the state of Louisiana, saying the system for electing city court judges was discriminatory. They argued that Baton Rouge’s districting system – enacted in the 1990s when the city was majority white, resulting in three white districts and two black ones – violated the federal Voting Rights Act and diluted African American voting strength in the city. The five-member elected city court handles misdemeanor, small claims and traffic cases.

The situation in Baton Rouge is not unique. According to “The Gavel Gap,” a new study by the American Constitution Society, state court judges around the country are disproportionately white and male, creating a striking difference between the composition of the courts and the communities they serve. State court judges hear more than 90 percent of all judicial matters in the country, dealing with everything from landlord disputes to custody battles and traffic violations.

In the study, researchers compiled biographical information for over 10,000 sitting judges and compared the proportion of women and people of color in each state’s courts to the state’s population. They found a significant disparity, which they labeled “the gavel gap.”

People of color make up 20 percent of state judges but are 38 percent of the population. In Vermont, North Dakota, Maine and New Hampshire, every judge on the state bench was white, according to the study, which looked at demographic data in December 2014.

North Dakota is one of the least representative states, earning an F rating for how poorly its state court judges reflect its demographics. For example, people of color make up 16 percent of the state’s population, but not a single minority judge sits on the state bench. White men, meanwhile, represent 41 percent of North Dakota’s population but account for 78 percent of state court judges. The rest are white women.

Even though half of America’s law students are women, that equality hasn’t translated to judgeships. No state has as many female judges as it does male.

“The vast majority of Americans’ interactions with the judicial system, ranging from traffic violations to criminal proceedings, happen in state courts,” said law professor Professor Tracey E. George of Vanderbilt University, one of the authors of the report. “When people do not see themselves represented in their community leadership, when the vast majority of judges cannot relate to the lived experience of those they serve—this is a problem. It creates a mistrust of judges, and propagates the mystery surrounding the court system.”

For years, people in Baton Rouge implored the state Legislature to redraw the district lines to respond to the evolving demographics of the city. Lawmakers took up the issue several times, but reform attempts went nowhere. In the 2013 and 2014 legislative sessions, three House bills were introduced to amend Baton Rouge’s city court districting plan. None of them passed.

In June of last year, a federal judge ruled against the two Baton Rouge residents who filed the civil rights lawsuit. Judge Brian A. Jackson said that while the intent of Baton Rouge’s districting system was not discriminatory, it did result in “de facto discrimination” against African Americans.

“It is clear to the Court that, regrettably, the state legislature has thus far failed to adapt the City Court election system to adequately protect the voting rights of all Baton Rouge residents,” Jackson wrote in his opinion.

Nevertheless, Jackson said it was not up to the courts to fix the problem.

“In this particular case, at this particular time, the prerogative lies with the legislature, not with the Court, to redistrict the City Court of Baton Rouge in accordance with the principles of constituent representation that should be strived toward in any elected body,” he wrote.

A few weeks after the judge’s ruling and after years of failed efforts, the Louisiana Legislature finally came up with a solution to restructure the way Baton Rouge’s city court judges are elected.

Williams eventually backed down from his proposal and urged his colleagues to vote for the Senate version of the bill.

“It’s not what I want but after discussions with a number of judges and others in the community that (the 2-2-1 Claitor plan) is what they recommended that we do,” Williams said in an interview with The Advocate.

After the most recent election in October, Tarvald Smith, who is African American, won the newly created at-large seat, giving Baton Rouge a majority black court for the first time in more than two decades.

By Amy Julia Harris Reveal from The Center for Investigative Reporting July 22, 2016