Why some religious scholars say prayers are wasted on Super Bowl 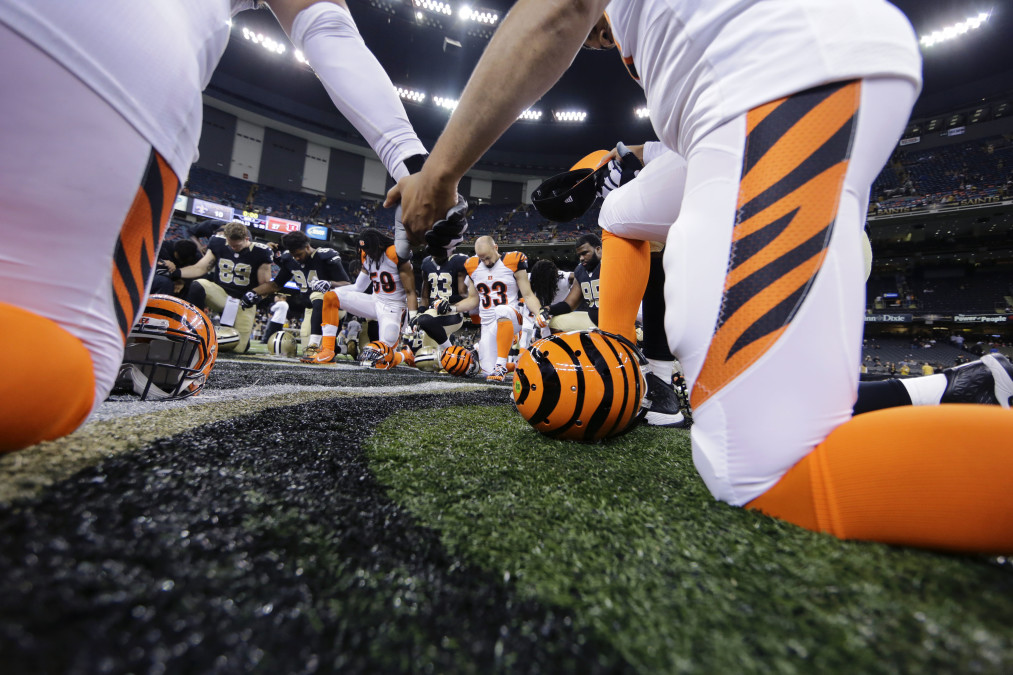 Cincinnati Bengals and New Orleans Saints players hold a prayer circle after a game in New Orleans on Nov. 16.

When fans pray during Super Bowl XLIX, will Satan be guiding their lips?

“If your team doesn’t win, then the Bible’s not true, right?” he asked. “The way people would affirm the notion you can pray for your sports team, and that’s supposed to have an effect, that’s outside the boundaries of what Christians would view as biblical teaching.”

Jones is an associate dean at the Southeastern Baptist Theological Seminary in Wake Forest, North Carolina, and is a prominent critic of the idea that Christian faith can bring material success. But with the Super Bowl approaching, he and other religion scholars seem to be in the minority.

Last week, the Public Religion Research Institute released a survey showing that 53 percent of respondents agreed with the statement: “God rewards athletes who have faith with good health and success.” This was up from 48 percent in 2014.

That belief, which says faith can produce worldly success, goes by names such as “prosperity gospel,” “gospel of success” or “health and wealth” gospel. Evangelists such as Oral Roberts and Joel Osteen helped popularize it. And it’s become endemic to many people’s understanding of Christian thought, according to Jones’ 2010 book, “Health, Wealth & Happiness: Has the Prosperity Gospel Overshadowed the Gospel of Christ?”

But it’s dismissed as heresy across a spectrum of traditional U.S. Christian thinkers, including mainline progressives, conservative evangelicals and secular academic scholars of religion.

“This is as profoundly an unscriptural interpretation of Jesus that exists,” University of California, Riverside professor Reza Aslan said during a speech last summer. He’s written about what historical evidence tells us about the lives of Jesus and Muhammad and argues that rejecting material success is indisputably at the heart of Jesus’ message.

Jones says the prosperity gospel gained momentum during the early 20th century, when leaders of the positive thinking movement wed their ideas to Christianity to gain broader acceptance.

As evidence that the two philosophies are a bad marriage, Jones notes that Jesus and the apostle Paul were material failures.

Jesus is “wandering around without a home, without a fixed income,” Jones said. “He lived an austere life. Paul as well: He spent time in prison, beaten, stoned, shipwrecked. If good Christians are blessed with wealth and health because they are followers of God, we would expect Paul and Jesus to have at least half of that.” Jones did not address the question of whether Jesus might have led the disciples to victory over the New England Patriots or Seattle Seahawks. And his teachings don’t offer much solace for a fan in desperate need of a first down.

For that fan, William Lane Craig, a philosophy professor at the conservative Talbot School of Theology in suburban Los Angeles, offers more inclusive guidance. One might call it the gospel of “it couldn’t hurt.”

“Nothing happens without either God’s direct will or at least his permission of that event,” he told Christianity Today. “That includes every fumble, every catch, every run.”

Matt Smith can be reached at msmith@revealnews.org.

Why some religious scholars say prayers are wasted on Super Bowl

By Matt Smith Reveal from The Center for Investigative Reporting January 28, 2015