Why we’re focusing on voter suppression and fraud 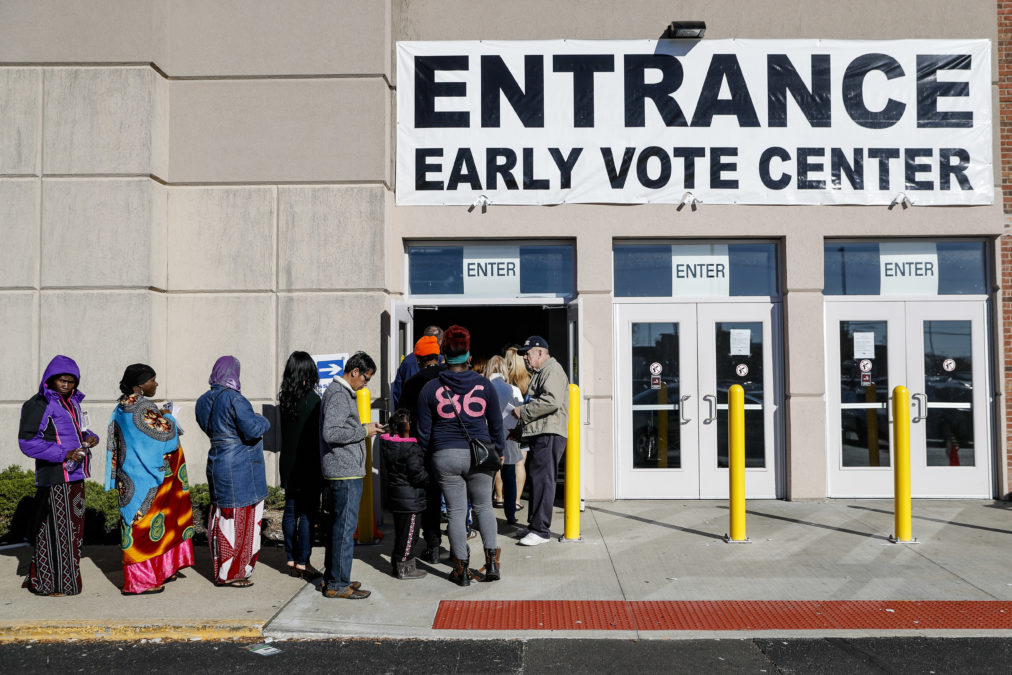 There was heavy turnout in Columbus, Ohio, Monday as early voters take advantage of their last opportunity to vote before Election Day.

This election has come to be defined by so many different and often bizarre things. But, in these closing days, the focus has shifted from candidates and their positions to a more basic issue: access to the ballot box.

Donald Trump and his surrogates have already said that, if he doesn’t win, it will be because of widespread voter fraud. His campaign is actively working to stop people from voting. They’re instructing supporters to head to cities to stand watch over voters.

This all comes at a time when voting rights are already under siege in a way they haven’t been since the civil rights movement. A new wave of laws that make it harder for people of color and the poor to vote have been enacted in states across the country, thanks in part to a 2013 Supreme Court ruling – known as the Shelby decision – that gutted a key section of the Voting Rights Act.

We’ve been investigating voter fraud and voter suppression in the runup to the election. It will continue to be our focus this week on our website and on our next episode of Reveal, which will go live on Saturday.

If you see voting problems, please bring them to our attention. Email me adonohue@cironline.org or tweet us @reveal.

Here’s a rundown of what you should know about voting shenanigans across the country and what we’ll be keeping an eye on. To get caught up, also listen to our two recent podcasts: Voting rights – and wrongs and How to (really) steal an election.

In Wisconsin, a judge said Republicans discriminated against minorities. In North Carolina, the court found the smoking gun, saying that the law passed by Republicans targets “African-Americans with almost surgical precision.”

Likewise, Texas courts have found that its voter ID law was blatantly discriminatory and that the stated reason for the law – to combat voter fraud – was bunk.

Here’s a passage from the district court ruling:

The district court found the Texas voter ID law to be discriminatory. (p. 62)
View entire document on DocumentCloud
The Texas case also made clear that voting rights aren’t just an African American issue. There, Hispanic voters, who have the potential to rapidly reshape the political map in Texas, were three times more likely to not have the proper ID than white voters.

Some remnants of the laws remain, not the least of which is confusion. And Wisconsin and North Carolina are both swing states.

North Carolina, which is key to the presidential race and control of the Senate, has become a hotbed of voting rights issues.

Seventeen counties have reduced early voting hours since 2012, resulting in long lines already. And on Friday, a federal judge reinstated the voting rights of thousands of residents, saying they’d been illegally purged from the rolls just weeks before Election Day.

North Carolina allows citizens to challenge each other’s voter registration. A coordinated effort by Republicans in three counties there led to the purging of more than 4,000 voters, many of them African American. The North Carolina judge called the law an “insane” remnant of the past. But most states have some version of the same law, many of them specifically designed to keep African American voters from voting.

Similar stories are playing out in states across the country. There are too many to list here, and they keep changing by the hour. But here’s a sample of those we’re following:

We’re nonpartisan here at Reveal from The Center for Investigative Reporting and we investigate politicians on all sides. But there’s no way to sugarcoat this: Disenfranchising voters of color helps one party and hurts another. The efforts to make voting harder have been led by Republicans, and some have even admitted they’re doing so to keep people of color from voting.

We believe the following things: Voting is a basic right. The reasons for curtailing voting rights should be based in fact, not myth. Specific groups of people shouldn’t be targeted.

The party that’s making the claim that the election is being stolen is actually the one engineering the large-scale effort to keep legitimate voters away from the polls.

There are concerns that the monitoring could lead to violence or intimidation, particularly because of the presence of a group that likes to show up armed at tense moments, the Oath Keepers. (The eye patch certainly doesn’t do anything to ease concerns.)

Other groups, like Stop the Steal, led by conservative activist Roger Stone, have promised that they’ll just be asking questions of people who voted. We’ll be tagging along with a couple of Trump supporters who’ll be doing the poll watching.

To stop it, Congress passed the Voting Rights Act in 1965 after the “Bloody Sunday” march in Selma. The law was designed to put an end to the nefarious techniques local officials used to keep African Americans from voting – things like poll taxes and literacy tests.

One section in particular has become important this election year. It’s called preclearance. Before the Voting Rights Act, state officials would create new laws that made it harder for African Americans to vote. Those laws eventually would be struck down by courts as unconstitutional. But the legal cases would take years to come to a conclusion. In the meantime, elections would happen with those laws in place. People who should’ve been able to vote couldn’t.

Lawmakers created preclearance to keep states from being able to play this game of legal whack-a-mole. It looked for states with a history of voter discrimination and low turnout among the group that had been discriminated against. Those states had to get federal officials to sign off on any changes to their voting rules before they went into effect.

In the 2013 decision, Chief Justice John Roberts said the country had changed. The court decided that the formula the federal government used to decide what states needed preclearance was outdated, citing the election of President Barack Obama, increased African American turnout in the South and more representative elected officials.

A comprehensive investigation found 31 cases among 1 billion votes cast nationwide from 2000 to 2014. In Texas, the attorney general uncovered one prosecuted case among 46 million votes cast over eight years. In Wisconsin, a federal judge said the “evidence at trial established that virtually no voter impersonation occurs in Wisconsin.”

When the Supreme Court gutted the Voting Rights Act, it didn’t do away with the whole thing. It said the formula the government used to decide what states were subject to preclearance was outdated.

All the U.S. Congress needed to do was update that formula. This used to be a bipartisan issue. The law was last updated in 2006 with support from Republicans. It passed 98-0 in the Senate that time and President George W. Bush signed it with enthusiasm.

Now, efforts to rewrite the formula – and make sure that states with a history of discrimination can’t get away with it easily – die for lack of support.

Computer security experts believe these systems are insecure and could be the target of hackers. The possibility is remote and it would be very difficult to actually swing the election. But Russian hackers already have been suspected of meddling in this election and seem to have a preferred candidate. Some experts think their goal might not be to tip the balance, but simply inject chaos into the system.

Why we’re focusing on voter suppression and fraud

By Andrew Donohue Reveal from The Center for Investigative Reporting November 7, 2016