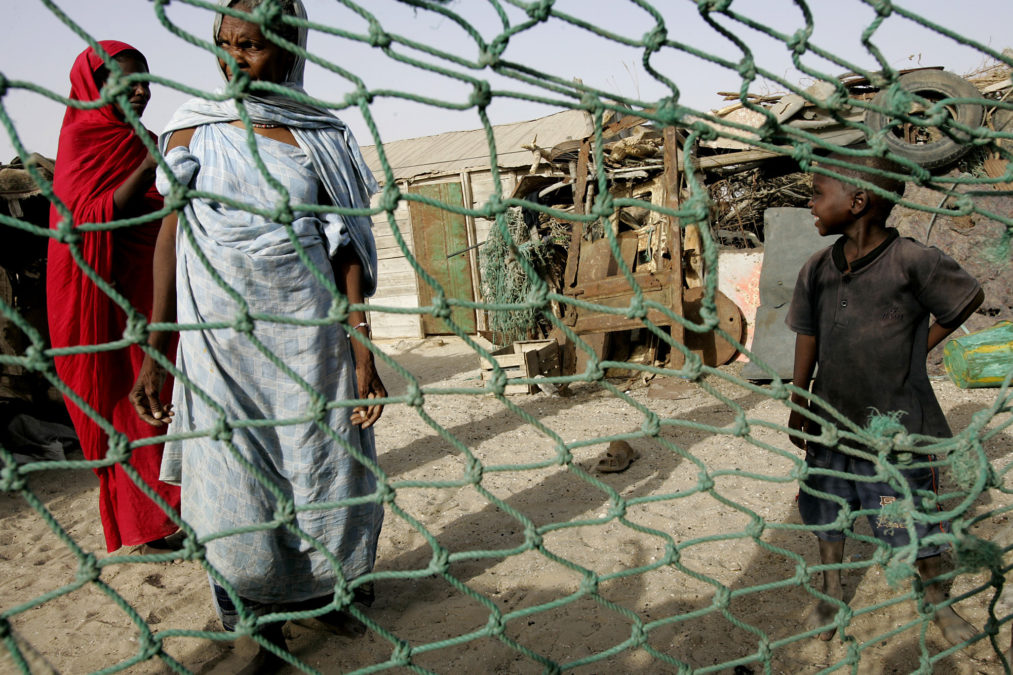 People stand outside their home in a poor neighborhood of Nouakchott, Mauritania in this 2006 file photo. The northwest African nation of Mauritania outlawed slavery in 1981, making it the last country on earth to formally do so. (AP Photo/Schalk van Zuydam, File)

In his native Mauritania, Seyni Malick Diagne was arrested and expelled to a refugee camp because of the color of his skin.

He fled to the United States in 2001 and settled in Columbus, Ohio, home to a growing community of black Mauritanians who escaped their country’s ethnic cleansing in the 1990s.

Diagne learned English and always had a job, his friends say, working at warehouses or clothing retailers. He volunteered on the weekends at a local mosque and taught children about their heritage.

Diagne, 64, is undocumented. His asylum claim was denied and an immigration judge issued a removal order in 2005. But he wasn’t a priority to Immigration and Customs Enforcement, so the agency “permitted Diagne to remain free from custody to pursue legal remedies in his case,” a spokesman said.

That changed on June 13, when ICE arrested Diagne. Seyni Malick Diagne poses for an undated photo taken by friends. After living 17 years in the U.S., Diagne was deported to his native Mauritania, where black people are often arrested, beaten and enslaved.

He is among dozens of Mauritanians who have been deported this year despite calls from human rights organizations asking the U.S. government to stop the removals. Advocates say black Mauritanians who were exiled decades ago aren’t considered citizens and face discrimination in a country that was the last in the world to abolish slavery in 1981.

Their deportations are a result of increased immigration enforcement under the Trump administration. ICE deported nearly 192,000 immigrants so far this fiscal year, a 9 percent increase over the same time period in 2017, according to federal figures released this month.

Diagne’s lawyers asked the Board of Immigration Appeals to stop his removal. Besides the risks awaiting him in Mauritania, he was also diagnosed with kidney cancer, according to court filings.

But the motion was denied. Hours before Diagne boarded a plane at Dulles International Airport on Aug. 22, his attorneys filed an emergency stay of removal with the U.S. Court of Appeals for the Sixth Circuit. It was too late: Diagne was deported that night.

“It was like hearing that somebody was going to die at any moment,” said Diagne’s lawyer, Julie Nemecek. “It is outrageous.”

The racial rift had existed for decades between the black and Arabic residents of Mauritania, located on the northwest coast of Africa. But the tension escalated in April 1989 when border disputes emerged between the Islamic nation and its southern neighbor, Senegal.

The government accused black citizens of being Senegalese and expelled tens of thousands into refugee camps, according to a 1994 report about the crisis by Human Rights Watch.

“In several villages and in the cities, security forces are reported to have tortured people for weeks before actually expelling them,” the report reads. “People were beaten after they had been handcuffed and had their feet tied together. Some were denied food for two or three days.”

Others were held in jails before they were taken to Senegal, their birth certificates and identification papers confiscated.

Among the detained was Diagne, a school teacher at the time, according to court records filed in his immigration case. He lived at a refugee camp in Senegal for six years.

In 1998, he returned to Mauritania and was “arrested, beaten, and tortured on two different occasions,” records state. Diagne came to the United States three years later and settled in Columbus, Ohio.

He doesn’t have immediate family in Columbus but built friendships with other West Africans in his community. His friends describe him as a quiet and religious man. Ahmed Tidiane met him In 2003 while they worked at a JCPenney distribution center. At the local mosque, they prayed together. In their conversations, Tidiane learned that Diagne had serious kidney problems.

But despite his poor health, he said, Diagne is “a hardworking person.”

“He was moving boxes, loading trucks,” Tidiane said. “Regardless of his failing health condition, he was very, very strong.”

During his first term, President Barack Obama directed ICE to focus deportation efforts on immigrants with serious criminal records. But that changed in January 2017, just days after Donald Trump was sworn into office. The new administration vastly expanded ICE’s discretion on arrests and removals.

The shift has been apparent within the Mauritanian community in Columbus. In 2017, only eight Mauritanians were deported, according to federal figures. As of Aug. 13, 81 have been removed, an ICE spokesman told Reveal.

The Atlantic recently visited their community of about 3,000 residents and spoke to Mauritanians who expect to be picked up by ICE and are putting their affairs in order. Human rights advocates have also warned the Trump administration of the challenges black Mauritanians face if they’re deported.

In a statement, Amnesty International asked the government to stop the deportations, citing the risk of enslavement. Estimates show that about 1 percent of the population, or roughly 43,000 people, are still enslaved.

Slavery abolitionist Biram Dah Abeid wrote in a declaration this summer that deporting Mauritanians “amounts to a death sentence for an entire population.” Several deportees, he added, have been arrested soon after arriving in Africa. Abeid was arrested himself in August by the Mauritanian government for his political speech, his supporters say.

Another challenge faced by deportees: Mauritanians who weren’t in the country in 2011 during a national census don’t have identification records.

“You would be hard pressed to obtain a passport, to obtain government services to which you might otherwise be entitled to,” said Eric Goldstein, deputy director of Human Rights Watch’s Middle East and North Africa division. Finding a job would also be difficult, he added, “especially in any public sector.”

When ICE arrested Diagne, he told the agency about his cancer, according to court records. He also told ICE about his Hepatitis B and failing vision.

But his lawyers say that Diagne did not receive medical attention while in detention. ICE didn’t answer Reveal’s questions about Diagne’s medical care. A spokesman said the agency “is committed to ensuring the health, safety, and welfare of all those in our care.”

“In accordance with ICE’s rigorous performance-based national detention standards,” he added, “the agency ensures continuity of care from admission to transfer, discharge, or removal.”

Diagne’s Aug. 22 flight had a stop in Morocco. One of his friends, Hamidou Sy, spoke to Diagne recently. This is what Diagne told him: After arriving in Mauritania, officers booked Diagne into a jail, where he lived in a cell with more than 70 men who were forced to urinate into plastic bottles and were beaten by guards.

After 13 days in jail, Diagne told Sy he bribed officials with about $1,500. He was released and a relative took him to Senegal.

“Everybody was worried,” Sy said. “Oh my God, what was going on?”

Have a news tip related to immigration for Reveal? Send it to border@revealnews.org.

By Laura C. Morel Reveal from The Center for Investigative Reporting September 24, 2018