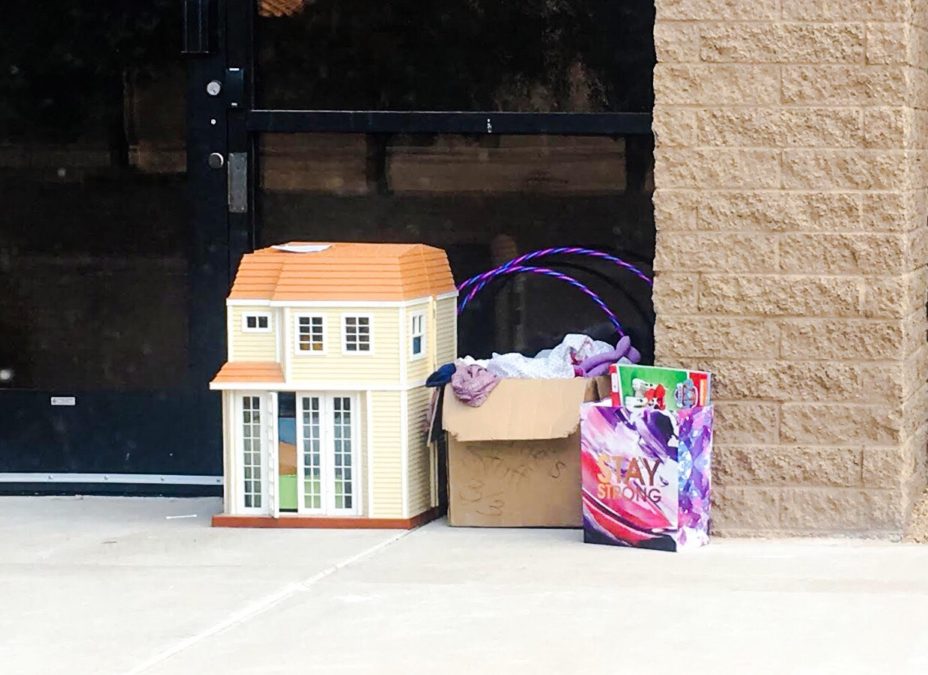 Donations left outside the one-story building in midtown Phoenix leased by MVM, Inc., where neighbors saw children being usher inside on June 4.

Following an investigation by Reveal from The Center for Investigative Reporting, officials in Arizona are calling for the closure of a Phoenix office building used by a government contractor to hold immigrant children.

Neighbors first saw immigrant children being ushered into the vacant Phoenix office building, which is leased by defense contractor MVM Inc., on June 4, Reveal reported Friday. Although it’s unclear how long children remained in that office, neighbors report they didn’t see children leaving until June 22. The building has only a few toilets and no showers, kitchen, yard, bedrooms or other facilities for children.

Following Reveal’s story, donations of toys in a sparkly purple gift bag with the words “stay strong” and a large dollhouse were left outside the one-story building in midtown Phoenix. A concerned Phoenix resident also contacted Reveal, stating he had reported the facility to the state of Arizona as an unlicensed child care site.

Videos shot by an alarmed neighbor show children dressed in sweatsuits being led – one so young she was carried – into the 3,200-square-foot building. The building is not licensed by Arizona to be a child care facility, and MVM has claimed publicly that it does not operate “shelters or any other type of housing” for children.

In a press release Sunday, state Senate Assistant Minority Leader Steve Farley stated that he and several other state and local officials plan to hold a press conference Monday in front of the building leased by MVM. Farley said the officials will call for closure of the “illegally-operating migrant detention facility” as well as “the implementation of more humane and just immigration policies from the Trump and Ducey Administrations.”

A spokesperson for the company called the building a “temporary holding place,” not a child care facility. MVM refused interview requests by Reveal, citing restrictions by the Office of Refugee Resettlement that generally limit contractors from providing information to the media.

It is unclear whether the company is violating any state or local laws in operating the facility. Any determination about whether the building must be licensed as a child care facility is up to the Arizona Department of Health Services. A department spokesman previously told Reveal that, in his understanding, the way MVM operated its office would make it fall under the state’s definition of a child care facility. But the office’s address isn’t currently licensed to operate as one. Operating such a facility without a license in the state of Arizona is a criminal offense.

“We are and always have been a land of opportunity for those seeking a better life than the ones they left,” Farley’s release stated. “That’s the American promise that brought us or our ancestors to this country. To dishonor that history is to also dishonor the spirit of our nation. The Trump Administration’s immigration policies must be more fair and just to live up to the values we hold dearest as Americans. … I will stand up to any officials who continue to separate families, delay reunification, or house and traffic migrants illegally or in poor conditions.”

Farley is a Democratic candidate for governor and faces his party’s primary in August. The winner of that race will face Ducey, a Republican, in the November election. Other officials expected to join Farley at the press conference Monday are Katie Hobbs, state Senate minority leader and candidate for Arizona secretary of state; Arizona state Rep. Lela Alston, and Phoenix City Council candidate Lawrence Robinson.

Phoenix City Councilwoman Kate Gallego, a candidate for mayor on the November ballot, issued a statement denouncing the use of the private facility to hold children.

“I am deeply disappointed that U.S. Customs and Immigration Enforcement has mistreated migrant children in our city, stashing them inside inadequate facilities not designed for the appropriate care of children,” Gallego’s statement says.

She said Reveal’s investigation “shows that children have been held by an ICE contractor in a nondescript office building wholly lacking in the standards under which facilities are licensed for appropriate childcare.”

“I have asked city staff to account for city codes that are being violated or have been violated by ICE’s practices. In addition, I will be asking the Arizona Health Services Department to investigate this matter to ensure appropriate standards are being practiced and that any violations be pursued. I am committed to ensuring the City of Phoenix does not enable ICE’s mistreatment of children in any way. Phoenix will always be a city that values the health and safety of everyone, especially children, regardless of the country of their birth.”

Carlos Garcia, a candidate for Phoenix City Council, also condemned the conditions under which the children were held in Phoenix. Garcia is a member of Puente, a group that advocates for immigrants’ rights.

“We know who Jeff Sessions and Donald Trump are and what they are capable of doing. They have ripped children from their families, criminalized the parents and put the children into cages,” Garcia’s statement says. “Now the question is to the City of Phoenix and any other jurisdiction in the country, ‘Are you going to be an accomplice to these crimes?’ We demand that the City of Phoenix immediately shut down these covert children prisons and immediately end cooperation with this racist administration.”

Neighbors told Reveal they did not see or hear the children during the three weeks. MVM told Reveal that the office was used for children waiting to board flights at the Phoenix airport, but didn’t know whether children stayed in the building overnight.

The company has a contract with ICE to transport children, and neighbors saw numerous white transport vans pulling up to the building to unload children there.

ICE confirmed to Reveal that it had entered into a contract with MVM. ICE spokeswoman Jennifer Elzea said the company “is authorized to use their office spaces as waiting areas for minors awaiting same-day transportation between U.S. Customs and Border Protection custody and U.S. Health and Human Services custody.”

Elzea confirmed that, according to the agency’s contract with MVM, the building is not for overnight use.

“The offices are outfitted to provide minors awaiting same-day transport with a more comfortable and private atmosphere than they might otherwise have at a public transportation hub,” she said.

While it is unclear whether any of the children were separated from their parents as part of Trump’s family separation policy, the ages of several children indicates that they it’s unlikely they arrived at the border by themselves. Several were toddlers, and one was too young to walk into the building on her own. Generally, children who have come into the United States as unaccompanied minors are teens and pre-teens old enough to navigate the perilous journey without a parent.

MVM holds a five-year lease on the Phoenix building and workers indicated to neighbors that the company planned to resume holding children there in the future. After the children were removed June 22, workers told neighbors they were repairing the air conditioning, while temperatures exceeded 100 degrees in Phoenix.

By Aura Bogado and Ziva Branstetter Reveal from The Center for Investigative Reporting July 8, 2018