All these ethics problems got overshadowed by Trump’s Paris decision 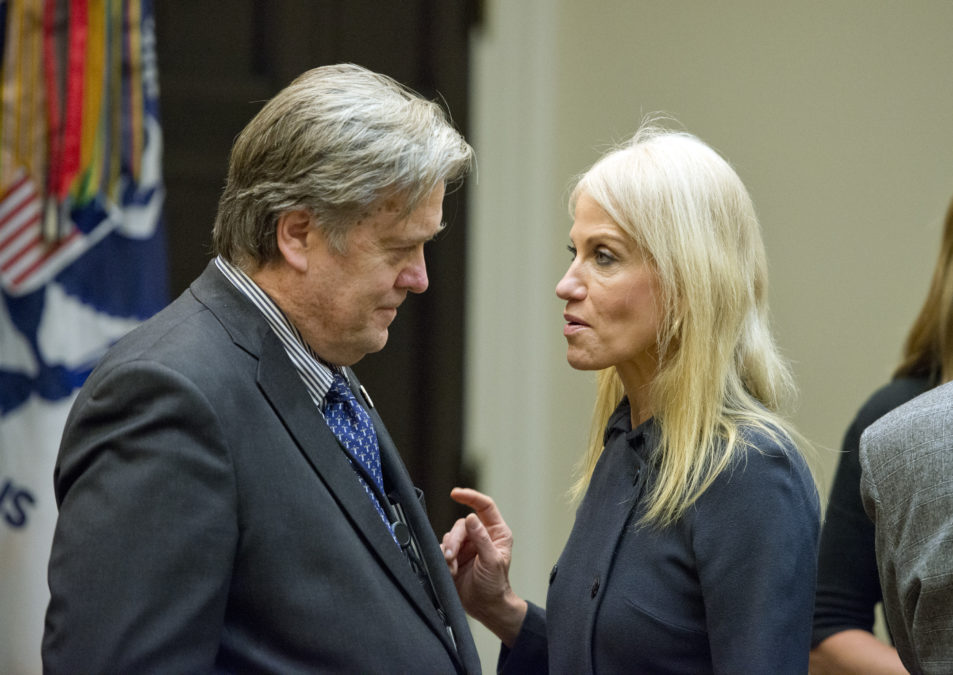 The White House blinked in its confrontation with Walter Shaub, the mild-mannered bureaucrat who heads the U.S. Department of Government Ethics.

And so the public now knows that President Donald Trump has exempted Kellyanne Conway, Steve Bannon, Reince Priebus and more than a dozen other top administration employees – including former Washington, D.C., lawyers and lobbyists – from complying with federal ethics rules.

The ethics waivers, which were issued by the White House earlier this year and made public Wednesday night, allow these officials to work on public business that affects the interests and financial bottom line of their former employers and clients, despite obvious conflict-of-interest concerns.

As part of his “drain the swamp” campaign rhetoric, Trump had vowed not to be beholden to Washington lobbyists or allow revolving-door dealing. Then he began waffling, telling “60 Minutes” the week after the election that working with lobbyists in the capital was unavoidable, because “the whole place is one big lobbyist.”

Once in office, Trump hired Washington lobbyists and lawyers into key positions, granted them waivers from a tough ethics policy he himself had signed, and then fought to keep the whole matter secret, even from the government ethics office.

But after receiving a 10-page letter from Shaub citing his office’s legal right to information about the ethics waivers, the White House made the list public.

According to the document, Conway, counselor to the president, is allowed to interact with “political, advocacy, trade or non-profit organizations.” Before the election, she ran a political polling and consulting operation with clients including the conservative activist organizations FreedomWorks and Americans for Prosperity.

Priebus, the former head of the Republican National Committee, can consult with the RNC in his new role as chief of staff.

The waiver that allows senior strategist Bannon to interface with Breitbart News, the flame-throwing conservative website where he was formerly CEO, may be problematic, The New York Times reported. The undated waiver appears to be retroactive, thus giving Bannon a way out from under a pending ethics complaint regarding his alleged contact with Breitbart since he joined the White House staff.

The Nation homed in on the waiver granted to Andrew Olmem, a White House special assistant for financial policy. The magazine reported that Olmem’s last stop before the White House was at Venable, a legal and lobbying firm where he represented the insurance giant MetLife.

MetLife faces a regulatory issue worth millions: its oversight by a panel called the Financial Stability Oversight Council.

As The Nation reports, the council was set up to determine whether U.S. financial institutions – insurance companies as well as banks – are “so big and interconnected that their failure could pose risks to the country’s economic stability.” Those that are designated by the committee are “subject to higher capital requirements and more stringent supervision.”

MetLife made the list, and has gone to federal court in an effort to get off.

In April, the president asked the treasury secretary to review the criteria used by the oversight committee to designate financial institutions for further scrutiny – an issue that MetLife raised in its lawsuit.

“Can the White House hire a MetLife lobbyist to work on MetLife issues?” the Nation asked. “Sure!”

What the ethics people say

For clean-government advocates, the White House disclosures were cause for concern. Noah Bookbinder, executive director of a watchdog group called Citizens for Responsibility and Ethics in Washington, said the waivers show that “this administration is chock full of senior officials working on issues on which they lobbied, meeting with companies in which they have a financial interest, or working closely with former employers.”

While the dispute was playing out, The New York Times profiled the government ethics chief, noting the bipartisan support that Shaub had received over the years for his efforts “to oversee ethical standards for 2.7 million civilian government employees.”

The piece described him as a “self-effacing career bureaucrat,” and also noted that Shaub keeps his office stripped of personal items because “I wanted not to be so attached to this office that I’d be afraid to lose it.”

His term expires in January, but Trump could fire him before then.

All these ethics problems got overshadowed by Trump’s Paris decision

By Lance Williams Reveal from The Center for Investigative Reporting June 2, 2017