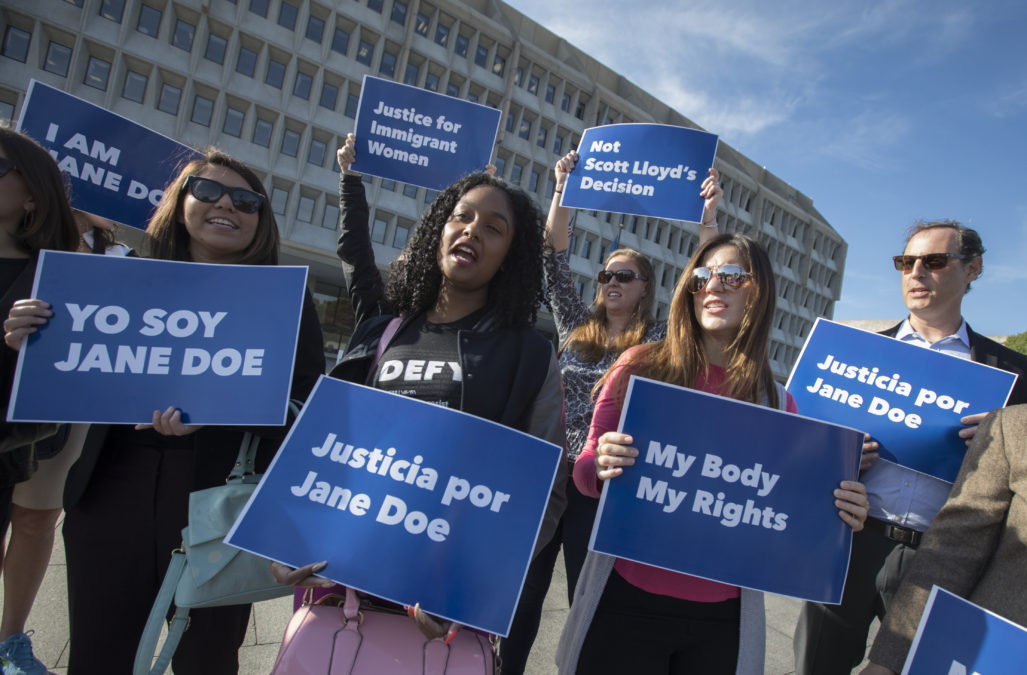 Activists with Planned Parenthood demonstrate Oct. 20 in Washington, D.C., in support of a pregnant immigrant teenager who is in federal custody and known in court records as Jane Doe. On Oct. 25, Doe got the abortion she was fighting for.

Update: This story was updated throughout Oct. 24 to reflect a new ruling by the appeals court reversing an earlier decision that prohibited Jane Doe from getting an abortion.

The U.S. Court of Appeals for the D.C. Circuit ruled Tuesday that the Trump administration must step aside to allow an undocumented teen in federal custody to obtain an abortion.
The ruling marks the latest reversal in the month-long effort by the girl, identified only as Jane Doe in court records, to end her unwanted pregnancy. The case challenges the Trump administration’s new policy against allowing abortion access for undocumented minors in its care.
The court in its ruling Tuesday left it to U.S. District Judge Tanya Chutkan to decide when the girl must be released from her shelter in Texas to get an abortion. The administration’s broader policy remains the subject of an ongoing lawsuit from the ACLU.

The appeal’s court’s decision reverses a ruling Friday by a three-judge panel of appeals judges, who ruled that Doe would not be immediately released to obtain an abortion.

That ruling stated that officials with the Office of Refugee Resettlement had until Oct. 31 to place her with a family member or another sponsor, at which point she would be free to get an abortion without further permission from the federal government. If the girl had remained in federal custody after that deadline under the prior ruling, the panel of judges said she could come back to court and ask again to be released to visit a clinic.

The case is the first legal test of a new policy quietly instituted in March by the Trump administration’s top refugee official, Scott Lloyd, against allowing girls in the agency’s custody to get abortions. Lloyd directed that shelters instead steer girls to religious pregnancy counseling centers.

At a hearing Friday, Circuit Judge Brett Kavanaugh suggested he was looking for a workaround to avoid addressing the policy’s constitutionality in the context of an emergency hearing.

“We’re being pushed in a span of 24 hours to make a sweeping constitutional ruling in one direction or another,” he said. “When that happens, the Supreme Court and this court often look to whether there are other avenues for resolving a dispute.”

By living with a sponsor instead of a federally contracted shelter, Doe would be free from Lloyd’s policy against abortion.

Kavanaugh asked lawyers for the girl and the Justice Department why she hadn’t been released yet. Catherine Dorsey, a Justice Department attorney, said one family member had decided not to take in the girl, and another potential sponsor was rejected by the agency because he was a single man.

“There were concerns about safety about having that person be her sponsor,” she said.

Attorneys for the American Civil Liberties Union, which is representing Doe, have argued for a quick resolution because the girl already has secured a state court order allowing her to get an abortion and missed two appointments at an abortion clinic because federal officials barred her from leaving the shelter.

“Every day she remains pregnant takes a toll on her physical and mental health,” ACLU attorney Brigitte Amiri told the judges last week.

Jane’s Due Process, the legal aid group that helped Doe secure the state court order last month, said in a statement that Doe has been trying to get an abortion for more than a month now and that the court’s previous deadline ran close to the latest date she could get an abortion in South Texas.

Texas bans abortion after 20 weeks, and Doe’s attorneys say she is already 15 weeks pregnant. To see a doctor who will perform an abortion after 17 weeks, they said, she would need to travel hundreds of miles to the north, past a Border Patrol checkpoint.

“Punting the issue for 11 more days is a further violation of her rights by forcing her to delay her abortion and later obtain a more invasive, lengthier, more uncomfortable and more expensive procedure,” said Susan Hays, the group’s legal director.

Circuit Judge Patricia Millett, one of the three judges who issued the ruling blocking Doe from obtaining an abortion last week, wrote in her dissent: “There are no winners in cases like these.”

“But there sure are losers. … Forcing her to continue an unwanted pregnancy just in the hopes of finding a sponsor that has not been found in the past six weeks sacrifices J.D.’s constitutional liberty, autonomy, and personal dignity for no justifiable governmental reason.”

Under federal law, the Office of Refugee Resettlement gets custody of minors who arrive in the country unaccompanied. Most are released quickly to family members or sponsors in the United States, but Jane Doe has been in a South Texas shelter in the custody of the U.S. Department of Health and Human Services since she arrived in early September.

“For however much time we are given, the Office of Refugee Resettlement and (Department of Health and Human Services) will protect the well-being of this minor and all children and their babies in our facilities, and we will defend human dignity for all in our care,” the agency said in a statement last week.

Doe’s case is just the first salvo in a class-action suit against the refugee agency’s new policy under Lloyd.

“A Trump administration appointee is using his position of power to try to force unaccompanied minors to carry their pregnancies to term,” Amiri said. “And we should all be shocked by that.”

Reveal reporter and producer Amy Walters contributed to this story from Washington.

By Patrick Michels Reveal from The Center for Investigative Reporting October 20, 2017