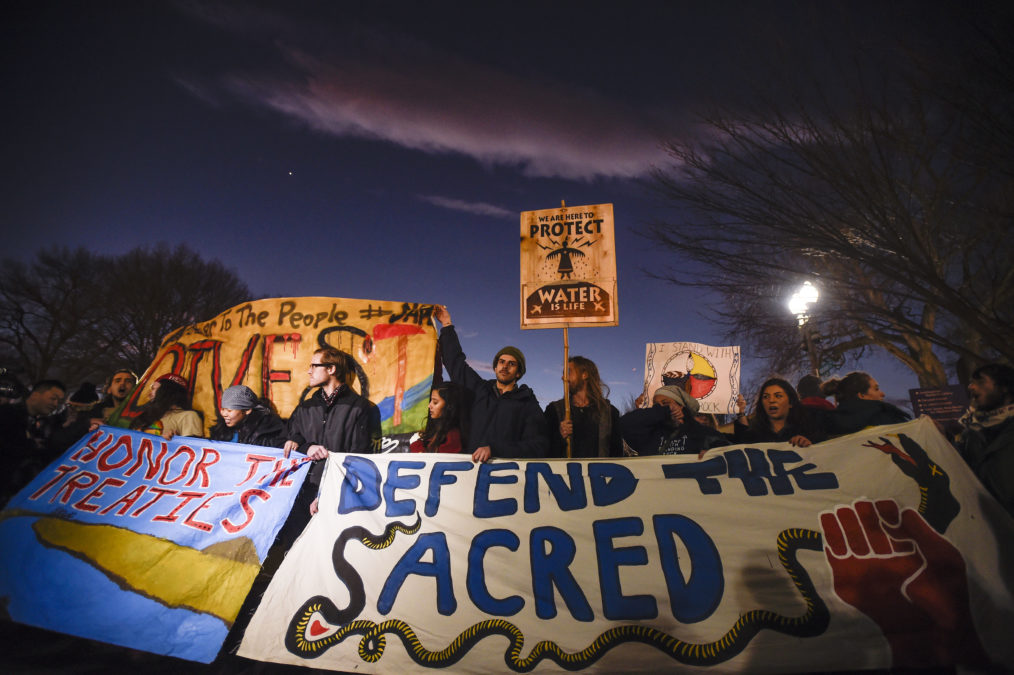 Demonstrators, including indigenous leaders and climate activists, protest on the north side of the White House, after President Donald Trump announced on Jan. 24 two executive orders that will advance the Keystone XL and Dakota Access pipelines.

In Fort Yates, North Dakota, where the Standing Rock Sioux Tribe’s headquarters are situated, I pulled into the parking lot as the tribe’s former historic preservation officer Tim Mentz was getting out of his tan minivan.

He agreed. The Standing Rock Sioux Tribe has been bracing for a more intense legal battle over the Dakota Access Pipeline ever since President Donald Trump was elected. Tuesday’s executive memorandum, symbolic language meant to further prop up Trump’s pro-energy agenda, was no surprise to tribal leaders. But it infuriated them, nonetheless.

Moments before the memo was to be signed live on national television, I was messaging with Jodi Archambault Gillette, a policy adviser to the Standing Rock Sioux Tribe and former President Barack Obama’s adviser for Native American affairs.  She’s also the tribal chairman’s sister.

I told her I was about to go on MSNBC, in case there were any comments the tribe wanted share. We exchanged light commentary about how the press interviews the press: “It’s never made sense to me either…LOL,” I wrote.

And then Gillette replied with a reminder of the group sitting at the negotiating table with Trump: Harold Hamm, Rick Perry, Kelcy Warren – some of the wealthiest tycoons in America’s oil industry. Warren, in fact, is the chairman and chief executive officer of Energy Transfer Partners, the company behind the Dakota Access Pipeline.

“The EIS (environmental impact study) process is ongoing,” Gillette wrote, referring to the Army Corps’ review of the pipeline and alternate routes, which just last month was viewed as a victory for the tribe and protesters.

But then she added a sentiment I heard from several others yesterday: “Everyone should fear the new rule of law, which is based on money, not on precedent.”

I’d like to thank Reveal from The Center for Investigative Reporting for initiating this blog about the situation unfolding at Standing Rock. The near year-long movement to stop what many call the black snake, swelled to as many as 14,000 people in early December. I’ve been chronicling the story for almost six months and last month I embedded myself full time on the reservation to watch what happened next. This platform will let me reflect on conversations and passing moments with key players like Mentz and Gillette, voices rarely heard, but relevant as we work to understand the impacts of a Trump administration on key issues that drew so many people here to protest – environmental justice, racial equality and an end to police brutality.

Even when the Department of the Army denied the easement to Energy Transfer Partners on Dec. 4 – for a time blocking the company from drilling beneath Lake Oahe and completing its $3.8 billion energy project – many here knew that this pipeline battle was far from over.

Since then, the Standing Rock camp population has dwindled to an estimated 800 people who continue to brave the subfreezing temperatures in their fierce resolve to stop the Dakota Access Pipeline. Earlier this month, the Standing Rock Sioux Tribe asked protesters to start planning an evacuation strategy; the area where their tents and tepees sit becomes a floodplain when the spring thaw begins.

Days later, as clashes between police and protesters resumed after weeks of calm, the tribal council voted unanimously to close the camps by Feb. 19.  Reports had surfaced of protesters, maybe infiltrators, turning violent on police. Meanwhile, elders and women reported no longer feeling safe or respected in the camps.

Trump’s recent actions have reinvigorated the fight at Standing Rock in new ways by providing tangible evidence that increasing oil production in the U.S. and opening up more lands for natural resource extraction was more than campaign rhetoric.

Menape Hocinci Ga, of the Dakota and Ho-Chunk tribes, an appointed headsman or traditional leader at the Oceti Sakowin camp, told me that it’s clear the issue now is so much bigger than Standing Rock.

“You have some people who are calling on others to come back and stand with us, but what they don’t realize is that this is an issue that affects us all,” Menape told me, referring to Facebook videos posted by other organizers in camps asking people to return to the reservation.

He went on to discuss Trump’s executive memos advocating for the revival of Keystone XL, the mega-pipeline that Obama stopped in 2015, and the president’s push to return actual production of the pipes back to the United States, which Trump characterized as “just like in the old days.”

“That’s going to impact our natural resources,” Menape said. “It’s no longer just about the oil. It’s all those mineral rights we have to make that pipe, that steel.”

By the word we, Menape meant the hundreds of thousands of tribal lands that Trump has suggested should be privatized for production.

“We’ve got more than just this one snake to fight,” he told me.

Just before the president signed the executive actions on Tuesday, Menape messaged me on Facebook with a statement from the Oceti Sakowin Headsmen Council, the five-member leadership support group.

The protesters, regarded here as “water protectors,” were calling for support, but in a different way.

“We are putting a call out immediately for allies and people to stand up where they are, mass civil disobedience as a showing of solidarity for Standing Rock.

“The fire exists within them and now is the time to let them reignite.

“The heart of Standing Rock beats everywhere. The fire has been taken by 10,000 potential organizers nationwide and we need you to hit the ground immediately. We are the revolution and the resistance continues.”

Last night, I watched the results play out across the country, with people filling the streets – chanting, singing and holding signs inspired from the original instructions drawn from the struggle at Standing Rock.

Some of them read: “Mni Wiconi: Water is Life,” “Defend the Sacred” and “We’re Still Here.”

By Jenni Monet Reveal from The Center for Investigative Reporting January 25, 2017