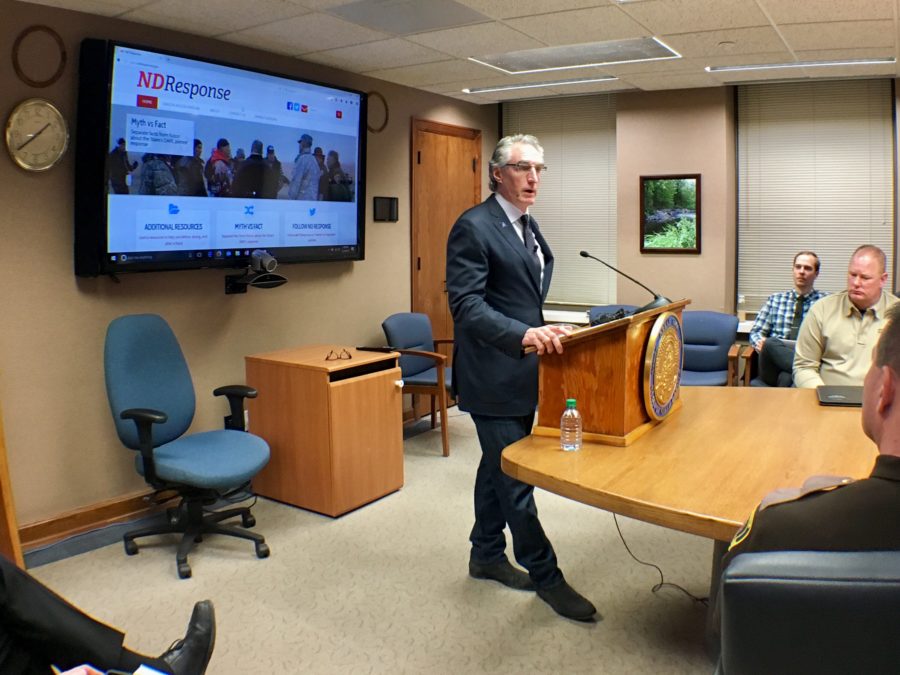 UPDATE, Jan. 27, 2017: This post has been updated to reflect a resolution filed in the North Dakota Legislature calling on the U.S. Congress to transfer oversight of Native American reservations from the federal government to the states.

He’s diplomatic and thoughtful; the kind of person who remembers your name even weeks after you’ve met him. He’s sensitive, or at least appears that way judging by how he choked up a few weeks ago while discussing the chronic rate of youth suicide in many of the state’s tribal communities.

On Wednesday, when he walked the halls of the Prairie Knights Casino and Resort on the Standing Rock Sioux reservation, most people saw Burgum as just an ordinary guy – and in some ways, he is. Before his landslide victory in November, taking more than 75 percent of the vote, Burgum had never served in political office.

“We never would have expected this from the last governor,” said Jeff Kelly, director of the tribe’s Game and Fish Department.

Kelly was referring to Jack Dalrymple who, in the final months of his leadership, was referred to as “Gov. DAPLrymple” by some for his ardent support of the Dakota Access Pipeline.

But Burgum, as charming as he may be, shares much with his predecessor.

He too, supports the hotly contested energy project. And on the day he met with a group of tribal leaders and members at the casino, the Republican governor had just signed his first bill: an $8 million loan from the Bank of North Dakota to continue funding the police force guarding the pipeline. He borrowed that move from Dalrymple, who racked up $17 million in debt to respond to the energy battle during the final months of his administration.

Discussed at the talks this week, which lasted nearly five hours, were items of unfinished business from Dalrymple’s administration – issues related to a roadblock that has hindered the tribe’s casino revenues and concerns over the safety of as many as 500 people who remain camped out in a known floodplain.

Voices were also raised about President Donald Trump, who a day earlier had tweeted a threat to the citizens of Chicago over its January gun violence statistics saying, “If Chicago doesn’t fix the horrible ‘carnage’ going on … I will send in the Feds!” Residents of Standing Rock had begun to worry about whether U.S. marshals would be sent to remove remaining protesters from the encampments.

“The members of this tribe don’t want to be caught in the crossfire of bullets and hate,” Standing Rock Sioux Tribal Chairman Dave Archambault II texted me.

Burgum tried to downplay the federal response to the ongoing demonstration, saying that any talks with the Trump administration were part of relationship building during this time of political transition. His comments were made at a press conference to unveil a government website, NDResponse, the state’s solution to fighting the public relations war over the pipeline.

“We have to quickly build those relationships with the new administration so that we can access the resources that we need,” he said.  Those resources, he said, were tied directly to clearing out the camps. “It means evacuating the camp and it means getting all the debris out before the flood.”

In a letter dated Wednesday, Archambault called for a “leader to leader” visit with Trump after several attempts to reach the administration had been ignored.

“I think we may have gotten off on the wrong foot,” Archambault wrote, reminding him that the public comment period behind the environmental impact study of the pipeline project is still underway.

But the environmental struggle at Standing Rock that gripped the nation now seems futile to some. Kelly expressed alarm about actions this week by the commander in chief, including the speed of his executive memorandum calling for the pipeline to be completed.

“Did you see how easily he wrote that thing for DAPL?” Kelly asked me. “And he lifted it up and he showed it to the cameras. Who’s to say that he might not do the same thing for Standing Rock?”

His comments got me thinking about the period known as the Termination era of the 1940s through the 1960s, when the federal government attempted to eradicate tribes altogether by stripping them of their federal recognition status, ending the sovereign nation-to-nation relationship with the government. In some cases, that approach was effective.

On Friday, two North Dakota state lawmakers introduced a resolution urging the U.S. Congress to transfer responsibility for reservations to the states, calling the current reservation system “flawed and obsolete” under the Bureau of Indian Affairs.

Jenni Monet is an independent journalist, blogging for Reveal from Standing Rock.

By Jenni Monet Reveal from The Center for Investigative Reporting January 27, 2017