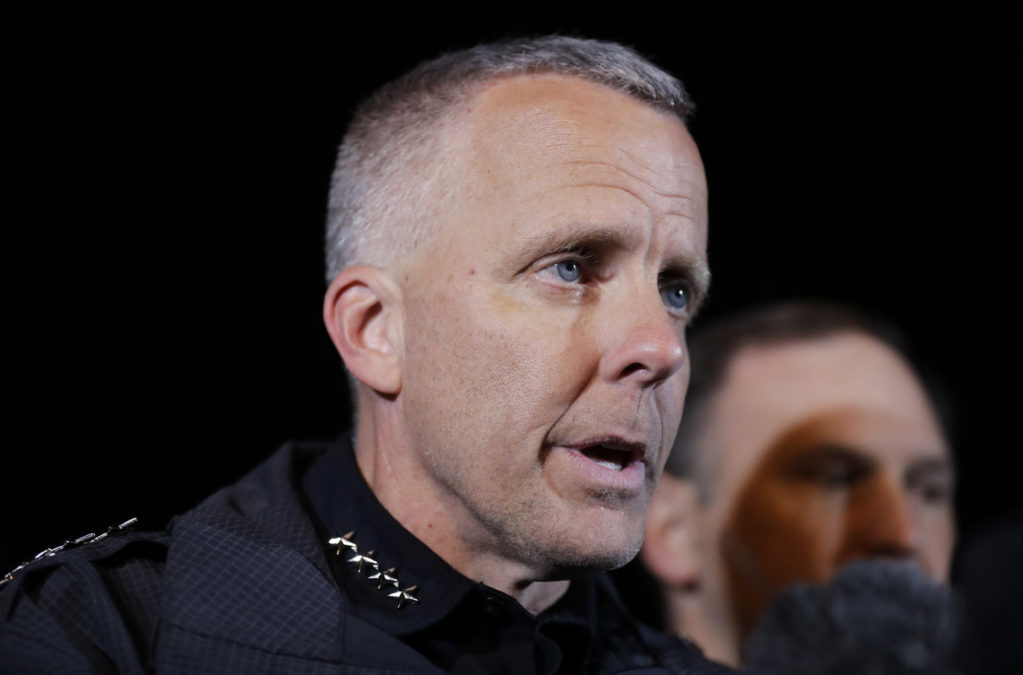 Austin Police Chief Brian Manley said the department will retrain every one of the 296 detectives who work in the department’s investigative bureau.

This story is a collaboration with Newsy and ProPublica.

The Austin Police Department will ask a third party to examine how it handles rape investigations from start to finish, following a state audit that found some cases were misclassified in a way that made it appear the department had solved more cases than it had.

The announcement follows the APD’s release of the full findings of a review by the Texas Department of Public Safety, which audited the department following an investigation by Newsy, Reveal from The Center for Investigative Reporting and ProPublica. The news report showed how Austin and dozens of other police departments across the country frequently use “exceptional” clearances to close rape cases, increasing clearance rates while leaving suspects on the streets.

The initial findings from the DPS audit, which looked at three months of Austin rape reports from 2017, concluded that nearly one-third of the cases the APD had exceptionally cleared were misclassified.

The full report reveals Austin police often failed on multiple fronts. To clear a case exceptionally, the FBI requires police to have enough evidence to make an arrest, to know who and where the suspect is, and for there to be a reason outside their control that prevents an arrest. Cases that fail to meet all four requirements cannot be cleared exceptionally. The DPS report shows that out of 95 exceptionally cleared rapes auditors reviewed, Austin police had failed to meet the FBI requirements 30 times. In 17 of those cases, police failed to meet at least two of the FBI’s tests. In five cases, police did not meet any of the four criteria.

“While we’re glad this audit has been completed, it confirms that we have serious issues and we need to take quick action that corrects the patterns that allowed these cases to be handled improperly,” Austin Mayor Steve Adler said in a joint statement with Mayor Pro Tem Delia Garza.

At a press conference Wednesday, Austin Police Chief Brian Manley said the department does not yet know who the third-party investigator will be, but he intends for the entity to look into how his department investigates rape from the earliest stages when a 911 call is received until a case is closed by investigators.

“We will welcome this outside review,” he said. “If there are things we can be doing differently or better to implement best practices, we will do so and we will look forward to doing so.”

Manley also announced he had ordered other changes, including the addition of another supervisor to the sex crimes unit and new policies for clearing crimes.

He said the APD has already completed the retraining of its detectives, a task the department said this month it would do after receiving preliminary findings from the state’s audit. Manley said one of the most significant reforms will be the introduction of a new computer system that requires detectives to answer four questions to show a case meets the FBI requirements before they can clear a case exceptionally.

The announcement of a new, more comprehensive review of the entire rape investigation process comes in the wake of pressure from rape survivors, advocates and City Council members following the investigation by Newsy, Reveal and ProPublica.

Some advocates were skeptical about Austin police choosing who investigates the department’s handling of rape cases.

“APD should not get to decide who grades them,” said Kristen Lenau, co-founder of the Survivor Justice Project. “In order for this to be a truly independent evaluation that builds much needed trust in this community, survivors and advocates need to be a part of the selection process.”

The department’s decision pre-empts an anticipated resolution from City Council member Alison Alter, who has said she is working with advocates to determine the most effective, credible way to dig into why so many rape investigations end with no arrest in Austin. The police department reported a 2016 rape clearance rate of 51 percent, well over the national average of 37 percent. But only 17 percent of rape investigations led to an arrest, according to internal records reviewed by Newsy.

A spokeswoman for Alter said she expects her resolution to be posted for public review by late Friday and to be voted on at the council’s next meeting on Jan. 31.

The spokeswoman said the resolution will direct the city manager to conduct a retrospective, comprehensive evaluation of the last seven years of documented sexual assault cases in Austin, to be carried out by a nongovernmental entity, one that doesn’t have a relationship with the APD.

Alter’s spokeswoman says the resolution “will not solely gather data, but also will direct the city manager to evaluate the health of our public safety system” and report back to the council with recommendations for how to better align with national best practices.

Many communities facing similar problems with rape investigations have adopted the “Philadelphia Model,” a process initiated by former Philadelphia Police Commissioner John Timoney, who approached the Women’s Law Project and other community advocates to ask for help in reviewing cases and restoring community faith in the police.

When Newsy, Reveal and ProPublica showed Manley the results of our data analysis last fall, he maintained that APD was correctly using exceptional clearance, pointing to an internal review.

However, the review – obtained by KXAN-TV in Austin – shows that police found about one-quarter of cases were improperly classified. Still, police maintained to us that they had discovered no problems until this week. Manley pointed to confusion among those on his staff who did the audit.

“I don’t believe they recognized the significance of the findings,” Manley said. “Most of us are police officers and not a lot have a background in statistics.”

Update, Jan. 29: On Friday, Austin posted Council Member Alison Alter’s resolution, which would require the city to conduct a comprehensive investigation into how nearly 2,000 rape investigations were handled by Austin police over the past seven years. It directs the city manager to find a “nationally recognized, non-governmental entity” that would examine at least 50 percent of all sexual assaults reported to Austin police in each year.

The evaluator would conduct interviews with sexual assault survivors from cases selected for review, along with speaking to both current and former police officers and others involved in the investigations. Survivors would be asked to talk about “their experiences with the investigative process.” The examination would also look to see if police are adhering to state and federal law as well as national best practices for investigating rapes.

“As policymakers we need to know the deeper root causes,” Alter said. “Behind the data is a victim and potentially future victims when the cases aren’t resolved.”

The resolution also directs the city to post “in a prominent place on the City’s website” a final, unredacted copy of the evaluator’s report.

This month, Austin Police Chief Brian Manley announced at a press conference he wanted Austin Police Department to hire a third-party investigator to do a similar review.  But by late Friday, Alter appeared to have gained Manley’s support for the resolution, which would have the city choose the evaluator in consultation with victim advocates. A spokesperson for APD said the department did not see a need for two separate third-party reviews.

Mayor Steve Adler texted to say the resolution “reflects a community united at all levels, in all ways” to improve rape investigations in Austin. “We will identify what we do well and where we must do better. And then we’ll act.”