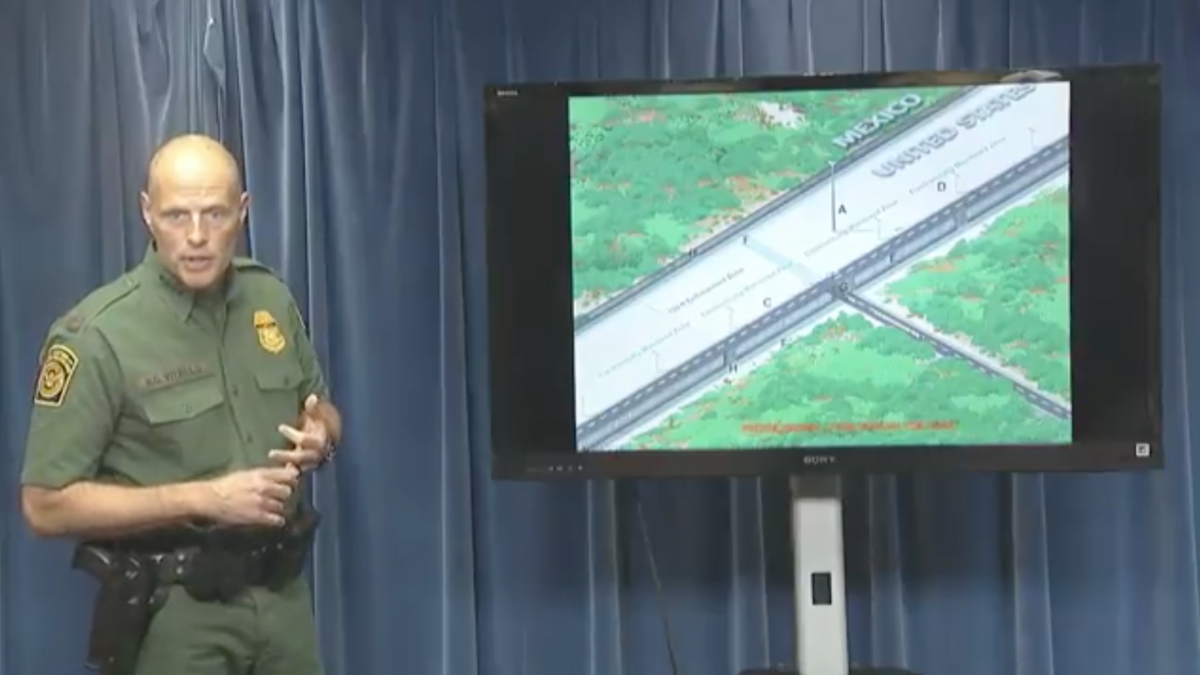 U.S. Customs and Border Protection Acting Deputy Commissioner Ronald D. Vitiello shows a mock-up of an area on the San Diego border where wall prototypes will be built.

UPDATE, Sept. 7, 2017: This story has been updated with information about companies chosen to build prototypes of border walls containing alternate materials.

UPDATE, Aug. 31, 2017: This story has been updated throughout with additional information about the companies chosen to build concrete prototypes.

Acting Deputy Commissioner Ronald D. Vitiello named four companies chosen to build 30-foot-long prototypes of a concrete wall. One of the them, Fisher Sand and Gravel of Tempe, Arizona, previously lost out on government contracts because of legal issues, including child pornography and tax fraud.

The big reveal, which Vitiello called “a significant milestone,” came after months of delays, most recently while the U.S. Government Accountability Office reviewed a protest from another contractor that had been eliminated.

The Department of Homeland Security had hoped to begin construction on prototypes in early summer. Vitiello said the agency would take a few weeks to negotiate the timing for building prototypes, at which point the companies would have 30 days to complete them.

In contrast to the numerous leaks in the early months of the administration about its border wall plans, Customs and Border Protection kept a tight lid on the chosen contractors, keeping even some senior leaders in the dark until the announcement.

The agency denied a Freedom of Information Act request for records pertaining to the bidding process submitted by Reveal from The Center for Investigative Reporting, which has appealed that decision.

The four that won the bids

While they’re not household names, the day’s big winners all have extensive experience in government contracting. None could be reached for comment today.

CPB said the separate “other materials” contract will allow the government to “evaluate the potential for new wall and barrier designs to complement the current wall and barrier used along the Southwest border.”

Fisher’s former president, David William Fisher, was sentenced in 2005 for possession of child pornography, including video of a 10-year-old girl he hired to work in his office.

Micheal Fisher, son of the company’s founder and a former vice president, along with the company’s longtime chief financial officer and comptroller, pleaded guilty in 2009 to a tax fraud conspiracy. The company’s current president, Thomas Fisher, wasn’t named in that indictment, but in a sentencing memo, federal District Judge Daniel Hovland wrote that “both Micheal Fisher and Tom Fisher” ignored their sister’s warnings about the scheme “and thumbed their noses at the federal government.”

Wyoming officials rejected a bid in 2008 amid concerns about the tax evasion case. In 2009, county officials in Nevada told the Las Vegas Sun that a decision to reject a bid for a highway contract was influenced by David Fisher’s child pornography charge. Clark County Commissioner Steve Sisolak called David Fisher’s crime “an insult to our society and innocent kids. … It was present, it was part of the fabric of the company.”

Of the border wall contract, President Thomas Fisher said in a statement: “We are extremely excited and grateful for the opportunity to be a part of this important project.”

Coming soon to San Diego: A wall of walls

The government chose to place prototypes at the eastern end of a section near San Diego, in an area already outfitted with lighting and roadways. That would allow officials to determine the wall prototypes’ functionality in a real-world environment, officials said previously.

Each successful bidder will build two mini-walls on-site. Full-size prototypes will be 30 feet long and at least 30 feet tall, towering over existing border fence nearby. Officials also will batter away at a 10-by-10-foot mock-up of each wall design to rate its resistance to vandalism.

Vendors not chosen will be able to lodge a new round of protests after today’s announcement, which could delay construction further. The earlier protest was dismissed after a 60-day review.

“We’re going to do this as fast as possible,” Vitiello said.

The agency has yet to announce its chosen vendors for a separate competition for a see-through wall design. Vitiello said he expects to announce those winners next week.

As controversy has swirled around Trump’s proposal to build a border wall, federal, state and local officials in San Diego for months have been planning for potential protests by activists once prototype construction begins. While the land where the prototypes will be built is federal property, the area surrounding it is a combination of private and public property owned by the city of San Diego and San Diego County.

“We fully support their right to peacefully protest,” said San Diego County Sheriff William Gore. “Hopefully, it will be small and peaceful, but we plan for the worst.”

After prototypes, a long road ahead

Funding for the prototypes comes from $20 million in existing money within the Department of Homeland Security budget.

Congress will consider allocating more money for the border wall when it reconvenes next week. Its plan tentatively includes reallocating $876 million from federal disaster aid to fund the wall, an idea that lawmakers might scrap given the cost of rebuilding communities devastated by Hurricane Harvey.

Civil liberties and environmental advocacy groups attacked the plans to move forward and the timing.

“Now is the time for this country to come together to protect all people,” Michael Seifert, a strategist with the ACLU of Texas and a member of the Southern Border Communities Coalition, said in a prepared statement. “Instead, this administration has chosen politics over people.”

Erecting prototypes is only one challenge the administration will face in trying to build more wall. The government will have to either buy or seize land from hundreds of private citizens, especially in South Texas. Behind the scenes, the Justice Department is gearing up to file the many eminent domain lawsuits that likely will be required.

As part of its 2018 budget request, the Justice Department is seeking to add more attorneys to aid in land acquisition. The department currently has about two dozen attorneys assigned to condemnation lawsuits and other land-related cases.

“This group is staffed to handle dozens of cases, but the anticipated increased workload, for construction of over 1,000 miles of fencing, walls and infrastructure to secure our borders, requires the Department to add experienced land acquisition lawyers to handle this influx of work,” Justice Department spokesman Mark Abueg said in a statement.

Amy Walters and Harriet Rowan of Reveal and Lauren Grandestaff of Investigative Reporters and Editors contributed to this story.

By Patrick Michels and Andrew Becker Reveal from The Center for Investigative Reporting August 31, 2017