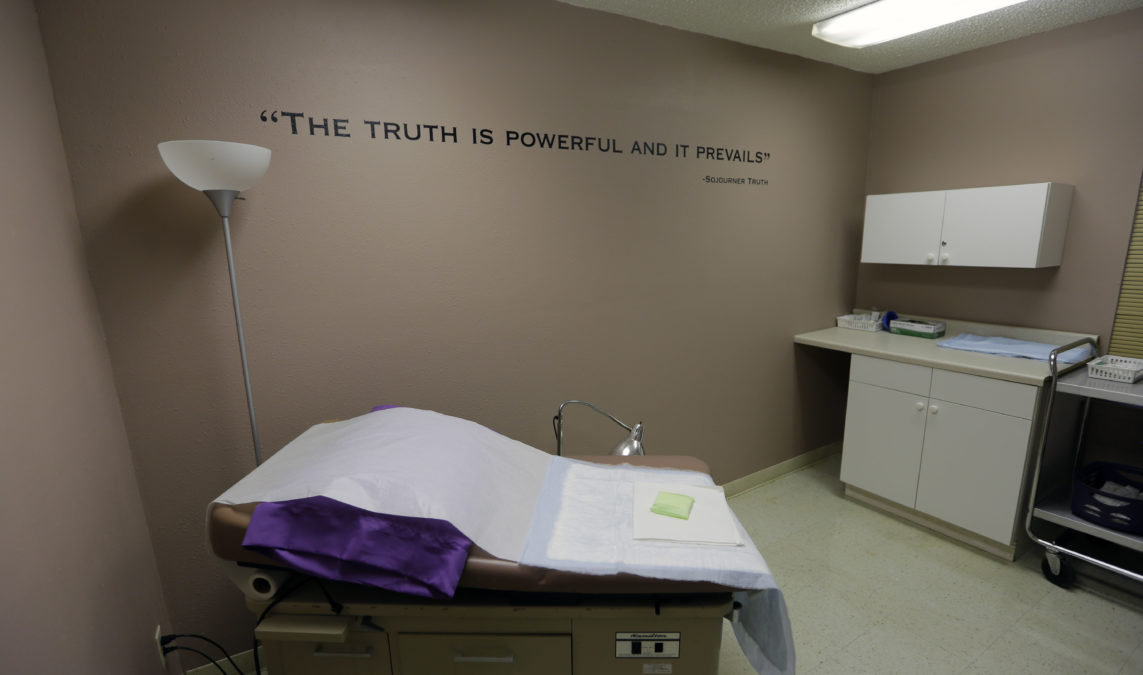 Officials at the Office of Refugee Resettlement have prevented a 17-year-old girl at a federally funded shelter in Texas from obtaining an abortion, according to a court filling. Pictured is an examination room for abortions at an Austin, Texas, clinic after a U.S. Supreme Court ruling last year struck down some of the state's abortion regulations, saying they were medically unnecessary.

A Trump appointee has prevented a 17-year-old migrant at a federally funded shelter in Texas from getting an abortion and directed she be sent instead to religious counseling, according to a motion filed in federal court last week.

Lawyers with the ACLU of Northern California will argue on her behalf at an emergency court hearing Wednesday in San Francisco. In court filings over the last few days, they’ve argued that changes at the Office of Refugee Resettlement under President Donald Trump are to blame and that the girl, referred to as Jane Doe, is not an isolated case.

According to emails filed with the court, the office’s new director, Scott Lloyd, has met with a minor in federal custody to discuss her pregnancy and directed his staff to counsel girls about the risks of abortion – an early sign of how Lloyd’s priorities will reflect his past work in anti-abortion advocacy.

In a declaration filed with the court, Doe explained that she decided to get an abortion and made appointments at a clinic but wasn’t allowed to go. Instead, she said, officials sent her to a crisis pregnancy center, where she was given a sonogram and “forced to look” at the image.

“Defendants have been talking to me about my pregnancy,” she said. “I feel like they are trying to coerce me to carry my pregnancy to term.”

Doe told the court that she is afraid to tell her family about her plans to get an abortion and had hoped to keep her pregnancy secret. But she said officials at the Office of Refugee Resettlement already had told her mother that she was pregnant.

According to the ACLU, Doe’s case exemplifies a new order of business at the office under the Trump administration.

On March 4, the office’s acting director, Kenneth Tota, sent a memo to the private groups that operate shelters under contracts with the office, telling them that they “are prohibited from taking any action that facilitates an abortion without direction and approval from the Director of ORR.” Tota referred to rules the office previously issued in March 2008.

Tota’s memo apparently was prompted by news that a minor at a contracted shelter had begun a medically induced abortion the day before. In his letter, Tota directed office officials to take that child to an emergency room and try to preserve her pregnancy over the child’s wishes.

On March 10, according to a heavily redacted email filed with the court, the office required that “effective immediately,” shelter operators must send word whenever a girl expresses interest in ending her pregnancy.

On March 14, according to another email filed with the court, the new director, Lloyd, offered some advice to his staff after visiting a girl in the office’s custody.

“Often these girls start to regret abortion,” he wrote, “and if this comes up, we need to connect her with resources for psychological and/or religious counseling.”

In another email, Lloyd told shelters to steer minors only to “pregnancy services and life-affirming options counseling,” not abortion providers. Lloyd reminded his staff that “the unborn child is a child in our care” and to make medical decisions accordingly.

On April 1, Lloyd directed Jonathan White, a deputy director, to make sure that a minor in custody in Arizona get an ultrasound and counseling at Choices Pregnancy Centers, a Christian organization that suggests abortion regret is far more likely than research suggests.

Such crisis pregnancy centers are engineered to persuade women to carry their pregnancies to term, often using myths, religious messages and bad science. These centers are well represented on a list of the office’s approved counseling centers also filed with the court.

It’s no coincidence that these directions were some of Lloyd’s first actions after he was appointed by Trump in mid-March. Before joining the office, Lloyd was an attorney for the Knight of Columbus, a Catholic charity, and served on the board of the anti-abortion Front Royal Pregnancy Center. In 2011, writing for the Center for Morality in Public Life, Lloyd argued that “the defining event in an abortion, as we use the term in our common parlance and in medical settings, is the death of a human being who has not yet been born.”

As a health and human services official under President George W. Bush, Lloyd championed a rule protecting health care providers who oppose abortion on religious grounds, according to This Week in Immigration. President Barack Obama undid that rule in the first year of his presidency.

But the Trump administration has ushered in new limits on health care in religious liberty protections, including last week’s decision to stop requiring employers to cover contraception in their health insurance plans. (Lloyd, writing in 2009, once argued that federal support for contraception would be a boon to abortion providers.)

Ahead of Wednesday’s hearing, seven attorneys general have lined up behind the Trump administration, led by Texas’ Ken Paxton, saying, “Texas must not become a sanctuary state for abortions.” Their brief argues that siding with Doe would suggest that “unlawfully-present aliens with no substantial ties to this country have a constitutional right to abortion on demand.”

Any minor seeking an abortion in Texas faces a number of roadblocks, even if she isn’t living in a federal shelter. Without a parent’s permission, a minor in Texas must get a judge’s permission to get an abortion, then make two separate appointments at a clinic at least 24 hours apart, the first for a mandatory sonogram. Doe already had navigated those steps and made appointments in the last week of September before federal officials intervened.

ACLU attorneys hope federal District Judge Laurel Beeler will order the Office of Refugee Resettlement to let Doe leave the shelter and end her pregnancy and to extend that protection to other pregnant unaccompanied minors in the office’s custody. Many children who arrive unaccompanied are fleeing abuse at home and face a high risk of sexual assault during their journey north.

Under a settlement in another court case, known as the Flores agreement, the federal government has to provide unaccompanied minors with medical care, including family planning.

By Patrick Michels Reveal from The Center for Investigative Reporting October 10, 2017